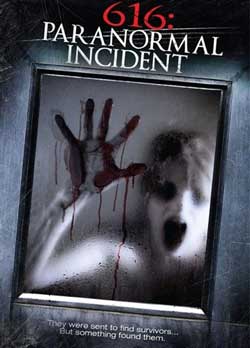 When Special Agent Watts and his Investigation Unit are called to the derelict Woodburrow Prison he thinks it’s business as usual. But there’s nothing usual about Woodburrow. A mysterious woman is found attempting to flee the scene and things begin to spiral out of control as an evil force picks the team off one by one. Soon Agent Watts is left alone to face what might be the world’s most powerful evil…The Devil.

This is going to be a difficult review to write. While watching this film I found myself becoming more and more irritated and what happens right at the very end almost tipped me over the edge.

616: Paranormal Incident is another found footage film. An FBI team are dispatched to investigate the sinister looking Woodburrow Prison to collect evidence and then destroy the building. The prison was once home to the criminally insane but the rumours are that the staff were even worse. Following the last warden trying to burn it down and kill everyone inside the whole place has been left abandoned. A previous team went in to investigate in the late 90’s but mysteriously disappeared. 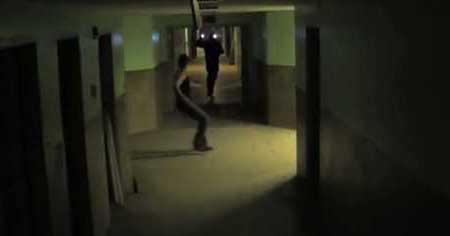 As the team splits up they are given high tech new sunglasses that have miniature cameras installed so that all their footage is recorded. They also install cameras at every corridor junction, every entrance and exit and generally all over the prison meaning that every move is monitored. As their investigation continues they discover a young woman who at first appears catatonic but when the commanding officer imprisons her behind some swirly salt pattens she becomes more than the team had bargained for.

So, the good points. On second thoughts, let’s skip that and move on to what’s wrong here. The main issue is that with found footage the audience must believe that the characters are not actors. This is fundamental. Otherwise any authenticity the film-makers are trying to engineer is lost and from the opening scenes this is the case. The script is leaden and awkward, the cast deliver their lines as if they have never spoken English before and for some reason the women are dressed as if they are about to audition for Tomb Raider. What’s more, none of them are in the least bit likeable or sympathetic and you find yourself hoping there going to get messily murdered as soon as possible. 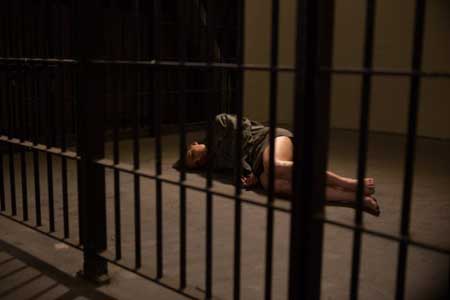 There are also scenes and plot points that are completely preposterous. If, and I’m giving nothing away here, the young woman they encounter is actually the Devil how is she contained by some swirly salt lines on one side of her prison? When she finally, inevitably, gets free she has the power to fling burly men, doors and anything she pleases around without so much as a second thought but some spilt condiments and a wall are enough to stop her in her tracks! And why has the Devil been hanging out in an abandoned prison curled up on the kitchen floor awaiting discovery? 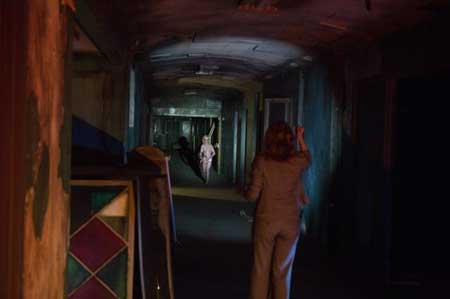 The sheer number of cameras used also detracts from the original premise. Every set piece is seen from several angles which spoils any of the ever so slightly creepy moments that do occur. Attempts at jump cuts fail miserably and the various character deaths are not remotely interesting or gory enough to hold your attention. 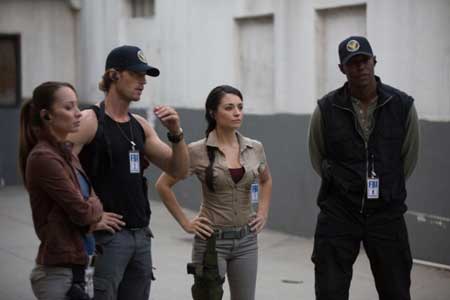 The thing is, and I may be in the minority here, I think there is life in the found footage genre as long as the original idea is a good enough one. Sinister may have had its faults but at least there was something new there. The problem is that the constant stream of poorly made and dull productions is flooding the genre and audiences are getting tired. In fact I suspect even the film-makers here knew this as at the very end of the film is the caveat that what you have just seen is a “dramatic re-enactment”. There is no possible way this was not an afterthought and comes across almost as an apology for what has gone before. 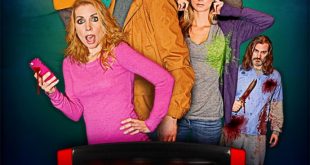