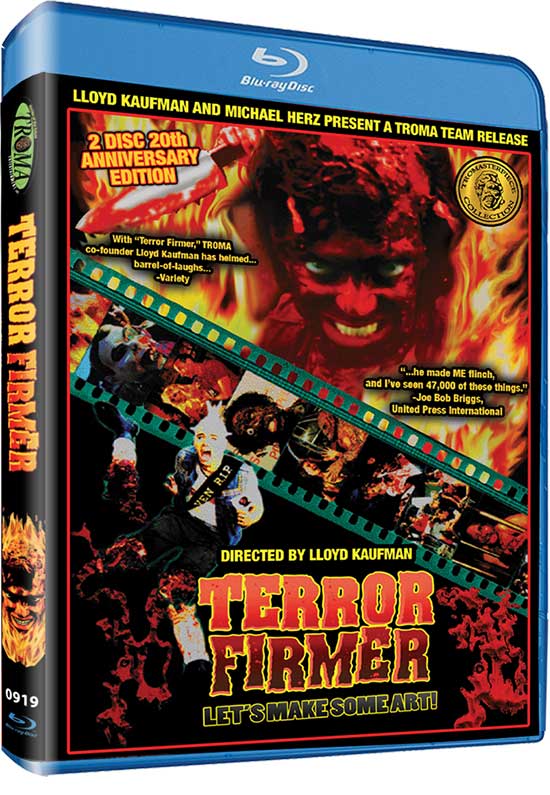 As a team of filmmakers attempt to get their latest movie made, a serial killer strikes, bumping off the cast and crew one by one. Can they survive for long enough to complete filming on the project? And can Lloyd Kaufman really manage to pull off a sensitive portrayal of a blind man? The answer to the latter question is, of course, no.

This is exactly what I imagine the set of a Troma movie to be like. Very loosely adapted from a book about film making by Troma’s head honcho himself (with help from Dawn of the Dead scribe and Super director James Gunn), Terror Firmer is everything you’d expect from a Troma movie and more. Well, it wouldn’t be Troma without that trademark excess. 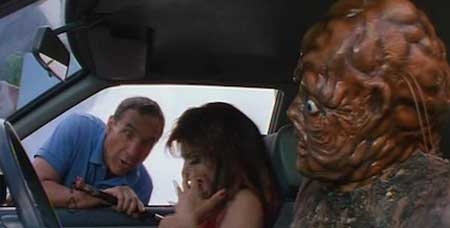 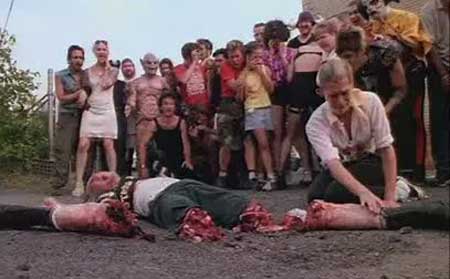 Goofy humour, gory violence, plenty of nudity and a complete disregard for political correctness; all this and more is present in Terror Firmer, a particularly ridiculous movie about a serial killer running amok on a Troma movie set. Kaufman plays blind director Larry Benjamin, who just desperately wants to make some art. Whether you’d class a Toxic Avenger movie as ‘art’ is debatable (I would, anyway) but it’s nice to see Toxie get his dues. The serial killer in question is an obsessed fan of Steven Spielberg and closet hermaphrodite, all of which is treated with the greatest sensitivity. No, wait, this is a Troma movie. The closest it comes to sensitivity is a spoof infomercial in which Lemmy from Motorhead and Trey Parker and Matt Stone explain the finer details of hermaphroditism. It’s worth a watch for Lemmy alone, while the South Park boys are a perfect fit for Troma’s sensibilities. 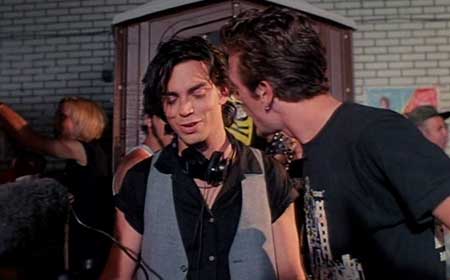 Elsewhere, the likes of Debbie Rochon and Ron Jeremy also pop up to distract as best they can from Kaufman’s mad gurning. Only Will Keenan really succeeds, managing to deliver the only performance which even approaches Kaufman’s in terms of scenery chewing and eyeball bulging. Kaufman’s depiction of Benjamin makes Andree Maranda (blind Sara in The Toxic Avenger) look positively subtle by comparison, or Ben Affleck’s Daredevil like an acting masterclass. Love or loathe his movies, there’s no denying that Kaufman is an incredible screen presence. It’s hard to ever be truly offended by a Troma movie, with that face mugging affably behind the lens. 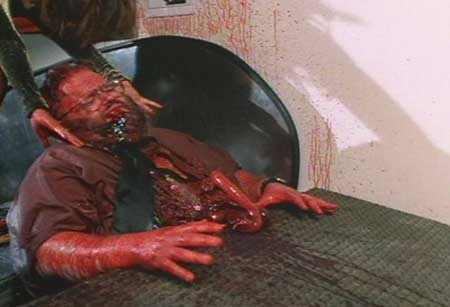 In front of the lens, there’s a lot to be grossed out by, though. Among the many death scenes is a particularly grisly one involving a fat man, an escalator and an axe. One or two horror films have done the stuck-in-the-escalator bit before, but Uncle Lloyd doesn’t let it go until the whole body (and its a big body) has been graphically swallowed in its (albeit chopped up) entirety. It’s telling that most of the death scenes in Terror Firmer have the onlookers throwing up everywhere during the aftermath. At times it resembles the infamous ‘chowder’ episode of Family Guy. Of course, vomiting isn’t the only bodily fluid being splashed about, even if it is the most freely available. There’s quite a bit of poo too, and a naked man running rampage through the streets, his tiny chode bared for all to see. 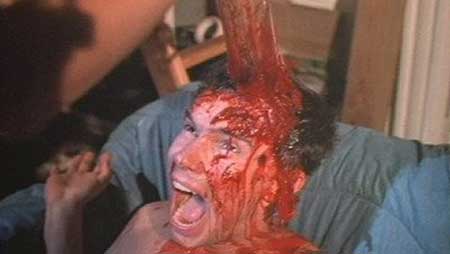 The story is almost non-existent, with the film moving from one disgusting set piece to another. It has nothing to do with the book Kaufman claims it’s based on, other than the fact that they’re both about the experiences of making a Toxic Avenger movie. Some will find the film’s constant self-referential in-jokes irritating, while others will be annoyed by the purposeful trashiness of it all. There’s something to wind up all sensibilities, although it’s hard to dislike any film which opens with a “cereal killer” joke. Geddit, because the dead body’s covered in breakfast cereal. Troma movies are an acquired taste, and Terror Firmer is no different. Those who love the brand, however, will find much to enjoy here. It finds the Troma team on very solid ground. No-one does bad taste quite like Lloyd Kaufman.