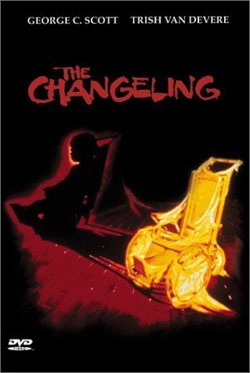 Director Peter Medak’s haunted-house tale stands as one of the most chilling stories to make it to the big screen. When composer John Russell (George C. Scott) loses his wife and daughter in a car wreck, he seeks solace by renting a secluded estate outside Seattle. But the mansion is haunted by the presence of a child who died there more than 80 years ago. Now, Russell must find out who that child was, and why there seems to be a cover-up now.

Nearly a decade before there was a seemingly endless archive of illegal downloads at your fingertips via the world-wide-web, I proudly donned the yellow and blue of Blockbuster Video. On many of my walks through the halls of cinema past, there were two video covers that caught my eye. The first was GINGER SNAPS and the second and most striking was Peter Medak’s 1980 spine tingler THE CHANGELING (ironically, both were films made in Canada and today sit on my short list of under appreciated genre classics). There was just something so unsettling about an old wheel chair covered in thick cobwebs. I knew right then and there that this was one movie that should not be watched alone. And, I was right!

Oscar denier George C. Scott stars as composer John Russell who moves cross-country from upstate New York to suburban Seattle after losing his wife and daughter in a tragic automobile accident. Russell rents a sinister looking Victorian mansion in hopes of finishing a new composition while slowly piecing his life back together. However, he quickly discovers that he is not alone. The house is haunted by the angry poltergeist of a young boy who was murdered many years ago. Appealing to his sense of lost, the spirit of the dead boy manages to communicate with him enough for Russell to piece together the murder mystery.

THE CHANGELING delivers on all cylinders. Medak’s skillful, understated direction breathes new life into an overly cliché sub-genre, the old haunted house horror/thriller. His style gracefully compliments George C. Scott’s powerful, yet subtle portrayal of a man who has experienced devastating loss. The rational minded, not easily frightened Scott is so convincing in his reaction to the mysterious happenings that take place in the house that it helps make every element of the plot more believable as well. It also helps that this film was loosely based on alleged real-life events, being co-screenwriter Russell Hunter’s experience living in the Henry Treat Rogers Mansion in Denver, Colorado. The Victorian mansion is like a character in itself. Rarely, if ever, have I witnessed such a flat out scary looking house.

It is even creepy in the daytime. Yet, there remains a certain forgotten beauty to it as well. This is the setting for some truly bone chilling moments. In my favorite scene (perhaps my favorite scene in an horror film), John Russell hears the loud echoing bounce of a rubber ball rolling down the epic staircase. Russell picks up the ball and looks at it. This harmless rubber ball belonged to his dead daughter and every time he sees the ball it is a brutal reminder of her tragic death. So, Russell drives to the nearest bridge and throws the ball into the river, symbolizing him moving on with his life. When he gets back to mansion, as soon as he walks in the door, the exact same ball rolls down the stairs and stops dead right before his feet. It is truly terrifying in the most simplistic and subtle way imaginable. There is also a great séance scene where the ghost of the dead boy communicates through a spirit medium. Despite being one of the best haunted house movies ever made, THE CHANGELING is not without flaw. The film lacks a clearly defined antagonist.

The true villain is the father who murdered the young boy. But since that character was dead before the events in the film began, there is never any real conflict between Russell and the dead boy’s father. In some ways the ghost of the dead boy is an antagonist. However, you feel so sorry for the boy that most of his attempts at revenge seem justified. Lastly, we come to the changeling himself, the wealthy senator who was the one who benefited most from the boy’s murder. Yet, we never find out if he had any knowledge of his adopted father’s actions therefore I was sympathetic toward his realization that he was in fact an imposter.

Overall, I highly recommend THE CHANGELING to anyone who loves
good, old fashioned horror movies—the kind that get labeled suspense thrillers today because marketing executives view “horror” as a dirty word. George C. Scott is a terrific actor and I would love to see other Oscar caliber actors make horror films based on quality material. In terms of haunted house movies, perhaps only Kubrick’s THE SHINING is superior.