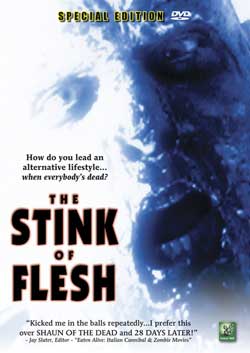 Wandering a zombie wasteland, Matool survives by his wits and animal instinct, often employing his trusty hammer and gigantic nails to fend off the ravenous hordes of flesh-eating undead. But when he is kidnapped by a mysterious couple, Matool must rely on an entirely different weapon in his arsenal to survive… Written & directed by Scott Phillips (screenwriter of DRIVE), THE STINK OF FLESH is a no-holds-barred splatterfest featuring non-stop action and buckets of gore. 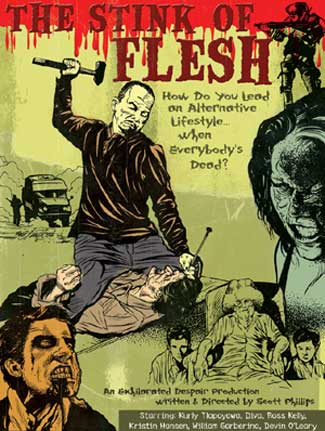 Hell-o, gore mongers of the cinematic wasteland. Today’s review is for a three layered zombie pizza called The Stink of Flesh. Why do I use a decorative dough pie to describe this film? I’ll just start out by honestly and brutally saying… The acting is Mozzarella. The plot is Fennel. The music is Cheddar and the over-all outcome of this micro budgeted zombie/ sex flick is pure cheese. So much cheese, that it hurt my stomach just trying to digest the whole thing in one viewing. The only redeeming factor in the zombie atrocity is some of the “Horror-ish” score.. I for one, am not a zombie fan as I was when I was a kid. I loved them back then.

Now, the whole genre has been kind of driven into the grave for me.. If there is one zombie flick I would like to see, it would be Dawna of the Dead, due to its controversial following and subject matter. Sadly, this is not that film. With that being said, here we go… 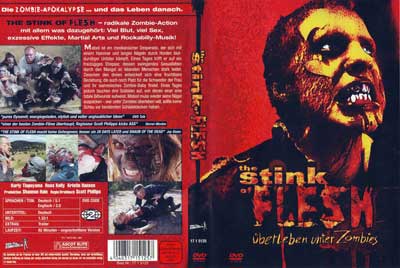 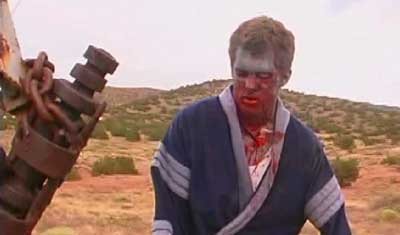 The film starts out showing a woman wanting some satisfaction. From there, it cuts to a single man, fighting off a horde of flesh eating zombies. It freezes frame and verbally introduces him in an extended whisper as “Matool.” He rescues a woman from a car, but leaves her brother out in the wilderness to fend for himself within the gang of flesh hungry, living dead creatures. She is then put in an even more frightening situation as her avenging hero, Matool and an old, homosexually perverted man begin to eyeball her in a most uncomfortable manner.

Matool then tries to get her in the back room with him for a little payment for his services in rescuing her. She, of course, is disgusted by this and pushes him away. She then finds the old man to be a sweetheart for a comment he makes and tries to compliment him. His reaction to her comment was “You wanna go in the back room?,” the same gesture that her hero had just offered. She is now fed up, really disgusted and is determined to find her brother, so she escapes the shed and well, the zombies are waiting. 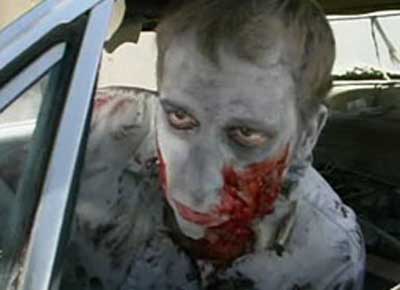 A short while afterwards, Matool is hit by a truck, tied up and taken to the house of the woman at the beginning of the film. She wants to have sex with him as her husband watches. Her husband is in fact the one who ran Matool down and captured him in the first place. Of course, sex follows… Her husband watches as Matool nails his wife, just as he did the zombies before her. Matool is eating the act up as he asks her husband if he likes it as he watches. Along with the sex crazed wife is a woman and her conjoined and deformed sister. It kind of reminded me of Basket Case. She too is looking for nothing but a good time. This film is said to be a zombie/sexploitation film. I see the zombie part. The sexploitation, I thought could have been a little more intriguing. 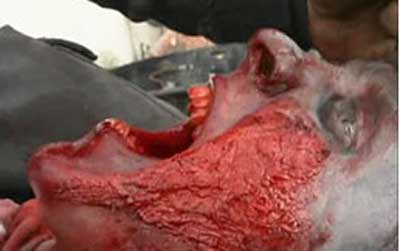 The make-up for the zombies was not all that great and nothing that we haven’t seen before throughout the years. The special effects provided, although providing a high gore score for the feature, fell flat all the same. The blood shed looked like someone holding their thumb over a garden hose as the blood splashed out and suffered from discoloration. It began to look like pink water the more it was spewed forth from the (mostly by hammer and nail inflicted) wounds. About the only redeeming factor of effects I could point out would be the dismemberment of the unfortunate zombie victims. Lots of guts and entrails galore… Which for any zombie flick, is not that hard to come by or pull off. They can be purchased at your local meat market. Although grotesque, still not all that impressive. Some of the zombies’ skin tone looked almost as if it were a “Smurf Blue.” Before watching this, I had wondered where “Brainy” had been after all these years. 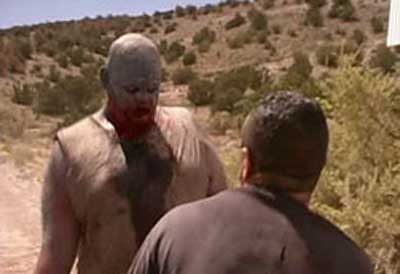 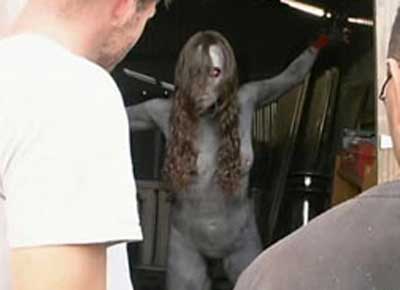 The music went from rip-off Surf Punk… to rip-off Leonard Cohen. The scored Horror theme was decent. There was another score-ish piece that included double bass, drum machine sounding spurts in every other bar. Over all… I said it once before and I’ll say it one more bloody time before departing… If you want cheese, you’ve got extra f*cking cheese…. and straight from beyond the grave. If you are looking for a good zombie flick, stick to the Fulci or Romero classics. Possibly check out the new breed of Texas made zombie movies or wait for the next generation of zombie movies… Corpse. I give this film, The Stink of Flesh, THE FINGER.

Until the next time, this was Jay. Keep one foot in the grave, one fist in the guts and your eyes out for gore. Later.

The Stink of Flesh