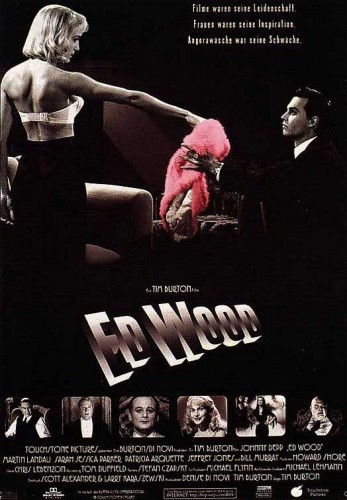 SYNOPSIS:
“You are interested in the unknown, the mysterious, the unexplainable. That is why you are here. And now, for the first time, we are bringing to you the full story of what happened, on that fateful day. We are giving you all the evidence, based only on a secret testimony, of the miserable souls, who survived this terrifying ordeal. The incidents, the places. My friend, we cannot keep this a secret any longer. Can your heart stand the shocking facts about…Edward D. Wood Junior? (courtesy IMDB)

REVIEW:
In the real world, a person with a skewed vision of life will end, not as a beloved millionaire like Forrest Gump, but penniless and mocked – much like writer-director Ed Wood. But while it’s emotionally wrenching to watch the fictional Gump push beyond his limitations, witnessing the deliberate unraveling of the failed auteur’s hokey visions is an inspiring revelation, making Tim Burton‘s bent biopic Ed Wood (1994) one of his best films ever.

Brilliantly played by Johnny Depp, the oddly charismatic Wood is a spectacularly optimistic nobody with more than a mild penchant for the Tinseltown limelight – he thirsts for it. But while his intentions are pure, replete with the promise to bring his friends along for the ride, Wood’s tastes and talents are, to be straightforward, crap. No amount of hacking can save his hoary scripts, and the resulting films are easily mistaken for gag reels by the studio heads that he so desperately wants to impress. But director Burton and screenwriters Larry Karaszewski and Scott Alexander are not here to exploit Ed’s infamy as the world’s worst director, no. Instead they focus on the creative passions and personal turmoils that made him such an interesting failure – as opposed to thousands of forgotten filmmakers who disappeared before and since. 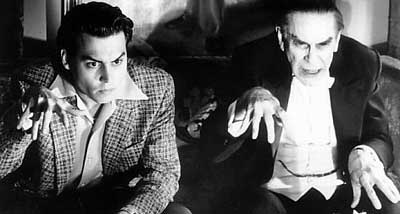 Key to this is Wood’s relationship with his idol, Bela Lugosi (a marvelous Martin Landau), whom he befriends in the fallen actor’s last addiction-ridden years. Mannered yet malignant, the occasionally suicidal Lugosi is Wood’s only tie to the Hollywood of his dreams. Though they’re polar opposites, the two forge a relationship first of symbiosis – mutual exploitation – and then of desperation as they try, respectively, to forge a career and to survive one. Particularly harrowing is Burton’s depiction of Lugosi’s final morphine-fueled disintegration. Forced increasingly to depend on Wood who, at that point, had nothing to offer but his friendship, the lonely and hopeless actor is given kindness and respect by the director until his death – the scenes playing out like some bizarre flip-side to the relationship enjoyed by Burton and my old pal Vincent Price. One of the few disappointments I had with Ed Wood is that this unique friendship ends too early – the rest of the plot is not as strong in comparison.

So what does all this prove – beyond the fact that Ed Wood was a nice guy, that is? That he had the virtue of perseverance, which was also the reason Wood got any of his films made at all. Shaky as his concepts of good cinema may have been, it was his unwavering drive that drew Wood’s motley crew of stock actors and conspirators to him like moths to a flame. Like them, Wood had fantasies of fame – but he was willing to chase his fantasies over cliffs. Through him, they could be something else, much as he could by the way of fluffy angora wool sweaters. Lugosi could again be a star, Tor Johnson could be an actor, and my old friend Vampira employed. 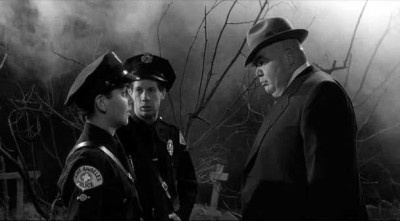 With another director, Ed Wood could have easily strayed into sentimentality, heaping pity on these self-deluded misfits. But because Burton identifies so closely with Wood’s desire to depict misunderstood outsiders – hilariously illustrated as Wood confesses his transvestite nature while pitching his idea for Glen Or Glenda (1953) to a shady producer – the film never stoops that low. In fact, despite his ultimate failure, Wood is depicted almost heroically, with warmth and humour, the picture concluding with the high-point of his career, the premiere of Plan Nine From Outer Space (1959). 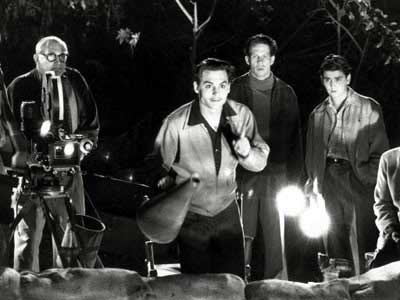 Visually, Ed Wood is an ingeniously low-tech and relatively low-budget ode that pays homage to Wood’s own meagre budgets and cheaply creepy art direction – reviving the ‘Let’s put on a show!’ enthusiasm that so many filmmakers lose after helming a few studio-financed films. And fortunately, Steven Spielberg isn’t the only director in Hollywood who can get a black-and-white film made. The lusciously textured, intentionally static cinematography beautifully recreates the feel of Ed Wood’s seedy underbelly world.

Although the film is quite faithful to its original source (the first half of the book Nightmare Of Ecstasy: The Life And Art Of Edward D. Wood Junior by Rudolph Grey), screenwriters Karaszewski and Alexander take a few liberties with a couple of the characters. The first error is the character of Delores Fuller. Delores loved Ed very much – she was definitely not as bitter as she’s portrayed in the film when Ed admitted to being a transvestite, and when she failed to be cast as the lead in Bride Of The Monster (1955). It was a surprise, yes, but I hardly think it drove her to the brink of insanity. 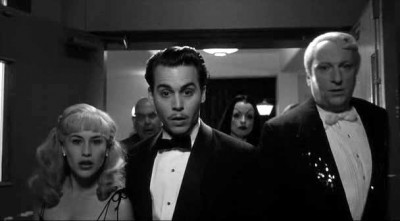 The second character mistake was of my dear old friend Vampira aka Maila Nurmi, who is portrayed as a rather malicious, snobby bitch. I first met Vampira on a train on the way to Los Angeles. She was eating her ticket at the time. I discovered afterwards she was nibbling out the date before the ticket collector came. I said to her “Why don’t we start a double-act together? Do you know a little joke?” She said, “Yes – you!” So I guess she didn’t. Anyway, I handled the money, we split everything straight down the middle, sixty-forty. I got the sixty, of course, because as her sofa I had more screen time. Not that it was that bad a job…ahem – that’s how it all started, and she’s insulted me ever since. Decades later, when I was entrusted with hosting The Schlocky Horror Picture Show, I was delighted to have the opportunity to emulate Vampira, having studied under her – and behind her – and from a few other angles. She set the high standard to which all horror hosts aspire, but so few reach.

I seem to have strayed a little from the subject at hand. Let me just wrap-up by suggesting you watch Ed Wood with Tim Burton’s misunderstood film Mars Attacks! (1996). Despite being classified as a lesser effort from the imaginative Mr. Burton, many film-goers forget that he walked onto the set of Mars Attacks! straight after completing Ed Wood, and was still in an ‘Ed Wood’ state of mind when making Mars Attacks! The end result is not unlike the film Ed Wood would have made if he was ever given a hundred million dollars to play with. And it’s with that thought in mind I’ll ask you to please join me next week when I have the opportunity to give you another swift kick in the good-taste unit with more terror-filled excursions to the dark side of Hollywood for…Horror News! Toodles!