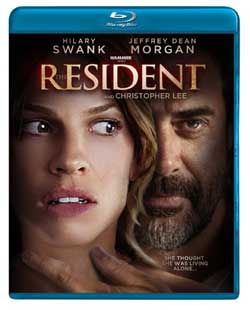 When a young doctor suspects she may not be alone in her new Brooklyn loft, she learns that her landlord has formed a frightening obsession with her.

The Resident, a new release under the wing of Hammer films, features the re-occurring Hammer favorite Christopher Lee playing the role of tenant August with our focal characters Jeffrey Dean Morgan as Max the landlord and the ever alluring Hilary Swank as Dr. Juliet Dermer. Juliet is a young doctor who had relocated to New York under the relationship promise of joining her “now” ex boyfriend. Finding herself working long hours, under duress and alone she comes across a dream apartment that seems to good to be true for the view and condition it’s in. It’s Max who makes every effort to make her feel at home and comforted right form the start. Though as the drama thriller evolves, it is clear that not is all as it seems. A dark secret is quickly coming to the surface about Max and the place and in the meantime a relationship begins almost immediately

The movie succeeds in an almost “Hitchcockian” approach with voyeur type shots, careful dramatic zooms and an eerie underlying score. What is unique is that even though we connect a Michael Keaton-like eerieness to Max right away, we are given a resolve really early on. Meaning that we begin to see his habit for creeping around Juliet’s apartment sooner than later and a reverse perspective of situations past. This aspect probably drew me in even more due to the resolves suggesting that much more was bound to come in this spiraling thriller approach. It is thru dialog hints that we also foreshadows a situation in progress as they converse about secrets, about pasts with dark beginnings and an almost too convenient meeting up at times in random locations.

Hilary Swank is believable and vulnerable all rolled in one. While she possesses a certain character that always alludes to multi levels, she is a beautiful to behold in the process. Her victim-like stance seems only countered by her strong will and determination. Jeffrey Dean Morgan on the other hand whether its a thriller or not always presents a certain amount of “he’s up to something” whether it’s intended or not. Though his performance in this case seems to be a perfect match that like before mentioned could have been easily played ed by Michael Keaton in the same vein. Maybe it’s that 1990 “Pacific Heights” movie that keeps me coming back to apartment thrillers though for me it sort of set the stage for everything after to come.

As “The Resident” winds its way forward, it begins to take a direction into the familiar zone. That zone though is still done with high suspense and dramatic tension. But as viewers, we probably will connect largely on the “we’ve seen this before” vibe which revisits the idea of a stalker, psycho love interest or tenant with way too much time on his hand and access to too many nooks and crannies. The film has its moments of extreme horror especially when Juliet finds out what Max has been doing in his spare time. Director Antti Jokinen takes all these elements in pretty well while managing to throw a few curve balls that we didn’t see coming. The direction and framing combined with the talents of the lead actors is what sells the film into a worthy night of viewing. I’d love to see Hilary take on alot more of these thriller | horror films as she is able to leap from victim to aggressor to victim pretty easily without missing a beat. The movie might make you think twice about all your apartment holes and even what’s going on when you aren’t home. At first I thought it weird to put Jeffrey Dean Morgan in this type of role, but ultimately he succeeds in coming across as creepy, pervy and just a perfect downright stalker character. The movie provides the same amount of thriller moments as you would get from a film like Fatal Attraction.