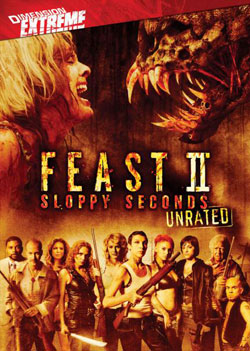 The chills continue in this gruesome sequel to director John Gulager’s 2005 horror extravaganza as the survivors of the besieged tavern flee to the nearest town. But the vicious creatures track the blood trail, and the motley group of barflies must join forces with the locals to end the carnage once and for all. Jenny Wade, Clu Gulager, Diane Goldner and Chelsea Richards head the cast of this comic bloodfest.

Even though we haven’t gone around to reviewing it yet, let’s face it …Feast #1 kicked ass! A perfect monster movie all around. Now hot on its trails we have the sequel “Feast 2 sloppy seconds”, which by the time of me writing this is already becoming its own franchise. Word posted that Feast 3 is soon to be out.

Helmed again by Director John Gulager we are knee deep in the sh*t from the get go. The monsters are loose and tearing up everything in there path. We are joined this time by a handful of new characters. Our first up “Biker Girl” “the leader of the biker chick gang “Bleeders” With gun toting high energy she’s on a revenge streak to find the assailant of her deceased gang member. As we are introduced to the the small town, the massacre taking place and the surviving residents iwe are engaged with style and finesse that Tony Scott and Tarantino would be proud of. Using a combo of film looks, chop cuts and retro campiness we are given an overview done in tune with other popular high energy releases. The creatures are seen with quick cuts mixed in with the bloodshed that lay in there wake.

As a film, this one literally runs the gamut of plus and minuses. I think its only fair to point our each of them as for me they make and break the film at the same time. Which is a weird combination, though I would guess this is point of love/hate relationship with viewers.

The pros:
– Killer camera work, very edgy, intelligent framing, gritty, modern and in line with the new style of cinematography
– Great editing! – In fact, better than most with more shots per minute than a MTV commercial
– Kick ass creatures! – these mothers are on screen for one thing to kill, kick ass and kill some more
– Very funny at times, whether subtle or intended, the 5 minute puke fest, disembowelment scenes have to be seen
– A great gorefest, of ripping, shredding, melting…you name it!

The cons:
– missing the dynamic flair of the original “Feast” acting team
– Watching a baby being thrown in the air, hit the ground, eaten and then shown in pieces – very bad taste! It may work in the Asian horror market but for US viewers this essentially is a taboo that should be left out.
– Ending is poor, in fact there really wasn’t an ending
– Camera work though cool, at times is exhausting to view, with so much movement. Some times very hard capture the essence of the scene (again a love/hate relationship)
– The “Biker chick” while hardcore, tough and cold, …I felt might have been better suited with a more dynamic “name” actor who could bring some emotion to the role.
– Actors while doing a fine job, was mostly an ensemble without much standing out in the way of presence. The midget team stole the show.

As mentioned previously, I was a fan of the Feast gang from the first 5 minutes, this latest release though lacking the experience acting talent that added flair to the original is still a nice follow up for horror fans. In some ways it reminded me of the Planet Terror from Grind house energetic chaos. This round we get to see the monsters in all there glory. There really isn’t much story here, though I’m guessing it was intended that way. The creatures run amok and kill for the fun of it. The survivors find there way together though no-one ever leaves. I think the true intention of this film was to appeal to a more select market who thrives on violence, fast moving energy and some dark humor. In line with other works I’ve seen from Dimension Extreme, this notion is becoming part of the film lines style.

The pukefest is so over the top, it is downright right hilarious! Grandma melts and gets chucked into a building just before loosing a few limbs and other parts we argent sure of. Add to that a few more occasions that I found pretty hilarious and those are worth the viewing alone.

While it did take me a bit longer to finally give it a viewing, it surely was worth the wait. It looks like Gulager will be helming the newest “Feast 3: Happy finish” as well. Coming off of “Pulse 2” After life, he has certainly kept busy. I for one will be looking forward #3 and the his work to follow. Feast 2 hits you in the face with a sledge hammer and keeps running! It’s geared towards a certain audience. It also is hard to classify as its drama, horror, comedy, action, retro. modern, and apocalyptic all rolled in one. Check it out for yourself and see what you think!