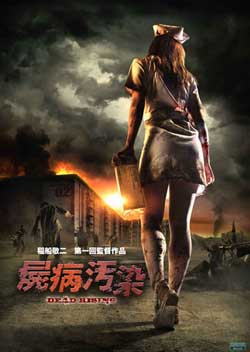 A bit of a disclaimer here, I love the Dead Rising video games, especially Dead Rising 2. Killing zombies has never really been more fun. So I was anxious to see how this film was going to turn out, coming from Capcom and all. Pretty darn good, actually. Blood and gore in good amounts, a terrific bad guy and plenty of the living dead. Sure it’s one of those quickly made to capitalize on the video game kind of movies with a limited budget and plenty of inside references to Dead Rising 2, but it works here.

And what better way to start our movie than with a zombie attack? A young guy in a black hoodie stumbles across a playground filled with kids and moms. Head down, he keeps continuing into the street where he is promptly hit by a car. Horrified onlookers gather as the driver approaches the young guy to see if he is okay. Bad move. Our young guy promptly rises and takes a nice chunk out of our motorist.

Cut to an apartment where we find one of our heroes, George, who is wheelchair bound, playing Dead Rising 2 on an Xbox. His older brother Shin quickly comes in and explains they have to get out of there. Seems the whole city is under attack by zombies. He overheard some neighbors talking about a safe house where if they can get to it, they’ll be saved by the in-coming rescue mission. George is a little reluctant at first but trusts Shin to do the right thing.

Turns out that all of the safe houses are full as they get turned downed at three of them. It’s getting dark and they need some shelter fast, as zombies get more vicious at sundown. Shin finds a warehouse that seems perfect. Stocked with all kinds of boxes and barrels, they should have all of the supplies they need until they can figure out what to do next.

But this warehouse also happens to be the home of a small gang consisting of three guys and a girl. And they don’t appreciate George and Shin coming into their territory. Their leader is one bad mother complete with a maniacal laugh and over the top facial expressions. In short, he absolutely makes this movie, with some of his dialogue being way over the top. From here we start to fall into the usual zombie routine as they break into the warehouse and wreak havoc with our cast.

Keiji Inafune (producer of many a video game including, of course, Dead Rising) does a good job directing the mayhem. Given the budget restrictions, there is an ample amount of blood and gore. The acting is decent as well, with the aforementioned bad guy stealing every scene he’s in. What really makes this film work, though, is the relationship of George and Shin. Two brothers who would do anything for each other, and the film does an excellent job of showing this dynamic early and often.

Now if you’ve played Dead Rising 2, you’ll probably enjoy this film more due to the numerous references to situations, weapons, the drug Zombrex and, not to give too much away, certain rooms. It was kinda cool to see how the writer and director worked everything in. Our kills, though not necessarily varied, are more than sufficient. Make-up is good as well, again considering the budget, with our zombies having glowing red eyes and appropriately rotting flesh.

I would recommend seeing this movie if you can catch it, especially if you’ve played Dead Rising 2. The overdub on the voices isn’t all that bad as the film is from Japan, and in no way detracts from the viewing experience. Sure you have your cheesy moments here and there but by the end of the movie you’ll have enjoyed it for what it was meant to be, a quick distraction from everyday life.