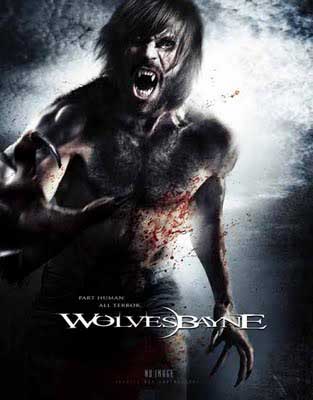 After Realtor Russell Bayne is bitten by a werewolf, he finds himself thrust into the supernatural underworld. He becomes the target of an evil vampire clan – led by head vampire Von Griem – when they discover Russell knows the whereabouts of one of the ancient amulets needed to revive their long lost vampire queen, Lilith. With only a fellow werewolf Alex Layton willing to train him, the naive Russell joins up with Jacob Van Helsing and his vampire hunting team in order to stop Von Griem from resurrecting Lilith and bringing darkness onto the world threatening mankind with extinction.

Wolvesbayne opens with an extended prologue describing events that happened over 130 years ago. Not only does it set up the story but it also introduces the tone and execution of the entire film. It is confusing, sloppy and full of characters difficult to recognize or relate to. Even with its relatively small cast, neither the script nor the cinematography help in distinguishing different characters, locations or supernatural beings. You know you’re in trouble when you have trouble recognizing who is a werewolf and who is a vampire. The characters blend together so quickly, you forget who’s on who’s side, which is a vampire, which is a werewolf and if the character is new or you’ve seen them already. No one is properly introduced or behave consistently.

In one particular example, there are three separate action sequences on display simultaneously: Russell being cornered by a vampire clan; another vampire clan attacking Von Griem; and Von Griem’s vampire sweetheart attacking another vampire who may have one of the amulets. Which vampire is which and fighting for which cause is hard to follow. Even with each scene having its own locale, it is still confusing which group is on screen at any given time – each location has very little background or establishing props and is lit with the same lighting obscuring the characters faces and details. It eventually all comes out in the wash, but getting there is rough.

The cast of heroes suffers the worse. Jeremy London, most famous for his supporting role in Party of Five (1995 – 2000) or perhaps his recent stint on Celebrity Rehab with Dr. Drew, stars as the protagonist Russell Bayne and he is dreadful – never good enough to bring any weight or sympathy to the character and never cheesy enough to bring any fun to the role. There’s a scene where he’s walking down the street feeling the effects of lycanthropy for the first time, hearing sounds and sensing smells from a distance. He stumbles across a crosswalk with his hands to his head and a blank stare on his mug – that’s pretty much how he wanders through the entire picture. Christy Romano costars as Alex Layton a more experienced werewolf who tutors Russell to the ways of the wolf. She fares better than London, but that’s not saying much. At least she shows some range. Rhett Giles rounds out the main goods guys in Wolvesbayne as Jacob Van Helsing and plays it all action hero. While a bit one-note and wooden, the performance serves the role.

Mark Dacascos (Brotherhood of the Wolf, Iron Chef, The Crow:Stairway To Heaven) heads up the bad guy cast as Von Griem. The role starts out very drab and dull but ends up being the highlight performance of the film. Once the character become more active in the script, he shines past his lackluster makeup effects and wardrobe. Thankfully he gets the opportunity to show his chops as a Martial Artist and at handling a sword in some of the sparse choreographed action scenes. At his side is Yancy Butler (Witchblade, Kick-Ass) who plays the evil Lilith. More than anyone else, she chews up the scenery and overplays the character. It’s goofy, but fun to watch, even if she makes some of the strangest facial expressions ever seen. One of the best scenes in the movie is when she and Dacascos trade villainous dialog over who rules the clan and who makes the decisions. Dacascos may be the big bad vampire; but, after encountering Butler’s Lilith, he’s nothing but a whipped dog. 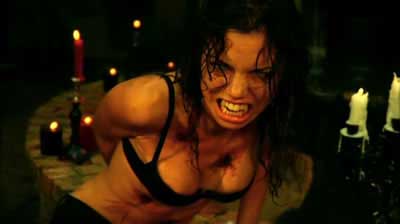 Wolvesbayne offers very little to recommend. The special effects are underwhelming and inadequate. The vampire make-up is the standard teeth and contact variety and most of the time the werewolves are only partial changed, again teeth and contacts. A full-body werewolf is only viewed a couple of times throughout the picture and only briefly at that. Its impressive enough, but is on and off so quickly that it’s silly. The kills are TV of the week variety with gashes, dripping blood and vanquished vampires going up in smoke and flash. The movie is full of ideas, in both the script and the direction, but never executes them with style, only occasionally capitalizing on an action sequence or half-baked idea. The script written by Leigh Scott (Dracula’s Curse, Invasion of the Pod People) is full of weak dialogue, underdeveloped characters and unoriginal ideas. Griff Furst (Swamp Shark) directs the movie as if he’s hiding the inadequacies of the budget, cinematography and locations – everything is blurred by darkness and poor editing. He sneaks in a few interesting techniques here and there but they rarely make any sense and are more distracting than beneficial. Wolvesbayne is a low-budget z-grade movie that’s embarrassed to embrace what it is and winds up becoming a boring snooze-fest to be quickly forgotten.