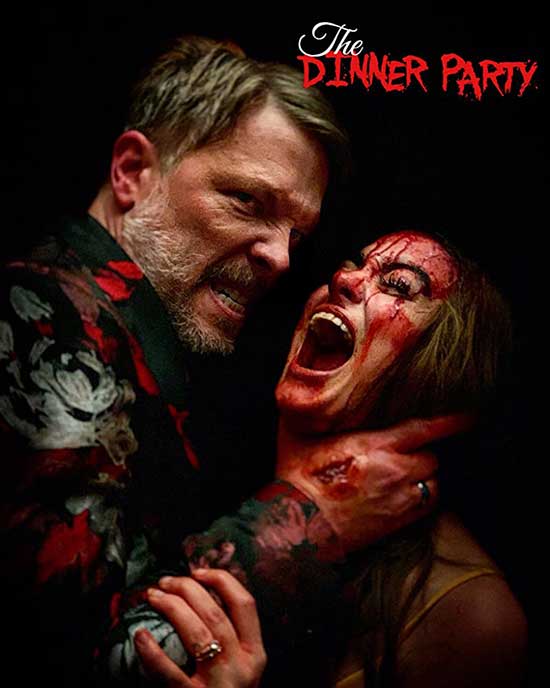 “A budding playwright and his wife attend a dinner party hosted by wealthy, cultural elites, who have promised to bankroll the writer’s latest play to Broadway, but, in fact, have darker designs in mind for the couple.”

Miles Doleac’s new film, The Dinner Party is stunning visually. The music fits beautifully around the film. It intertwines in the scenes perfectly. If you follow Miles on Instagram, he has been reading Shakespeare with so much heart.  I’ve been waiting for this movie. A ravenous fierce film in such a calm setting. Bill Sage playing Carmine and Sawandi Wilson playing Sebastian. These two are preparing for the dinner party. Carmine is chopping and all of the sudden the doorbell rings and Haley (Alli Hart) and Jeff (Mike Mayhall) show up. A nice sweet couple.

Sawandi Wilson and Bill Sage are incredible in these roles. This movie reminds you of going to dinner before going to the theatre. Sebastian messes with Haley and Jeff and advises them to “forgive his tomfoolery.” (I almost melted on the floor.) Another movie that confiscates phones, that is a big red flag. (Go back! Don’t GO IN THE HOUSE) Jeff gives Haley a lecture on fancy dinner parties. Jeff has a play he wants to get on Broadway.

(He might end as dessert.) We meet Sadie (Lindsay Anne Williams) and Vincent played by Miles Doleac. He is calmly carving what seems to be another dinner party notch into his arm. Haley has a weird feeling and wants to go. Jeff is more concerned about his play. Jeff has a chess piece he whips out and he’s dismissive of Haley.

Sadie brings them wine. Lindsay Anne Williams also appeared in The Hollow and Hallowed Ground. Doleac wrote and directed The Hollow and Hallowed Ground. They are both great films, if you haven’t seen them. Doleac’s ability to disappear into a role makes him fascinating. You can see Doleac in Lovecraft Country. Haley and Jeff meet Vincent. A charming aristocratic gentleman. Sadie joins this artistic conversation.

The art, the setups, the acting. This film keeps your attention. The house in the movie is beautiful. Haley goes to use the restroom and there is a fish in the sink… Is it real? She is having flashbacks to her childhood. Haley meets Agatha (Kamille McCuin). Agatha is a writer. Part of the conversation during the dinner party includes the lack of phones and how people don’t communicate.

It is fascinating they discuss this and here we are in a pandemic. We find out the chess piece that Jeff is carrying is his good luck charm. Bill Sage (We Are What We Are, Hap and Leonard) plays Carmine with grace and ease. Sawandi Wilson and Kamille McCuin are so good in these roles. They pick tarot cards to pick who chooses the music. They begin to have a nice conversation about opera. Giacomo Puccini and Rigoletto by Giuseppe Verdi, Bluebeard’s Castle by Bela Bartok, that one is Carmine’s favorite. Bill Sage delivers an exquisite disturbing description of the opera. Haley looks like she wants to get up and make a run for it, listening to them. Carmine wants to know what is wrong. Jeff keeps trying to silence her, which is annoying. Haley just says it.

Alli Hart delivers this intense news about her stepfather (Jeremy London) and her mother. Carmine’s cannibalistic story he delivers to maybe make Haley feel better? Jeff is not likeable. Mike Mayhall plays this role well. His character is bossy, overwhelming and arrogant. This is one hell of a dinner party. The Dinner Party is stylish, clever, and smart.

Jeff is coughing and now they are describing another opera and Sebastian gets up and puts gloves on. Welp here it comes…. Dinner time…. Jeff is served or about to be served. Bill Sage has a meat clever. You can imagine. You root for Haley but you also find this group of people fascinating. Doleac’s characters are always fascinating and each one of these people have wild backstories. There is a catch and Haley must watch quite a scene involving her hubby.

Haley must listen to each person before they “do away with her.” It is Sadie’s turn. This movie is twisted and perverse but in all the right ways. It’s Carmine’s turn. He is like the Gordon Ramsay of cannibals. There is a cute moment when he tells Haley not to tell anyone about his “secret ingredient.” These people are evil or villains or bad people but they don’t see it. These people think they are living every day, normal lives. It’s divinely demented like watching an opera if it was a film.

Hostel and The Texas Chainsaw Massacre come to mind but The Dinner Party would be the elegant refined version. Leatherface doesn’t seem to need a fine wine. Haley escapes and there just happens to be ONE COP! (why is there only ever ONE COP???) He doesn’t seem helpful. (He isn’t helpful at all.)

Haley has had enough. There is a twist (WHAT A TWIST) and what a wild ride this movie is. Make sure to check out The Dinner Party.