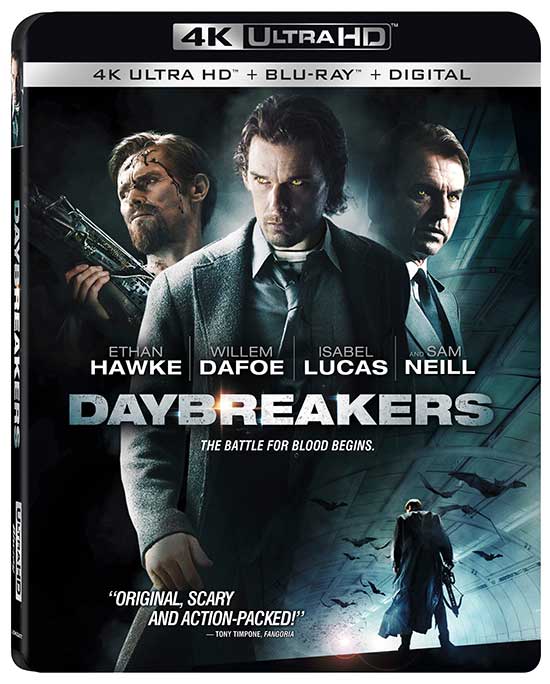 After an outbreak of vampirism has washed over the planet and its inhabitants have been infected for nearly ten years, supplies of human blood have diminished while demand remains steady. Few humans remain in the wild, having been rounded up by the military for use in blood supply and breeding, and the large holding facilities, where they are stored unconscious like honey in the cells of honeycombs, are not producing blood in quantities matching public consumption.

Dr. Edward Dalton, a vampire hematologist who struggles to retain his humanity, is tasked by his employer, the Bromley Marks corporation, to finish production of a desperately needed blood substitute. While working on his research and rushing into the trial phase against his own better judgment, Dalton comes into contact with a small group of surviving humans and realizes that a simple blood substitute will neither cure vampirism nor eliminate the need for farming human beings and that another route must be taken.

For the past few years, vampires in film and fiction have seen a revival of sorts. No longer monsters, these new bloodsuckers have been shaped into romantic heroes, people to be envious of and lustful over. Whole shelves of Young Adult and Paranormal Romance fiction are now devoted to “sexy vampires,” and for some franchises all manner of merchandise has their own vampiric variety. A brief survey of any mall book or media store will reveal clothes, candies and even perfumes stamped with the brooding heroes or signature logos of one series or another. 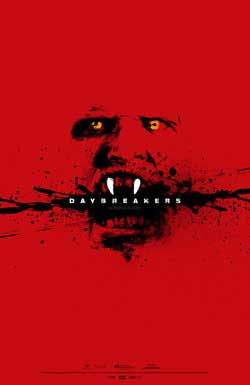 Daybreakers takes the “What if the whole world went vampiric?” concept and runs wild with it. People still work their usual jobs, though now at night. Office drones order coffee while waiting for the subway with blood swirling in their mugs like heavy cream. Youthful vampires, forever high school age, congregate along sidewalks and in front of homes like luminescent-eyed hooligans. Even the police are portrayed as business-as-usual in the film, cracking down on the homeless, people who have been unable to locate sufficient sources of blood or pay the outrageous prices for Bromley Marks’ product, their starvation transforming them into savage, chiroptean nightmares that plague the good people who’ve been fortunate enough to keep themselves fed. In a way, nothing has really changed; in another, the whole world is vastly different. Tunnels resembling skywalks are now built to shield citizens from the sun as they travel by foot during the day, and cars are outfitted with UV shielding and specialized cameras for daytime driving. 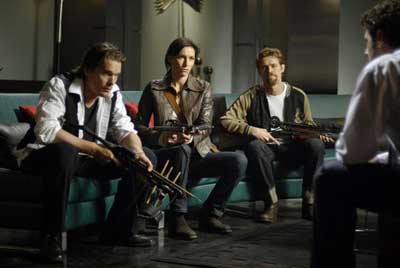 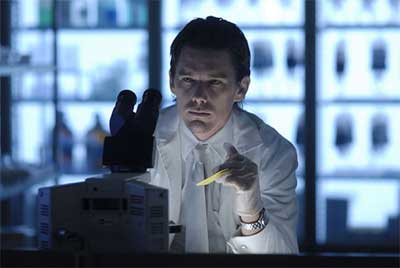 Not everyone is happy with their never ending vampiric lives, however. Ethan Hawke is amazingly convincing as Edward Dalton, a vampire who never wanted to turn in the first place. He drinks from animals and works on a blood substitute in the hope that humans, whose cold and horrific farming he must witness daily, may one day repopulate and live freely. It’s refreshing to see a vampire character who doesn’t overplay the “woe is me” angle or struggle to retain his humanity against darker urges; Dalton simply is himself, a man who appears human aside from his eyes and teeth and does his job to the best of his abilities. 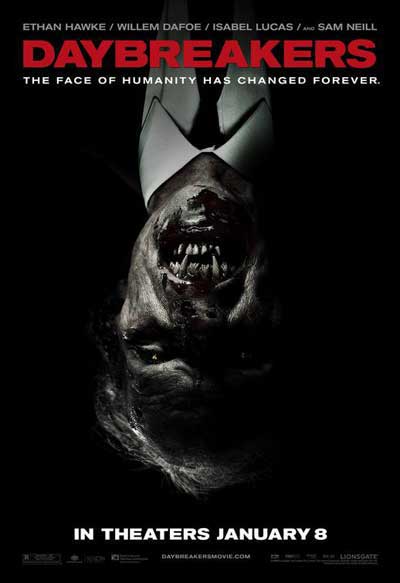 Sam Neill does a great job of portraying a character that fans of both horror and mainstream films alike will already be familiar with. While not by any stretch of the imagination original, his “profits before ethics” executive will both infuriate and entertain audiences. He pulls off the smug, hypocritical fat cat without going over the top, a greedy vampire who’s forgotten his human life because in it he never would have become so hugely successful. 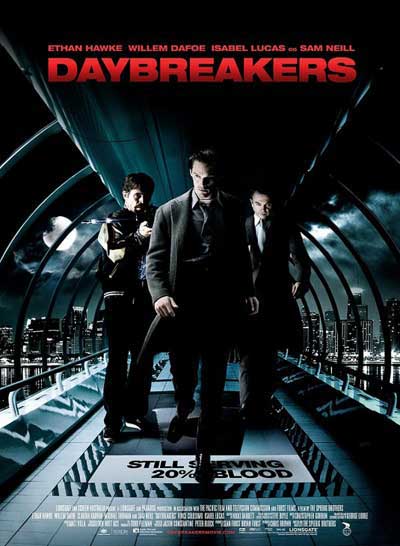 In addition to its portrayal of daily life, what separates Daybreakers from other vampire action films is its sly social commentary. There are two kinds of vampires in this world, the bloodsucking equivalents to the Haves and the Have Nots. The Haves, with their jobs and tricked-out cars, are panicking over their rapidly declining food source, while the Have Nots have degraded into sewer-dwellers who break into homes and attack citizens to survive as they find their bodies and brains quickly deteriorating. In an economic climate where many people now find themselves only one or two small paychecks from losing it all, this comparison is extremely hard to ignore. It is also very effective, illustrating just how easy it is both in Daybreakers’ fictional world and our own world of tenuous employment for an everyday citizen to lose everything.

The film has a very unromantic, blue-saturated urban feel to it, reminiscent of Dark City and the first Matrix film. Life isn’t all sunshine, roses and kittens, and there are no brooding vampires waiting to fall in love with unsuspecting humans here. It’s cold, a world turned on its side by a single source of infection, and the citizens left in it are eating themselves to death. Despite its many bleak, unsettling qualities, Daybreakers is a welcome respite from the current trend of over the top, oversexed and under plotted vampire tales we’ve been offered as of late.