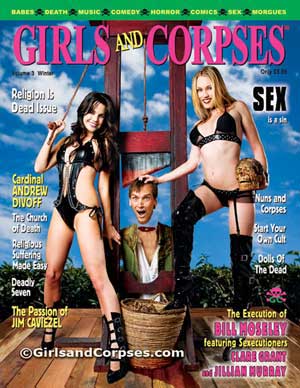 Great to see yours and mine favorite on screen psycho has a great sense of humor. Girls and Corpses magazine is in the house in its usual titty popping vivid color edition complete with loads of debauchery and insane subject content. Right off the bat the interview with Jim Caviezel is pretty hilarious. Not so much intended that way but just the range of questions that he tries to dismiss is inspiring to say the least. It’s like Satan himself flew down for a nice Q & A from the former extremely whipped to death Jesus. Question? I bet they didn’t intend a highly religious Christian movie to make the most goriest lists this year? haha……. something for everyone in that one.

Moving right along we get main photo shoots – the first as mentioned in Bill Moseley with sexcutioners Clare Grant and Jillian Murray. There almost a Ginger and Mary anne…. Gillian attraction to this shoot…or maybe that’s just me.

Now before you can say holy mind crap, flip open that inside poster spread! A cartoon …however, pretty blow-my-mind-with-doodle-shock! I had to turn he page real quick and let my sense simmer after that one.

Cardinal sin! – oh wait, I almost forgot…theres a religious theme to this issue. Andrew Divoff is all happy to oblige with a photo shoot featuring model Jacqui Holland. Man what hottie planet did she emerge from???….never have nuns look so milfy. Andrew is good sport sporting a rather pedophile looking grin…or was it sh*t eating? Though I’m not sure blond is his color. Hey anything Wishmaster-esque is fine by me.

The band Deadly Seven is featured. I confess to never hearing of them until now….but, man what a can of freeky sex rockin femme fatales. I’m not sure which fantasy suits me best. Though I’m sure these aren’t the ones to bring to Sunday brunch with the folks. Worth checking out…even if there music sucks or not. (Note: pick up Deadly Seven CD for final analysis)

Artist Karl Persson gets an art spread feature. And well deserved. This man’s work is inspiring haunting and surreal all rolled into one. In fact, I’ve got to put him our list to feature on HNews. Love the freeky mouth paintings!

Nun of That is a nice article by former Hnews freak magnet David Tamarin. Nuns and horror….. such a combo of right and wrong. If any of you have ever spent time in Catholic school….this kind of stuff is for you. Nun of that…. by the way is new film due out…in case I failed to mention.

Speaking of which, the feature “Dolls of the Dead” showcases the deadly doll sculptures of Miss Christy Lou, another newcomer to the Horrornews.net team….man my staff get around!

As usual there’s plenty of brilliantly photographed death pictures within….well more specifically images of bones and corpses. Church of the Dead is one such article which has some really cool photographs of propped up skeletons.

Execution Day is a great piece of eye opening. Steve Champion discusses why it ‘s a grim day when somebody is due for execution. Honest and informative the only thing that I see positive out of the experience is a last good meal. Then its back to business as usual. …waiting.

How to start a religious cult is everything you weak minded humans have been wanting for. If that’s too much to take on they also include notes on becoming a follower. I’m holding out for one that promises good eats, alot of TV time and nightly milfings!

PS- Word is our very own Dai might be appearing in G&C real soon, so all you internet jpg downloaders and stalker newbies get your checks ready for that 1……. hmm, I just thought of a concept…. “A cold DAI in hell” – now that would be worth the admission! C-ya