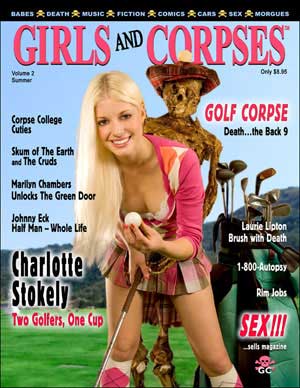 Girls and Corpses magazine never seems to have a shortage on a collection of great content. Perhaps the oddest collection of content assembled in one magazine, but that what makes it so damn interesting.

This issue we have a an exclusive interview with p*rn star great Marilyn Chambers who gives a great overview of here career up to now. Who remembers :”Behind the Green Door”? – Well it may be before you time but its definitely worth a viewing.

As usual we have a variety of funny, clever and cool cartoons throughout. Always clever, crazy and eye popping. Most of them are one off illustrations, with a occasional gag spot such as “Highlights for Corpses”.

Laurie Lipton is featured in this issue who’s artwork is nothing short of amazing and obsessively detailed to the point of scratching your head with a clever on the issues of spending way too much time with a pencil. Gothic, macabre and inspiring!

Scum of the Earth – one of the greatest bands on earth gives a nice nice insert of there craziness. If the name alludes you, then if you are a Rob zombie fan, this band is for you. Close your eyes and you’ll never know the difference. Also we spend time with the band “Crud” who I’ve never heard of but sure will give a look into now. They seem to combine a circus show with the intensity of the “The Genitorturerors”

G&C has included there special insert areas of interest such as “Prison letter of the month”, reviews, “Celebrity death polls” and more!

The Amazing Eck!?? And I thought my life was hard, take a look at boy wonder who lumps around with no lower torso! An interesting article and a nice few pages of Eck scribble drawings …mostly with odd creature sporting big penises…yike’s!

Golf Corpses anyone? Yes, a full cover layout and spreads featuring model Charlotte Stokely and her corpse of choice! She does give a quick interview but hey who has time to read…ha ha. anyway’s you’ll find yourself wishing you were a corpse for just this reason alone.

Ever hear about a web site autopsy service? – Well you will now. A nice overview of the business , what they do and how they do it. Hey someone has to right? Good thing G&C care enough to spread the word and educate its readers.

Picnic with corpses, Cassie and Maile Moore seem to have way to much fun in there outing with there favorite corpse finishing it off with a bedroom photo session. Lucky for us they wore there best undies and nightties….wait did I say there is more to look at in this issue? Maybe later as this section deserves a closer inspection

Great fun and macabre- get it now!