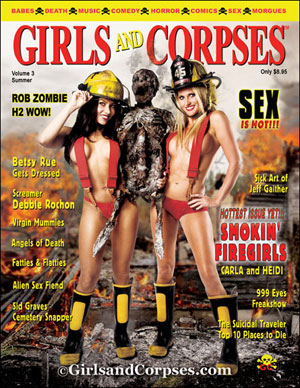 So what’s hotter than a towering inferno?, how bout 2 fire babes hot and sweaty! Now before you can say turn and flip, check out that back cover, and we mean stunning on the “back end”….. Yes it’s that time of year when jobs still remain a things of the past, governments keep giving money to everyone but us and a new issue of Girls and Corpses is forged from the fiery pits of all that is unholy and filled with lust. Your guide on this tour and every other other Robert Rhine. Robert is giver to the people, so when all is lost, the bills stack up you can still count on him to bring you hot babes, seething content and friend who’s after your own heart.

So what do we have here?

Well we know and love him, its yet another interview with Rob Zombie. I’m sure Author now he’s sick to death of interviewing, but we horror fans have a need to know nature and Rob is taking on Halloween 2…..so weez gotta have de fax! The details go into the film, his thoughts and what his plans are for now an din the future. As it details his thoughts we learn that the first film really didn’t go his way, so this round I’m guessing we get to see the real Rob zombie version. Well the hype is there so read on and get all you can early cause the film is just around the corner.

A Girls and Corpses mag wouldn’t be complete without some feature on death or dead things. In our latest visit we check out the “Virgin Mummies of Palernmo Italy”. Pardon me is I’m not turned on in their current state but it is an unique tourist attraction and something I’d like to see someday. The dead bodies stand erect in amish style clothing waiting to greet passerAuthor. The magazine details the visit.

Sid Graves seduces us with his graveyard photography. A nice interview and nice set of shots. Most intriguing is some of the locations that still exist with this detail grave work. Sid spends his time finding these locations just in case we want to reconsider an upgraded “styling” cemetery to find our final resting place in.

Betsy Rue from the recent film Bloody Valentine 3D is interviewed. What I found hilarious about this piece was that it mainly just stormed her with questions about her nudity in the film. In fact it notes that she has the record for longest nude scene in horror! Ok, well I guess we wont include all the horror p*rners out there…but ya that’s kind of a cool “famous-for” thing to have. Hey she likes being nude, no harm there…and she’s willing to talk about it for 3 pages…more power to ya!

Hey now! – “Fire down Below”…ya I believe a UFO song is in order. Carla and Heidi show us how to really work the fireworks. Much better experience than seeing a bunch of sweaty older fire dudes swinging hose. Now I’d like to put money on the fact that there cover spread poster will adorns quite the many of fire stations around the country. Robert aims to please.

“Alien Sex Fiend” gets a feature and now I’m on a mission to acquire and engulf. Nixon Suicide goes over her rather unusual sex horror film that had her doing all kinds of naughty things with squids and tentacles. I think we may be on to something here! A whole new underground movement in aquatic horror p*rn….high five!

2 headed lesbianism corpse double date……….. I’m assuming this is photoshopped…however, what if? I’m sure the bro’s can picture some pretty interesting one of a kinds from this combo. hmmmm…………

Debbie Rochon is profiled and interviewed. I do have to say the girl gets around on the movie sets. With article meant in a humorous presentation we get a quickie with Debbie and some hot cougar shots to boot!

“999 freak eyes show” – Where do you find these people? A tribute of sorts to the old sideshow freaks, the article is even more funnier as they explain some advantages to being a freak and who it relates to the ladies. Looks like alot of fun…i’d check it out myself if I lived closer. Good to see that american hasn’t lost its sense of humor.

Jeff Gaither is profiled with a great 6 pages of artwork. Though i’ll confess I don’t bother to read the interviews on artists as much as just taking in the cool graphics ….sweet!

Ok well that wraps up my coverage on this one. Still don’t forget to check out the cool gory cartoons, a few more smaller articles on death, fat chicks and cool locations to attend. Oh and don’t forget a nice article of suicide and bets places to commit one. Always the helper, they are.

Girls and Corpses – buy it, try it, and die for it – on your local news stands that endorse necrophilia.
(which means I think you have to order it online ;)