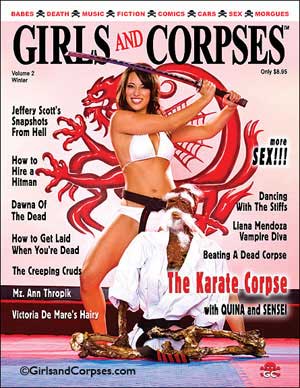 Well this wraps up the last of the batch of Girls and Corpses reads I have on hand. Though I still look forward to many more new issues to dive into. First a kudu’s to the editor who not only is able to fill the pages with interesting stuff but to keep it disturbingly diversified. I will say hands down that the content is really one of kind for the magazine market. My review here should further that statement. So let’s get right into it.

How about an article purely based on sh*t. No, the real thing ….models who sh*ts, reports of foul sh*t sessions and a variety of sh*tty products. Not meant to be a pun, but the real deal. A sh*t strainer that forms excrement into designs….are you kidding me? How bout some classic food combos to equate to the best worst smelling farts. Or a ode to humanity and why we should embrace our stink…or not. Though the funniest happens to fall in the introduction that monologues the vicious descriptions of celebrity tube snakes making there way into waters beneath …great stuff.

“Snapshots from Hell” takes a look at the art of Jeffrey Scott who uses a blend of models, horror and some classic flair thrown in for good measure.

My most intrigued read comes in the form of “Love thy Neighbor” which I couldn’t exactly figure out if it was real or a gag. It was presented as real so that’s what I’m going with. The article profiles a company who takes orders on hits for $50K and up . Apparently they operate over the internet as a service for anyone who wants to hire to have someone killed off. While the details are very secretive and expensive, they claim to have taken alot of hits for hire. The occupation which sounds like something more out of a movie script, provides a clean and efficient kill promised to those who can afford it. There book contract killing for dummies is even more of surprise. In fact you can go to there web site HERE and read all about it. While the interview is told pretty effectively, I would imagine that the idea of it would be heavily investigated by authorities to lead me to believe that its some sort of gag……… but whatever, you never know right? well I took a step further and found that there disclaimer says its a parady..so there ya go.

Hey let’s not forget that the issue contains lots of buxom babes ready to lay it down corpse style. Inside features include: Liana Mendoza in a sexy 4 page spread. and Quina Feldstein who shows us how to really lay it down on the dojo mat.

Though my interest was really peaked when the “Dawna of the Dead” article rose from the dead. Described as a hardcore horror and sex film I’m hoping it exceeds the usual brand of horror p*rn offerings. The interview gives us the line on the use of alot of blood and trying to make it all work for the camera. What will they think of next!

Victoria De Mare gives a rather sexy but comedic interview and a nice butt shot to chew on. One of our Horrornews.net vamps who seems to be riding the scream queen wagon into the horror genre market.

Museum of Death looks like my kind of tourist stop. Why don’t they have any of these stops near me? It sounds like they have quite a few serial killer souvenirs laying around. Perfect for the “our family scrapbook” pages. What else? Dollies of Death, horror cartoons and an Australian punk gothic singer who likes to pose with squids on her head. Mz Ann Thropik talks about her band, music and squid fashion……… it doesn’t get any better than that.

Oh wait, it does….our Horrornews.net writer Necromagickal has provided a full expose on Necrophilia in horror cinema. some info that no scholar should be without…. dare I ask what he does in his spare time…

that’s it folks…….. perfect for the sh*tter and boring car rides to Grammy’s house.