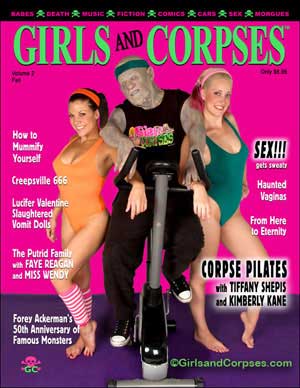 Rhine really knows how to win the hearts of the genre. Hot chicks combined with dead people. I guess it brings out the necrophilia in all of us, though I’m leaning heavily on the hot chicks side rather than crusty flesh.

Speaking of, this issue features the lovely Tiffany Shepis and Kimberly Lane smoking up the newsstands. So while we are on that subject let’s just jump right into their photo shoot called Corpse Pilate’s, how cool is that! Though even with a dead corpse in the shots your eyes are simply drawn to the beauties in some pretty well articulated shots. The 4th of the feature has to take the award though as we get a “great shot of Tiffany’s assets in a pose that will have fans stuck to the page for months.

Oh wait, I almost forgot……..there’s more in the magazine as well. Then again I’m having a hard time turning the page to something else.

Ok moving on, “A is for Ackerman” is as you guessed it a feature on the man himself. Not just a feature, but an actual interview. As you know this makes this a collectors edition with that alone. Great insight into the man, the myth and his legacy. Moving forward, there’s that Corpse Pilate’s again……..dang and I almost made it to another chapter.

Quickly what is a magazine without a lesson on how to mummify yourself? A bit of culture is featured here and some info to stuff you maybe out to know. Of course this is also good for keeping a loved one around a bit longer after they have exhausted themselves of this world.

Creepsville 666 covers the band of the same name who gives us the lowdown on there new CD release “We will Rise”. “The outer limits of Horror Video Game”s covers the game “Dead Space”. I’m not a gamer myself but the graphics on this one are worth checking out. In fact I’d should become a gamer based on this alone. Further details discuss the Dead Space movie also coming out called “Dead space: Downfall”, a radical film that I’ve had the pleasure of already seeing.

Art comes in many forms, good thing G&C caught up with Ted Von Heiland and Jade Perez. Each has there own feature with compelling pieces that scream off the page. Myself I’m leaning towards the metalworks sculpture as the depth and detail are a sight to be seen. Perez offers some evil looking dolls but I’d still love to get a hold of Heilands metal works to hang in my room. Killer stuff! I never grow tired of dark art and of course Tiffany’s butt.

My life as a Mortician ….well what a crazy job that must be. Annie Forrester gives us more behind the scenes on her day to day routines. Hey its gotta beat sitting inside a cubicle all day right? I love to be educated even if its sewing up dead people.

Lets not forget Rhine’s frequent blend of horror cartoon mayhem that appears through out the issue. Both cartoons and fake ads provide plenty of fun entertainment that beats any ad you’ll find in People or Us magazine. “Beached Whale” especially will make you squirm a bit in disgust

Other sections include some coverage on the film “Beneath the surface, a nice photo spread of Dominique Croix, vintage Tv shows turned p*rn,a great article on the haunt “13th street Morgue”, and plenty more photo opportunities to drool over.

Last but not least we get an interview with Lucifer Valentine, one of the most controversial and sickening filmmakers ever to grace our planet. The interview is both revealing and depressing as we hear about turmoil in his life. They say life inspires art, well this is sure case for influencing the product. I can’t recommend them to anyone in there right mind but they are extreme. Special mention goes to interviewer Necromagickal who contributes weekly columns to our web site

Have fun till next issue!