I know what your thinking already.  What’s the joke?  How does a fake demonic doll drive the queen of day time to eat an obscene amount of Macaroni and Cheese?  Truth can be strange then fiction, that’s how.  Oprah said on Piers Morgan Tonight that when Beloved bombed, and Bride of Chucky out performed her she fell into such depression that she ate 30 pounds of Macaroni and Cheese.

Oprah was quoted as saying this; “I’m not in the movie business. I did this movie because I was passionate about it,” Winfrey explains. “I didn’t know that you had that weekend and that is it. So I am thinking that if people don’t go this weekend, that people will go see it next weekend.” 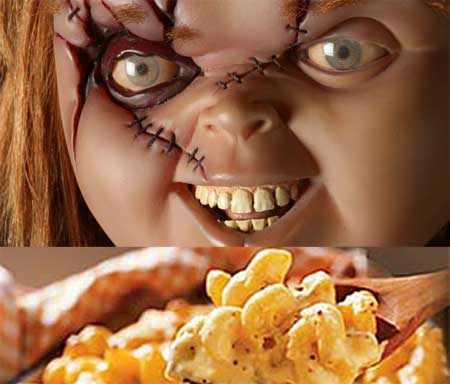 “It premiered on a Friday and I remember hearing on Saturday morning that we got beat by something called Chucky. I didn’t even know what Chucky was. I asked my chef at the time, Art Smith, to make some macaroni and cheese. I ate about 30 pounds worth,” she reveals. “I’m not kidding! It’s the only time in my life I was ever depressed. I recognized I was depressed because I’ve done enough shows [to know], ‘Oh, this is what those people must feel like.”

Looking at the box office results for each fim Bride of Chucky opened on 10/16/1998, earning over $11 million dollars, the same weekend that Beloved bombed with $8 million.   Bride of Chucky was able to double it’s budget while Beloved never came close to recovering it’s $80 million budget.

Never doubt the power of a popular horror movie.  It can bring down even the mighty