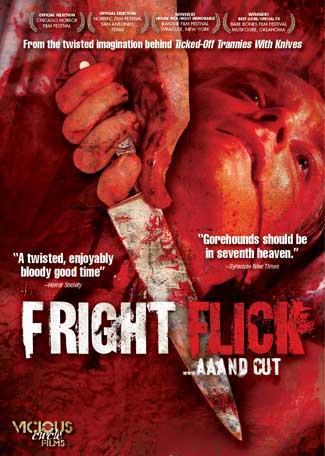 Breaking Glass Pictures has announced the January 25 DVD release of Israel Luna’s “Fright Flick.” The horror-comedy –which combines satire with over-the-top gore – arrives on the heels of Luna’s recent cult phenomenon “Ticked-Off Trannies with Knives” and will be released under Breaking Glass Pictures’ Vicious Circle Films label.
Luna shows audiences just how cut-throat show business can be in this bloody, outrageous horror-comedy that satirizes the filmmaking industry. When the air-headed leading lady of a B-grade fright flick turns up brutally murdered during the film shoot, the motley members of the cast and crew find themselves at the heart of a real-life whodunit — and with so many competing egos on set, everyone’s a suspect.

The film played at film festivals across the country and took home such accolades as Best Actress for Allyn Carrell at the Horrific Film Festival in San Antonio, Texas, House Pick at the B-Movie Film Festival in Syracuse, New York, and Best Gore/Special FX at the Bare Bones Film Festival in Muskogee, Oklahoma.
Special features on the DVD will include a blooper reel, a behind-the-scenes featurette, deleted scenes, and a photo gallery. 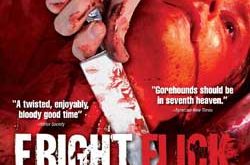