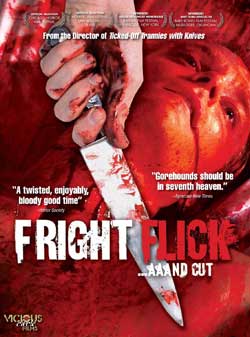 Director Isreal Luna weaves this hair-raising tale of a low-budget film crew being stalked by a vicious slasher. The director is a hack who’s obsessed with the lead actress, the producer is forced to swallow his pride instead of getting credit where credit is due, and the supporting actress is jealous that she didn’t land the lead.

A motley crue of pretentious Hollywood and low-budget filmmaking stereotypes come together for the filming of FRIGHT FLICK 3, the latest in a series of successful slasher flicks. But wait, mayhaps I’m getting ahead of myself…see, two years earlier, during the production of the original FRIGHT FLICK, after the completion of filming one day, someone decided they weren’t done playing psycho killer quite yet and decided to actually murder the film’s heroine. Back to present time during the filming of Part 3, life begins to imitate art once again as everyone starts dying off in mysterious fashions. Is it real? Is it live? Is it Memorex? Is it all part of the movie-within-a-movie? Is it too much to comprehend for just one horror/comedy? Nah, just sit back and enjoy the bloody good ride…

Israel Luna, you crazy bastage…first, I get saddled (and not too long ago, it seems) with reviewing your flick TICKED OFF TRANNIES WITH KNIVES, which to me was a hilarious and brutal homage to the 70s Grindhouse/exploitation flicks. Now, with FRIGHT FLICK, you tackle my absolute favorite period of filmmaking – the over the top 80s from FRIDAY THE 13TH straight through the 90s with some very SCREAM 3 aspects thrown in for good measure. Did you live up to my expectations? Well, yes and no; but definitely more yes than no. Congrats, good sir, and well played…

See, I love me a good horror/comedy, as my three loyal readers well know by now. Sometimes, the more ballsy and risk-taking, the better. Case in point – one of my Top Ten of the previous decade – the hilariously gory and musically-enhanced DEAD & BREAKFAST. But as my three loyal readers also know about me, I much prefer the layered storylines of British horror/comedy, where the comedy plays out as part of the story without overpowering it or getting in the way of things, much like one of my all-time favorite flicks, SHAUN OF THE DEAD. It’s a tough tightrope to walk, balancing everything out perfectly to make a funny and entertaining yet bloodily entertaining flick…some seem to do it effortlessly, while others make a clusterf*ck of epic proportions (ah, so we meet yet again, STAN HELSING….), while most of the ones fall somewhere in the middle; the in-between, if you will.

And that middle ground is where FRIGHT FLICK fell for me. Now that may seem to the untrained ear that I’m saying this flick is in the neighborhood of mediocre to just barely enjoyable…not so at all. The laughs are quick, broad, and come often, and in many ways this movie reminds me of another middle ground horror/comedy that I still love with all my cold, black heart and yet constantly get made fun of for loving it – CLUB DREAD. To me, FRIGHT FLICK is the CLUB DREAD of 2011 so far…that kind of broad comedy and seriously stressful and bloody killings.

Luna has done it again – he’s entertained me, shocked me, and made me laugh all in the same movie – for the second time since finding out who this young and talented filmmaker is. The cast of the film (the real one, plus the movie-within-the-movie) all seem to be having the time of their lives on this flick, and that says a lot to me right there. If they’re having fun, we as an audience can sit back and have fun right along with them. That’s exactly what I did, and I think you will too. It’s available everywhere now, so get out there and snag a copy now!! 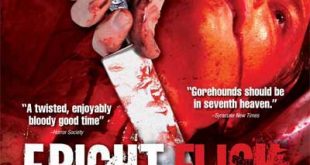