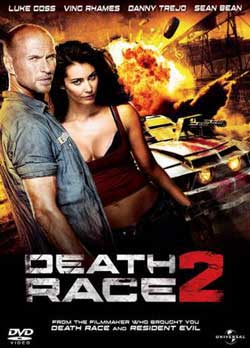 Death Race is a pretty cool franchise that presents itself as a true guys kind of action, crime film. The first one was of course balls out with Jason Statham taking the helm, though this round it looks like they have Luke Goss pulling the punches as Carl ‘Luke’ Lucas. The original title of this film was to be “Death Race: Frankenstein Lives”, but I suppose last minute decisions thought just #2 would be sufficient. It also features Danny Trejo as Goldberg who seems to be in about every film that comes out these days. Talk about hardworking, “Machete” is definitely keeping the food on the table these days. But onward we go.

The films begins with a botched bank robbery that has Carl “Luke” getting himself into a situation that ends up costing him most of this team. What was supposed to be a smooth run played out pretty poorly and got Carl arrested holding the bag. Markus Kane played by Sean Bean is the man calling all the shots and seems fine stepping back to let Carl take the rap. Though we get a sense that he is really a pretty shady character..

If you didn’t get the build up, this means that Carl and associates are going to be taken to the maximum security prison for some serious time.

The location is a high security prison called “Terminal Island”. The facility is being used to facilitate a TV program called “Death Match” which is actually a high stakes betting program and source of large revenues. Simply, each program showcases 2 prisoners who fight to the death in the courtyard which is equipped to release weapons at short intervals. The winner goes on living and the loser gets his head bashed in…more or less. Of course the show has a few repeat warriors and favorites that is further fueled by hottie September Jones (Lauren Cohan ), the host of the series. September is no sweetie who plots and connives just to keep ratings up and her position on the show. And where do you remember her from? Yep Bela Talbot from the Supernatural series that stayed busy by looking for ways to screw over the Winchester boys any way she could. It seems Lauren Cohan is perfect shoe-in for a cold hearted femme fatale who loves to back stab any way she can.

In any case, the powers that be have a plan to up the ratings. That is…. offering freedom and a new life to hardened criminals incarcerated who can win a game of “Death Race”. “Death Race” is the new version the game modified to include cars, weaponry and a female wingman. It’s a drive to the death and its all about win or die.

The film is much like the first one in the 3rd act which used some pretty clever editing and camera moves to ramp up the action. Inserts that look like video game influenced portions help to sell the tv show aspect. From here on in, it’s pretty standard stuff for those who like cars, hot women, prison drama and killing. I think this movie will fit a target audience nicely though it is missing a bit of the first film engagement between the beast “Frankenstein and Jason Statham’s pizzazz. A back story has the crime lord Markus Kane wanting Carl killed by sundown and the prison has their own agenda which is to make money.

Now the main objective of this film is really an origin film for Frankenstein and the Death Race, so you’ll have to let your retro notion slide into gear. Without giving away the whole scenario, let’s just say that Carl gets himself damaged in a bad way only to be re-instated as the future villain known as “Frankenstein”. And with Frankenstein comes a adverting campaign to get more viewers. I do enjoy a comic book like tale that builds up onto a character which in this case is a prisoner who gets screwed over and then sensationalized.

Even though the film might receive some reviewer “ho-hum” because its a sequel and its alot of the same stuff, I do like Luke Goss’s presence and acting. Danny Trejo is on board but stays more in the supporting position more than anything. The editing is top notch and deserves a kudus, along with what I was hearing as a pretty bad ass soundtrack. My first thought after watching was…when is it gonna be out? Death Race is action packed and delivers a stronge adrenalin rush in the 3rd act. If thats not your bag, then stick with something that doesnt focus on car racing.