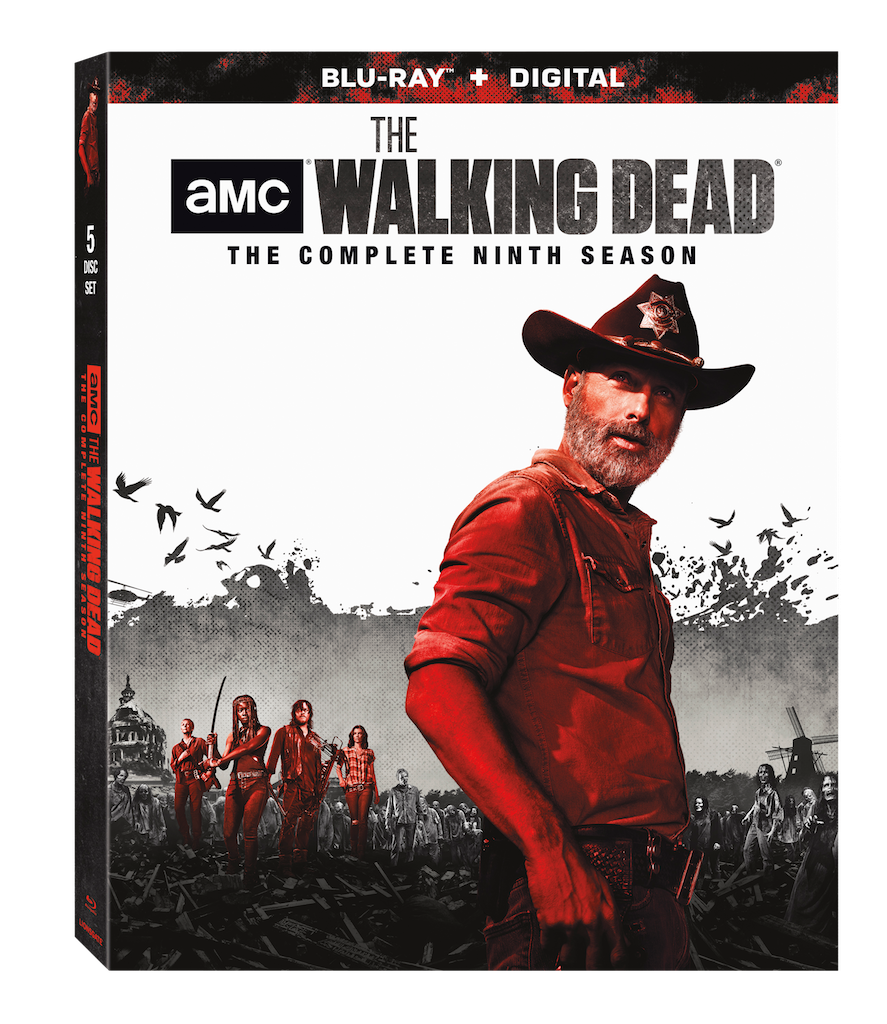 As sorts of changes are coming to the Walking Dead Universe. Yes, season 9 will be forever known as the game changer season, the season of change!

Horror fans hanging on every mention of this season were told in advance that it would be lead character Rick Grime’s (Andrew Lincoln) last season. Presented and revealed way in advance, it was clear that the AMC folks were not going to pull a fast on and just kill off his character in surprise. No Rick was there from the beginning, and has lasted thru all sorts of communities, renegades, locations and deaths. Losing almost everyone he has cared about, Rick has made the best of the worst while still managing to kindle a relationship with other leader character Michonne. 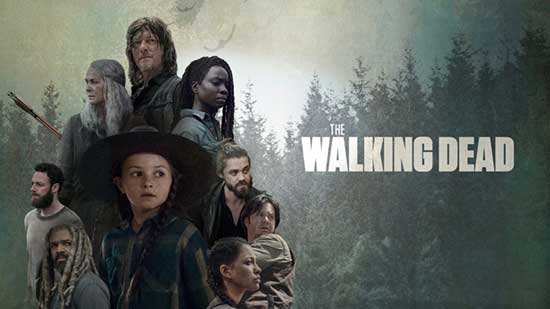 HNN has followed this series from the start faithfully anticipating change to occur at any moment and realizing that this is a franchise that likes to kill characters off, most of the time when least expected,

For those who are coming into WD thru season 9, well despite it being a damn good one, you may want to go back and learn from the past, as the present is in change for sure. The Walking Dead, described as a American post-apocalyptic horror television series, has been going strong thru 9 seasons. Based on he graphic comics same name it skips around and reinvents the storyline a bit to better fit within the intention of the TV show writers. Season 9 premiered October of 2018 and consist of 16 episodes.

Extremely dynamic, it is fair to say, we’ve lost a few, we’ve gained a few. As this is the world of The Walking Dead. I would say beware of spoilers, though from my perspective it appears the whole world is in on WD discussions, much in the same way as they might follow politics. So unless you have been stranded on an island, spoilers is a bit of a mute point.

Yes, alot happens this season. This season also marks the arrival of new antagonist Omega and her group of Whisperers. You have to hand it to the writers after subjecting us to token bad guys such as: the Governor and then Negan. It appeared at the time that Negan would be the top dog, the ultimate antagonist, of which he was for almost 2 seasons. But like any WD season, there has to be an adjusting of power and someone to come along and take the focus as the new arrival not to be messed with. 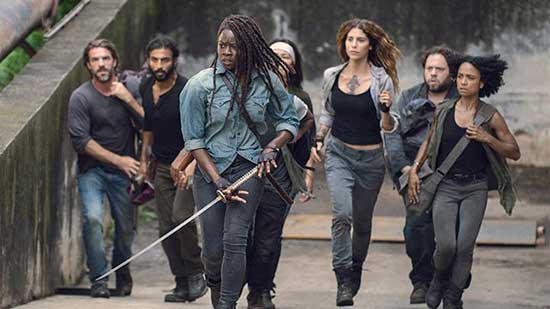 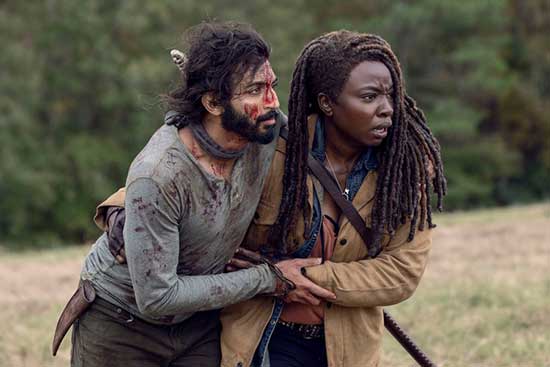 Season 9 contains 3 distinct story lines. The first being the exiting of Andrew Lincoln and the character of Rick Grimes. Up to this point Andrew has been unmatched in his lead-by-example persona and purpose. As the story writers detailed, Rick’s exiting allows other characters to flourish and open up. It presents a dynamic change for the additional characters to grow their own stories while we say goodbye to Rick’s. Alot has changed with Negan now being locked up and Rick providing influence in their sort of Mediaeval Amish sort of existence that the other have grown into. The prime characters have split among different locations so that each can flourish and grow in its own way. Speaking of, we open on the Hilltop location where Maggie is currently running the show.

After 1 too many attempts on her life, she makes the hard call to execute Gregory (who clearly has been a snake in the grass leading up to this moment). The event sets a precedent sending a message to the community that these kind of attacks won’t be tolerated. Laws are overdue to protect their existence.

Jesus, and Aaron confront a deadly graveyard filled with zombies. The foggy setting provides a perfect place to reenact the kind of zombie killings that horror fans have grown to love. Though tables are turned as whisperers co-mingling with zombies attack Jesus unexpectedly. This results in the death of character favorite, Jesus. This also signifies the level of threat from this clan.

The 2nd act of this series is set 6 years into the future signifying a growth in characters, their communities, and their general ways of life. Judith Grimes, now 6 years older, makes a memorable appearance as a Grime not to mess with. Her shooting skills are dead on, while her attitude appears to be at one with this alternate universe of the un living. Rick now gone, she resides under the care of Michonne, though also appearing to be more than worthy of handling herself. 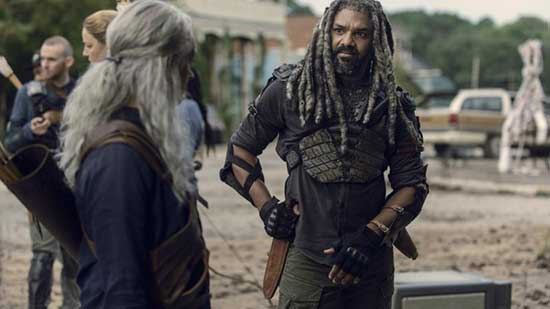 Eugene has grown and become empowered embracing the his reality while making significant contributions. Enid is coming of age, which gives her character more screen time to, a boyfriend, and a chance to further explore her personality and acting talents. Carol has grown her hair, now longer and gray as she spends time with her love interest Ezekiel. The 2 of them reside and govern the “Kingdom”, another community practicing similar living practices and bartering.

The 3rd act of this season clearly belongs to the threat of Omega and her band of whisperers, a name given to their practice of de-skinning zombies in order to wear them like masks. Her group, a more primitive gang, exists in less accommodating circumstances. A nomadic and animalistic bunch, they have no interest in saving mankind. Rather they choose to just coexist with its reality and hardships. Beta, her right hand man, acts as a loyal strong arm whom aids Omega in attacks. Void of rules, they set a new precedent with other communities by establish a boundary per way of be-heading several of the residents on pikes. 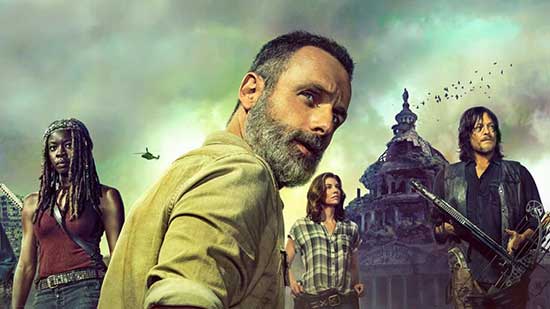 Well, Negan now spending most of his time in a jail cell, has definitely moved his command and ego down a notch or 2. Unfortunately, because of his extended incarceration, it tends to sway the perception that he is repented and starting to adjust his perspective to one to be forgiven and accepted. Well, season 9 tackles that idea by allowing Negan to escape and face the legacy of his ways. With the Saviors sanctuary now distressed and forgotten, Negan is reminded that his reign of power was only fleeting. As a result, he returns to the comfort of his cell (a place he can relax, read a book and protected from the ever present world of the un living.

As we have found in the WD universe there is always another demented & corrupt leader waiting to take his place. Omega, a strong woman warrior lacking of basic emotion provides a new worthy threat to the communities. 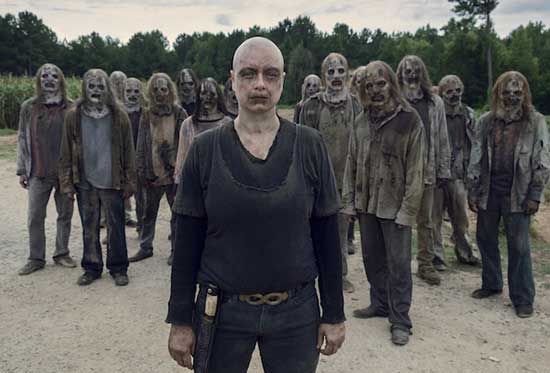 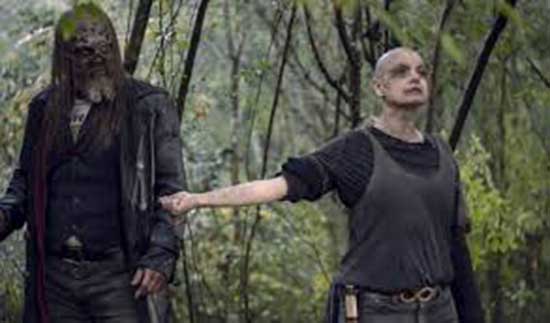 The season here takes a turn as it finally moves into winter months. Research on The Walking Dead has revealed that the timeline is alot shorter than what we as viewers perceive (now spanning over into 9 seasons). Located in the Georgia area, we get to see them finally brave the cold weather and how that affects the walkers nearby. This marks a first for the gang who has always endured onscreen during the summer/spring seasons.

The winter now in effect leads us right up to the end of season 9. Season 10 will establish a new setting battling the cold winter while also dealing with the conflict of Omega and her gang. And we can’t wait!