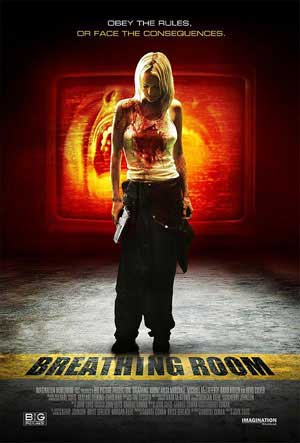 It’s her worst nightmare come true when Tonya (Ailsa Marshall) finds herself stranded in an unfamiliar room with 13 naked prisoners, each held hostage by an electronic collar and left to agonize about what horrible fate may await. As it turns out, they’re slated to die, and as the clock ticks down, the terrified strangers go toes up one by one. The catch, of course, is that one of them is the killer … but who is it?

By the time you read this, if your like me you’ve seen this story told about 5-6 times in other films. Maybe the end changes, but the concept is the same. “The Cube” series, the recent “Aquarium”, or even “The House of 9”. So let’s get to it!

A bunch of folks located in a warehouse (kidnapped and placed we assume), equipped with a electronic neck collars, instructions thrown about and the element of time. A voice instructs them and tells them this is a game, that they all must play or face certain death. Clues are given, found and revealed. Top that with the notion that there will be 1 survivor that gets to live. (obviously now the killer) So, this goes on throughout the movie. Light goes red, someone dies – rinse repeat and we get the gist here. The story itself is not about the actions but more the interactions or being locked in a room facing death among strangers. You may enjoy the ride, however its not a new ride.

We are accompanied by a range of character roles that range from interesting to annoying, however I don’t think any particular character excels past there role as a future victim in this film. Directed by John Suits, I believe the emphasis here was more to create a film on a minimal budget and to let the human interaction sell the film. By the end of the film I didn’t really gain much from there performances than when I started.

I was interested in the initial direction, but became weary after awhile as we know where this was all leading. Different in this film is the fact that after all is said and done, we do get to see the men behind the curtain..so to speak. That part is a nice change. however I never really got the point of the film. I don’ t like to spoil things, so I’ll leave it at that.

Was this an ok film? yes it was ok. I just felt there was more deja vu going on than originality. Surprise ending?…yep, though I kind of figured it out 15 minutes into the film. So maybe it wasn’t so much of a surprise. This film does have its share of frustrations as you find yourself saying many times why didn’t they try that or attempt this… Set design was low budget. Heck it’s a warehouse, nothing more. The props were basic, the premise was derivative, however it may provide entertainment to fans of “cube” style movie as its got cube written all over it without the science fiction and the cool executions.