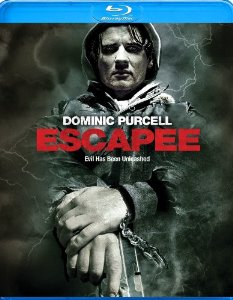 While on a class observation trip at a local mental hospital, young psychology major Abby Jones (Christine Evangelista), has a chilling encounter with high-risk patient, Harmon (Dominic Purcell). She returns home for an evening of normal study with her two roommates unaware of the darkness shes awakened within him. Later that evening a storm moves in, while Harmon escapes leaving a trail of death, as he makes his toward an unsuspecting Abby.

Meanwhile, Abby and her roommate Lynn (Carly Chaikin) receive a visit from Carter Thomas (Scott Elrod), the neighbor cop across the street, warning them about a local peeper lurking in the area. He reassures them that he is close by and as long as they keep their curtains closed and doors locked they are safe. Little do they know, not even Carter can protect them from the rage unleashed by Harmons newfound obsession, Abby.

Secure in Carters cocoon of safety, the girls continue studying into the wee hours of the morning seemingly sheltered by the horrific events happening around them. As the girls sleep, the storm takes a turn for the worse, darkening the neighborhood and trapping them in Harmons web of terror

“Escapee” (2011) is one of those films that survives because guys in dorms have nothing better to do on a Saturday night, than sit back, eat popcorn, and make fun of bad movies. That is not necessarily a bad thing, as this film seems to know what its audience expects.

Dominic Purcell portrays Harmon, a recently escaped convict from the local mental hospital. While Purcell is a great choice, and delivers a fine performance, his character has almost no lines until the third act of the film. The rest of the film depends on Abby (Christine Evangelista) and Detective Jensen (Faith Ford). Both actresses come from comedic backgrounds, which seems to be their strong suit. 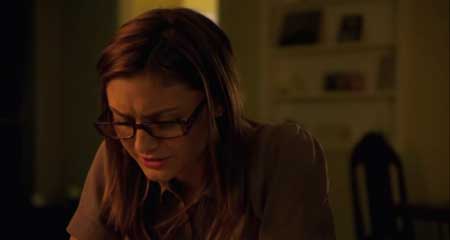 Director Campion Murphy seems to try to achieve something more than the norm with this piece. Its cinematography, while not perfect, offers some nice neo-noir shots, with extensive use of shadows to hide or convey information. Watching this film on DVD can make it hard to see though. Some real tries at character development are given, but never fleshed out fully. One or two more drafts of the script could have helped this problem immensely. Like previously mentioned, Purcell is the shining star as the psychopathic antagonist. This writer simply wishes he was given more dialogue in the first two acts. The beginning of the film also offers some good misdirection, that leads the viewer guessing as to what exactly is going on. 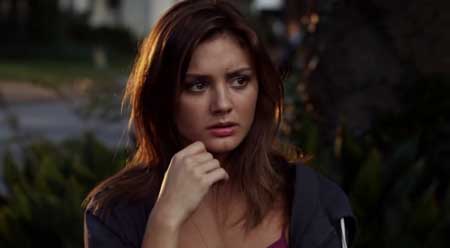 In the beginning of the film, Purcell does a great job surprising the audience with his initial outburst at the mental hospital he is staying at. His further escape from the hospital (no spoiler there, the movie is called “Escapee”) leaves much to be desired, as do many of his kills. After a few murders, he walks out of the hospital. With a title like this, the viewer is really expecting some sort of fun escape scene. A few deaths were handled off-screen in a bit of a Hitchcock nod, but most are uninventive standards of the slasher genre. This film’s style tends to be reminiscent of Rob Zombie’s “Halloween” series. It seems to throw in a bit of the slow burn technique used in Ti West (House of the Devil) and Adam Wingard (A Horrible Way to Die) films. Unfortunately, most of its tricks are simple, and genre fans will spot them immediately. Purcell gives the audience what its looking for by the end though, and for most fans of serial killer films, it will be a bit of a pay off. 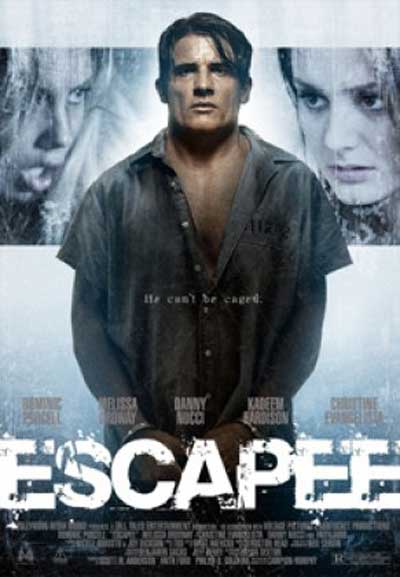 This piece will do well as a “party” film though. Its core audience is young men, who will find this on netflix, or at their local video store, and revel in guessing along with the film. It offers itself nicely to this. Murphy seemed to know who would be sinking their teeth into his film, and gives his audience what they want: sexy girls (check), gore (check), language (check), and a sort of twist ending (check). It offers many quiet moments between events, perfect for a small discussion on what will happen next. Murphy also seems to know that the college coeds of focus in this film, are humorous, and does not try to hide it. This is a plus. A little bit of humor can go a long way in making a horror/thriller much more fun. A well-placed laugh just before a cheap scare or two can make or break a movie like this. Though, the small bits of humor do not actually save this film, they set up a bit of a tongue-in-cheek atmosphere that will help the audience play along for an hour and half. 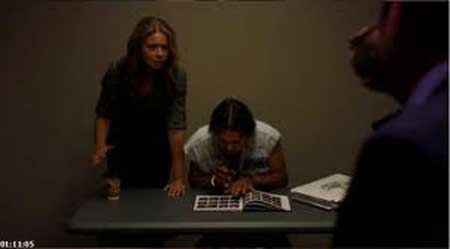 All in all, this film is slightly forgettable, but worth watching with friends. Some good laughs, a few scares, and some decent talent add up to an acceptable night in. It does not offer anything new, so hardcore genre fans may be bored. Young fans, and those new to serial killer slashers will find a few thrills and surprises though.

Escapee has made it way onto Bluray per Anchor Bay!