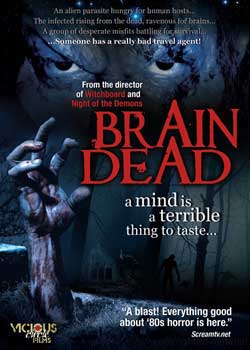 The story of six people caught in the unusual (except in horror films) predicament of being stranded in a deserted fishing lodge with a host of alien-infected, mutant amoeba-controlled zombies at their doorstep.

An asteroid tears through space looking for a home to call its own. Fortunately for said asteroid, it eventually finds one by embedding itself in the head of an old fisherman who was only trying to enjoy a day out in the wilderness. From there, the ooze secreting from the tiny ‘roid transforms our fisherman into a brain-feeding, super-strong, lightning-fast zombie-ish dude on a mission to transform as many folks as possible into an alien-infested army and take over our little rock. 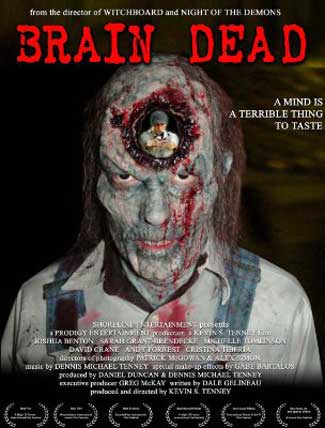 Standing in his way, of course, are six people brought together unwillingly by various circumstances – a wise-cracking dude handcuffed to a merciless killer; a Jim Baker-ish lout of a minister with his DD-cup mistress, and two beautiful, skinny-dipping hikers who got lost in the woods. They all take refuge in an abandoned fishing lodge and faster than you can say, “Thrill me”, they must band together for survival as they become mankind’s only hope against the zombie thingies outside trying to get in for another dose of brains, and more than likely that whole wiping out of us pathetic puny humans scenario too…

“Alright, pal…you want us, come and get us. But the joke’s on you, cause I already lost most of my brain cells due to heavy drinking.” – Clarence Singer.

I don’t get to say this very often in any of my reviews, so you bet your sweet, tight lil heart-shaped ass that I’m gonna take the opportunity to say it now – I FUCKING LOVE KEVIN TENNEY!!!! Granted, my love for him is in a purely platonical, heterosexual fashion; but it’s still a love nonetheless. And why shouldn’t I love him? Not only can the man make funny yet intense and gory horror movies, but he gave me two of my hugest teenaged-years star-crushes back in the 80s that slammed right through the boarders of obsession (not to mention tons of extra minutes spent in the shower, if you catch my drift…) with Tawny Kitean in WITCHBOARD and especially Amelia Kinkaid (giggity!!) in the original NIGHT OF THE DEMONS. The man might not always be on my radar like he should be, and while I can’t praise everything because I have yet to watch THE SECOND ARRIVAL, I will say this – when Tenney is on top of his game, which to me so far is always – there’s always a party in his flicks, and every single one of us is always invited…you really can’t ask for much more than that from a director, folks. 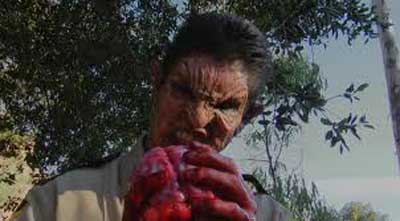 I don’t talk about acting that much in my reviews anymore unless I’m either justifying an indie film budget or lambasting Paul Walker, so let’s just rectify that now, shall we? Joshua Benton is The Shit, plain and simple. Dry, sarcastic wit delivered with perfect comedic timing – that’s what it’s all about it here. And if this dude doesn’t get some recognition and become an A-list (or at least C-list) leading man/comedian soon then there is truly no justice in this world. Sarah Grant Brendecke and Michelle Tomlinson are both insanely beautiful and talented, and the way they play off each other and Benton’s character is nothing short of magical to watch. And let’s not forget David Crane as the psycho killer Bob, who plays the role teetering the very fine line between dumb redneck and cold-blooded calculating genius murderer with total perfection; and he even has a few funny lines of his own throughout the movie. 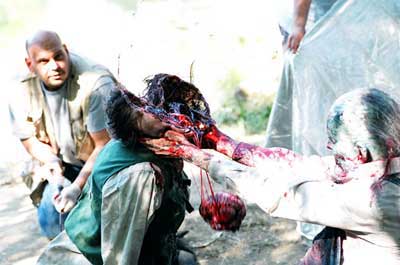 I really don’t have much more to say – if I haven’t convinced you by now that this flick belongs in your collection to watch over and over and over again, then either my incredibly irresistible powers of persuasion are slipping, or you just don’t like horror movies. So just in case there’s still even a remote chance you still need convincing, I’ll leave you with this…