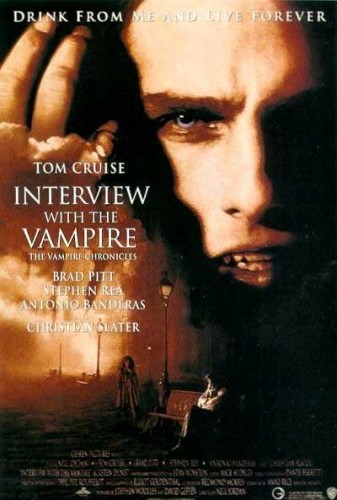 “It hadn’t even been a year since a plantation owner named Louis had lost his wife in childbirth. Both his wife and the infant died, and now he has lost his will to live. A vampire named Lestat takes a liking to Louis and offers him the chance to become a creature of the night – a vampire. Louis accepts, and Lestat drains Louis’ mortal blood and then replaces it with his own, turning Louis into a vampire. Louis must learn from Lestat the ways of the vampire.” (courtesy IMDB) 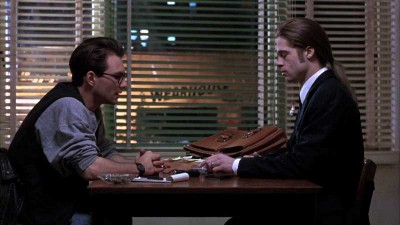 A first-person account of what it is like to be an immortal creature of the night, unlike the full-blooded escapades of Bram Stoker’s notorious Count Dracula, Rice’s vampires are an angst-ridden lot, prone to interminable introspection and procrastination, and none more so than the guilt-wracked protagonist of Interview With The Vampire, two-hundred-year-old Louis Le Pont du Lac (Brad Pitt) whose maudlin ramblings are related to a mortal interviewer (Christian Slater replacing the late River Phoenix). 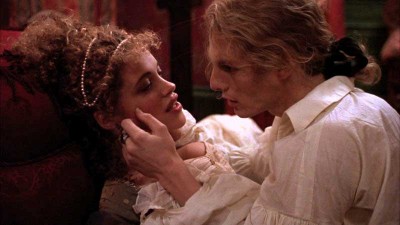 A suicidal widower and master of a sprawling plantation south of New Orleans, Louis’ invitation to his own destruction is accepted by the vampire Lestat (Tom Cruise), a flamboyant French nobleman whose voracious appetite and cavalier attitude make him a real hit at parties. Together with the doll-like Claudia (twelve-year-old Kirsten Dunst), the trio traverse the centuries in search of others of their kind, until their fractious relationship is undone by blood and fire. 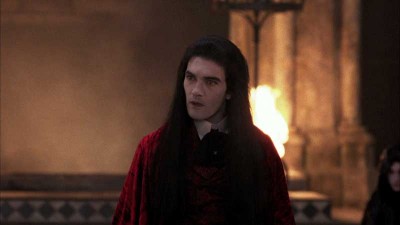 Given its passionate cult following, Interview With The Vampire was destined to be a provocative proposition as a motion picture, a fact endorsed by the controversy that surrounded the casting of Tom Cruise in the pivotal role as Lestat. Anne Rice, who had always imagined him as a young Rutger Hauer, made no secret of her disappointment in Cruise’s casting, but did an abrupt about-turn when she finally saw the film, declaring in an apologetic spread for Variety that all the qualities of her beloved vampire hero were alive in Tom Cruise’s courageous performance. Furthermore, she’s since gone on record as saying, “I believe Tom’s Lestat will be remembered the way Olivier’s Hamlet is remembered. Others may play the role some day, but no-one will ever forget Tom’s version of it.” 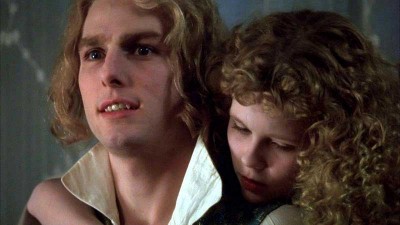 Well, I don’t know about the Olivier part, but with his wavering accent and sheer earnestness, Cruise is not only unforgettable but absolutely terrible as Lestat, poncing about in a puffy shirt and ranting his lines with all the conviction of Jeremy Irons in Dungeons And Dragons (2000). As a matter of fact, I do Jeremy Irons a disservice by comparing the two. With only Stuart Townsend’s charisma-free turn in Queen Of The Damned (2001) as a character yardstick, it’s difficult to say who’s worse. 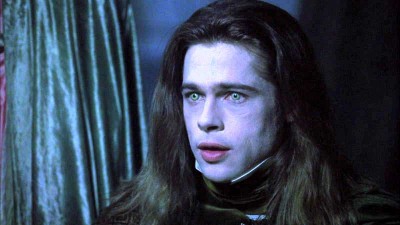 On the other hand, Brad Pitt is mostly required to look sexy and sulky, which he does successfully. Stephen Rea briefly registers as the mischievous Santiago, and Antonio Banderas‘ brooding Armand is astute casting – even if the character was an immortal teen in the original novel. The toughest gig, however, is handled with tremendous aplomb by the pre-pubescent Kirsten Dunst as the petulant Claudia, an eternal child whose frustration with her physical immaturity reaches a nasty apogee. 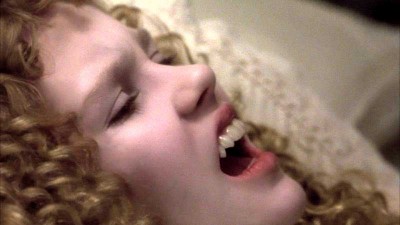 Unconventional sexual relationships are a recurring theme in Neil Jordan’s films, and he often finds a sympathetic side to characters that audiences would traditionally consider deviant or downright horrifying. For instance, his film The Miracle (1991) followed two characters who struggle to resist a strong, incestuous attraction, while The Crying Game (1992) made complicated, likable characters out of a terrorist and a transgender woman. Interview With The Vampire focuses on the intense, intimate interpersonal relationship of two undead men who murder humans nightly, accompanied by an equally lusty vampire woman who is eternally trapped in the body of a little girl. While Lestat is depicted in an attractive but villainous manner, his partner Louis and the child vampire Claudia are meant to capture the audience’s sympathy despite their predatory nature. 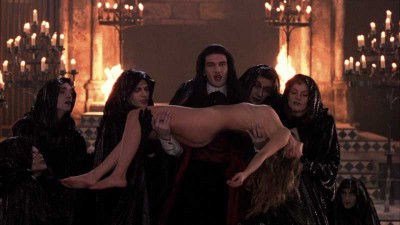 Although visually enchanting and faithfully embodying the finer aspects of the novel (the Theatre Of Vampires sequence is a real stunner), it’s the sluggish pace and garrulous Tom Cruise that finally drives a stake through Interview With The Vampire’s labouring heart. And it’s on that note I’ll bid you farewell and look forward to your company next week when I have the opportunity to freeze the blood in your veins with more sickening horror to make your stomach turn and your flesh crawl in yet another fear-filled fang-fest for…Horror News! Toodles! 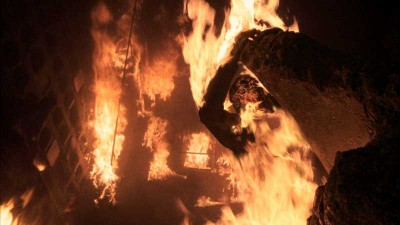