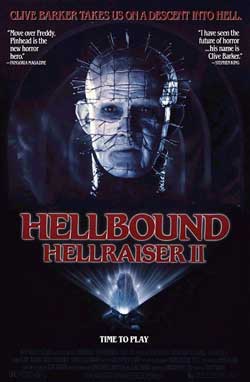 After solving a creepy puzzle, unscrupulous Det. Joseph Thorne (Craig Sheffer) finds himself trapped in hell with the hair-raising ghoul Pinhead (Doug Bradley) and a murderer at large. Thorne tries to outwit Pinhead and discover the killer’s identity in an effort to escape, but the trail keeps leading back to one man: Thorne. As his transgressions begin to torment him, Thorne learns the real meaning of the word

After the surprising success of the original Hellraiser, New World Pictures realized they had a potential franchise on their hands and tossed a sequel into production and in 1988, Hellbound: Hellraiser II was unleashed onto the viewing public.

Hellbound starts off with a quick montage of the final showdown between Kirsty and the Cenobites from the end of the original Hellraiser before introducing us to Captain Elliot Spencer (Doug Bradley) as he solves the Lament Configuration and is turned into Pinhead. The film then pulls a “Halloween II” and picks up a few hours after the events of the first film. We find Kirsty safe and sound in a mental hospital where she is being questioned by a detective who doesn’t believe her story about the Cenobites.

We are then introduced to Dr. Channard and Dr. Kyle who listen intently as Kirsty essentially recaps the first film with a montage of scenes from the original, including a few extended scenes from Julia and Frank’s love scene and Julia and Larry’s wedding. After Kirsty finishes telling her story, the detective gets a call on his walkie talkie from his men at at the crime scene telling him of the evidence they’ve found, plus the mattress that Julia died on. Dr. Channard and Dr. Kyle take their leave and Kirsty falls into a restless sleep before wandering off through the halls of the hospital. It’s here she sees Tiffany, a mute patient who seems to have a knack for puzzles. Kirsty runs into Kyle and he leads her back to her room. Kirsty wakes up later that night to find a skinless Larry lying on the floor of her room with a message reading “I’m in Hell, Save Me” written in blood on the wall.

The next day she tells Kyle about what she’s seen, but he doesn’t believe her. Before he can tell Dr. Channard, he overhears the doctor on the phone with one of the policemen, negotiating for the delivery of the mattress to his home.

A little breaking and entering later and Kyle finds himself in Dr. Channard’s study, filled with bizarre occult objects and symbols written on the walls. The bloody mattress is in the center of the room, as well as three model versions of the Lament Configuration. Dr. Channard arrives with one of the hopelessly insane patients from the bowels of the hospital in tow.

What do you get when you mix a crazy person who’s convinced they’ve got bugs all over their skin with a straight razor? A bloodbath and the exact thing that Channard needs to resurrect Julia. Kyle makes a quick escape while Channard is distracted, and returns to Kirsty.

Before long, Channard helps Julia regain her skin as Tiffany is brought in to unlock the Lament Configuration. Then we’re off to Hell, Julia showing Channard what he’s longed to see for so long, and Kirsty desperately trying to find her father.

I’ll come right out and say it, you can disagree with me if you want, but I think Hellbound is the perfect horror sequel, hands down. Everything about this movie is fantastic and true to the world that Clive Barker set down in Hellraiser. Of course, this film also benefits a lot from a bigger budget than the original film, as the story branches out into a few more locations than just one house. The Channard Institute is what you would expect from a hospital and the interior scenes that take place there bear a little resemblance to the hospital in the original film, though I think that’s more coincidence than anything else. Dr. Channard’s house is expansive and has a very cold, sterile look to it that adds to the scenes of horror that take place within, like Julia’s resurrection and the death’s of her victims. And of course what about Hell? The first film briefly touched on the look of Hell, and this film extrapolates on that design, as Hell (or the Labyrinth as it’s sometimes referred to in the film) is full of long dimly lit corridors. In several shots this is expanded with a matte painting that borrows heavily from M.C. Escher’s famous “Relativity” painting.

You know, the one with all the crazy stairs.

Hellbound also builds on the mythos of the first film, introducing us to Leviathan, the “Lord of the Labyrinth” as Julia refers to it, which is a giant spinning obelisk decorated like the Lament Configuration that spews a black light that reveals all the horrible things that you have done and/or experienced in your life when it hits you. Another major addition to the mythos is the idea of a personalized Hell, as both Tiffany and Kirsty stumble into areas of the labyrinth that are designed to torment them specifically. This concept of a personalized Hell is largely ignored in the series until “Hellraiser Inferno”, where it’s used to brilliant effect.

The soundtrack, once again composed by Christopher Young also benefited from the larger budget, as Young was able to have a full orchestra for the score. The new themes written for the film are much broader and in some cases more bombastic than those written for the original film. The theme for Hellbound especially helps to instill into the viewer that this film is much bigger and more epic than the previous film.

Hellbound takes a similar approach to the Cenobites as the original film did, in that they only appear a few times on screen and when they do, they don’t have much dialogue; an incredibly effective way of using the characters that the later films seemed to ignore and in the case of Hellraiser III, prove why the Cenobites shouldn’t have dialogue. Or if they do have dialogue, it should be well written and not stupid f*cking one liners. This is also the first film to introduce a new Cenobite, going so far as to show how a Cenobite is created. This is also the first time we are introduced to Pinhead’s back story, including what looks to be an incredibly painful creation sequence where his head and face are cut into the grid pattern, before the nails driven into his skull.

Ashley Laurence reprises her role as Kirsty, alongside Claire Higgins as Julia, and of course Doug Bradley as Pinhead. All but one of the original Cenobite actors return for this film, as Barbie Wilde takes on the role of the “Female Cenobite” after Grace Kirby couldn’t or wouldn’t take the role. Oliver Smith once again dons the bloody muscle suit in this film, also playing the madman who cuts himself to pieces on the mattress in Channard’s study. And speaking of Dr. Channard, Kenneth Cranham plays the doctor with such poise and grace that you never suspect what kind of a sick and twisted bastard he really is. Imogen Boorman plays the mute Tiffany and brings an innocence to the film that is so deeply in contrast to Julia and Channard that it leaves you wondering how she ended up in this whole mess in the first place.

Hellbound could have easily been a total train wreck, between actors not returning and the rushed schedule to get the film into theaters the following year, it could have easily derailed the franchise completely. Instead, Hellraiser fans are treated to one of the best films in the series and the only sequel that can stand beside the original Hellraiser. Hellbound is everything a Hellraiser fan could possibly want: it further develops the mythos in a believable way, it’s got a solid story, and most of all, it takes everything that was great about the original film and expands it all in logical directions.

I love Hellraiser II almost more than I love the original Hellraiser. So if you haven’t seen this movie, do yourself a favor and rent it.