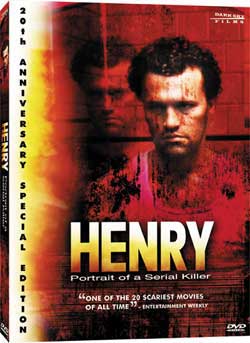 One of the most notorious films of the 1980s still terrifies. Serial killer Henry serves as mentor to dim-witted fellow killer Otis and as the object of his sister’s affections. Trouble is, Henry’s heart is too hard for friendship to penetrate. Disturbing, chilling and full of knockout power, this cult classic includes a half-hour interview with writer-director John McNaughton.

Hell-o, True Crime buffs and all who have that darker nature to them somewhere inside. We all do. Sometimes, some hold it in better than others. Today’s killer flick is Henry: Portrait of a Serial Killer-The Director’s cut. This film is based off of the true story of Henry Lee Lucas and his partner in crime, Otis Tool. This film has been deemed a “Masterpiece of modern horror” and “The most controversial film of the decade.” Who am I to argue with that? This is one of my favorite films of all time. I tend to lean more toward the true stories or those that at least could be true. In this case, it is one hundred percent factual.

Throughout most of the beginning of the film, we see the aftermaths of the murders, with ADR(Audio Digital Recording) of the screaming victims overlapped, instead of viewing the actual murders as they took place. This is the first of it’s kind to do so and even though no on-screen murder is shown, the aftermaths are quite gruesome. You can still get a sense and mental picture of the torture endured with the screams of rage and fear overlapping the corpses of the victims.

We meet Henry, played by Michael Brooker(JFK, Days of Thunder and my personal favorite, Stephen King’s The Dark Half, where oddly enough, he plays a cop). Henry follows a woman to her home, but changes his mind when her husband comes up to greet her. He then finds a hitch-hiker on the side of the road with a guitar. He picks her up instead. He kills her and brings her guitar to his sidekick and old cell mate, Otis Tool, played by Tom Towels (The Prophecy II, House of 1,000 Corpses and The Devil’s Rejects). There, Henry meets Otis’ sister, Becky, which had just arrived from the airport. Becky is played very well by Tracy Arnold (The Borrower).

From there, Becky questions Otis about Henry and finds out a little of his dark past. She soon falls in love with him as Henry is teaching her already f*cked up brother how to kill. Otis also has a sexual attraction to his sister and a hint of bi-curious tendencies. Henry is an exterminator by day and exterminates humans by night. Otis works at a gas station and sells marijuana on the side.

Otis and Henry sometimes argue like a married couple. Otis is the sinisterly dark comic relief throughout the film. All three are bluntly uneducated. Henry shows Otis the tools of the trade in murder and Otis soon can’t get enough. They kill a television repair man and take his color T.V. And video camcorder. This particular event and the scenes that follow have influenced many films in the genre to follow, suck as Man Bites Dog and August Underground (among many others). They murder a family and Otis is so enthralled by there low budgeted snuff film, that he watches it over and over in slow motion. I will not ruin the rest for you, this is only the beginning.

The film was inspired by an interview with Henry Lee Lucas on Twenty/Twenty. John Mcnaughton wanted to make a horror movie without all the big special effects or monsters, which was really all he could afford at the time. The home video movement was about to shift into gear and he wanted to cash in early. He made Henry for a budget of one hundred thousand dollars and a crew of three to five people. He originally wanted it to be an exploitation film, but Richard Fire steered him in another direction, with drama added along with the horror.

John wanted to make a Horror movie with no moral resolution at the end. Many disagreed with his tactic. I think it’s the way to go. Horror should not possess a moral resolution. Many actors for the position looked down on the film as demoralizing. He says that if you watch it about five times, you can see a bit of comedy included. That is not hard to miss with Otis’ antics throughout the film. Many left the theater during the home invasion scene, in more than one showing. The film originally came back from the MPAA with an X rating.

The gore score is quite high and brutal. Although there are only around seven on-screen murders, many more corpses are shown of the aftermaths. Jeff Segal did an awesome job on the Special Effects. There is a bottle in the face of a prostitute during the opening that was quite satisfying. An eye gouging and merciless stabbing with a small hair comb was effective as well. A few of the other murders consisted of a good old fashioned neck twist and a television smashed over the head.

DVD extras include an interview with the Director, John Mcnaughton. There are trailers for Henry and it’s not so triumphant sequel, Henry II. The extras are topped off with behind-the-scenes notes and filmographies on the stars and Director.

Over all, this is a film for true fans of Horror, Serial Killers or True Crime. It is a very instrumental time piece of the genre and one of the first films released on home video cassette that welcomes one of the most infamous Serial Killers of all time right into your living room.. The wicked opening theme song by Robert Mcnaughton has been redone by the Death Metal band Malevolent Creation for their intro to Eve of the Apocalypse (on the album Retribution) and Fantomas. Samples(“Yeah… I killed my momma.”) have been used by the Death Metal band Mortician. I highly recommend this film to anyone that wants to see Horror the way it was meant to be seen. Raw and unforgiving. There is one other film called Confessions of a Serial Killer, about Henry Lee Lucas and Otis Tool, but it fails in comparison to this original classic. I give this film, Henry: Portrait of a serial Killer, FOUR HORNS UP.

Henry Portrait of a Serial Killer