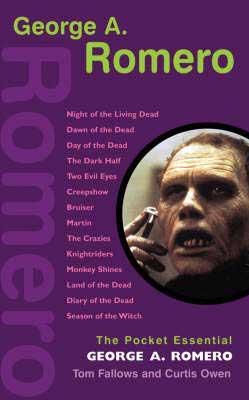 This book is a pocket guide to all things George A. Romero. The authors cover Romero’s movies from “Night of the Living Dead” to “Diary of the Dead”. Each movie is given a brief synopsis, behind the scenes information, reviews of the time and the social climate. They clearly understand that Romero’s films must be viewed through the eyes of the time period, and that each element plays off each other. “Night of the Living Dead” is a mirror to the social unrest of the time. Each section on each film is brief and to the point. The write-ups seem to be fair and not raving fan-boy like on every film Romero made. The writers give reasons why a film is successful or not a successful one. “There is always Vanilla” the movie the filmmaker made that is clearly not a gene piece is a not a favorite of anyone’s but does show some growth in Romero that comes to a head later. The authors are very hard on “Monkeyshines” and “The Dark Half” as being compromised work from his Hollywood period. Lost films of Romero and films that grew from Romero’s work are covered as well. “Zombie”, “28 Days Later” and “Shaun of the Dead are among those to be found in the chapter called “Children of the Living Dead”

The big question is can the writers give the reader enough information on George A Romero for the work to be called essential and the answer is a big yes. The authors get to the point and make their case with the fewest words possible. The book is a quick read page wise but information wise there is a lot to take in which make the book one you will want to turn to again and again. Tom Fallows and Curtis Owen know their facts and love the films.

If you are a George A. Romero fan you will want a copy of “The Pocket Essential George A. Romero” for your very own, you can’t have mine I am looking something up thank you very much.