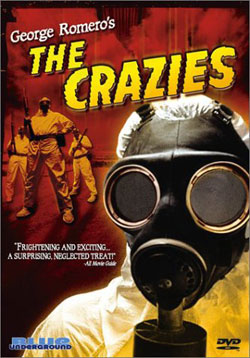 When a government plane laden with biological weapons crashes in a small Pennsylvania town in this George Romero film, its deadly cargo seeps into the water supply — and anyone who drinks the water becomes stark, raving mad. David (Will McMillan), a firefighter, and his wife, Judy (Lane Carroll), are two of a very few left unscathed. To save themselves, they and a few others attempt to escape … but for some of them, it may be too late.

QUICK FIX:
Seems as though the US military has been conducting nefarious (LOVE that word lately) top secret G-14 classified bio-weapons experiments, and an Army plane carrying one of said experiments crash-lands in the hills outside of Evans City, PA, spilling out a virus that infects the water supply. The town’s residents who don’t die from the virus become homicidal “crazies” causing their own brand of mass destruction to themselves, their property, whomever they come in contact with, or all of the above.

Meanwhile, the military arrives in town setting up borders trying to contain the virus (and people) from spreading and an all out war erupts between soldiers and crazies. Now it’s up to shirtless Fireman Dave and (damn the luck) fully clothed Nurse Judy to save the day and bring peace and order to the town while an Army Doc races against the clock to find a cure before the virus spreads outside of town and the big brass in D.C. nukes the town faster than Indiana Jones in a lead-lined refrigerator.

RAMBLINGS:
Every single time I hear the words “infected water supply”, I cringe. Even in these high tech modern times, over 35 years since this movie was made, small town Kansas can have its share of hairy situations itself these days. Ever gotten a glass of water out of the faucet on a hot summer day after spending all afternoon in the blistering sun doing yard work, only to put that glass of ice cold heaven up to your lips and take 4 or 5 big gulps before you realize that it tastes like a rusted fish? No?? Want to?

Then by all means, come look me up – it’s a real treat. But, I guess that’s what happens when our water is drawn not from some giant underground natural spring, but from a reservoir south of town teeming with fish guts and goose sh*t, and ran through nothing more than the equivalent of an air filter to a ’69 Dodge Charger. Yet another case of real life being even more horrific than horror movies…

Now THIS is the Romero that I grew up on and love so much – the George Romero who could make a very kickass flick that didn’t involve something with …OF THE DEAD tattooed on the end of the title – that could have some subtle social commentary blended very well into the story coupled with hellaciously dark humor scattered throughout (see also MARTIN, and later on in his career CREEPSHOW and DARK HALF), but without beating us over the head with a severed leg and force-feeding his takes on society down our throats against our (or my, as the case may be) will like he did with LAND and especially DIARY.

And judging by current online rumblings and my own viewing of the new red band trailer for SURVIVAL OF THE DEAD, he’s going to be shoving his societal grumblings down our throats with his size 12 boot even harder this time, and I don’t really care much for that. Not that I’m not down with thinking now and then; there’s nothing wrong with that and sometimes when I’m really blasted on tequila, I actually enjoy it. But the majority of the time I want my horror bloody and clueless, just like the college girls hidden in my basement.

LAST WORDS:
Call me crazy (no pun intended), but with the exception of his first couple of …OF THE DEAD flicks, I actually prefer the Romero that gave the world THE KNIGHTRIDERS, CREEPSHOW, BRUISER, MONKEY SHINES, etc…but out of all his movies, both Zed and non-Zed, THE CRAZIES remains my favorite. I truly believe that it was ahead of its time when it came to its subject matter and possibly even its commentary, which might have hampered it from becoming his next big breakout masterpiece. Seems the man can’t catch a break very often when it comes to commercial success unless he makes a zombie movie, so sometimes you gotta go back to what brought you to the dance, I guess. I also highly recommend you see this before the remake hits us in February of 2010. THE CRAZIES still stands the test of time, even more than 35 years after the fact, and if you’re a fan of non-zombie George like me then this movie most definitely deserves to be in your collection as soon as possible.