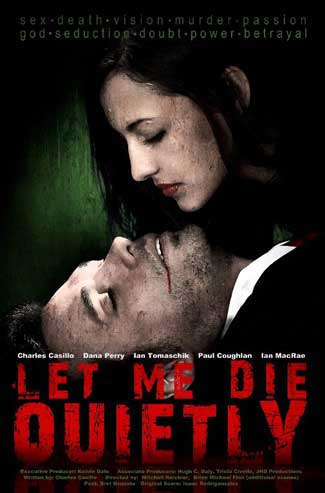 Breaking Glass Pictures has announced the January 4 DVD release of directors Mitchell Reichler and Brian Michael Finn’s neo-noir “Let Me Die Quietly.”  The film follows a broken-down alcoholic who’s haunted by psychic visions of murder victims.  When a chance meeting brings him into contact with a woman who has the same dark gift, both set out to save the victim of their shared visions.

Mario is a man who’s been tortured by visions of violent murders all his life.   An encounter, a location, or even a touch can bring him the terrifying final sensations of a murder victim. Now, as his visions intensify, he senses his own impending death.    With an encroaching sense of tragedy, Mario sets out to save the life of the last victim in his final premonitions.  Then, he has a chance encounter in an elevator with a beautiful woman, Gabrielle, who herself is psychic and seeing different aspects of the same murder.  These two lost souls join forces in an attempt to stop a serial killer, but, in their quest, they may end up leading each other down a path of self-destruction. “Let Me Die Quietly” played at national film festivals and took home such accolades as Best Suspense Feature at the Indie Gathering Film Festival and Best Suspense Thriller at the New York Film and Video Festival.