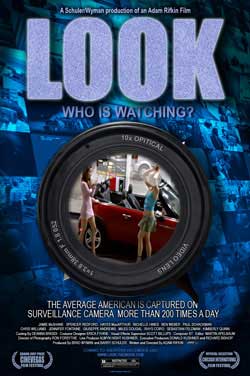 A high school teacher, a department store manager, a convenience store clerk, a lawyer and two sociopaths star in five interconnected stories, all filmed from the perspective of the hundreds of security cameras people pass, and ignore, every day. This fascinating drama from director Adam Rifkin underscores the increasing lack of privacy in the modern world — and asks whether people can ever be truly alone.

Did you know that with all of the surveillance camera’s that are posted everywhere that the average American is caught on film at least 200 times a day? Isn’t that wild? I mean you know there are cameras in some places and try to avoid doing anything embarrassing but sometimes people forget and end up picking their nose or complete some other nasty feat that we really wouldn’t want anyone to see. The film Look is about just that, but by no means is it a horror film. Yes, some of things we see is horrible but this would never be categorized as horror. No ghosts, serial killers or slashers will be found in here… just some weirdos.

Look shows you how there are hidden camera’s in women’s changing rooms, outside of schools focusing on the parking lot, or even at the intersections of the streets. You used to be able to get away with simple things like running a red light, or even backing into a parked car at the mall and bolting, but not now. I first thought I wouldn’t like this film but it sucked me in like a daytime soap opera get’s to the unworking mother! There was so much drama to see plus wonder about what the outcome of certain things would be. This movie was a freakin trip that will make you realize just how messed up people really are.

There are some really funny things on here but then there are some really messed up things here as well. Like an attractive blonde is in the elevator by herself and passes gas. It must really be foul by the way she holds her nose and the look on her face. She tries to fan it away and then she gets to her floor. A man named Marty who works upstairs gets in and gags holding his nose. Well a few of his co workers get on and gag while trying to hold their breathe, so they think poor Marty did it. He gets off and they all start laughing thinking it was him! This poor guy is constantly tortured at work, they like to play pranks on him!

Then you have Tony Gilbert who is the manager of a mall department store, and believe me he is a total hands on type of guy. He is a total sex addict and womanizer. He has a lot of female co-workers who he likes to feed his lines of bullsh*t to see if he can get in their pants. But he is smart, he makes sure to tell them to keep it on the down low or they could get fired. Really he wants them quiet so they don’t figure out he is sleeping with all of them. He tells them it’s time to go check the inventory in the stock room and what that really means is they are going to go get busy!

Teen seductress Sherri likes to play games and doesn’t care who will be hurt in the process. After she becomes bored with her High School boyfriend she tells her best friend that she has a crush on someone else. But she won’t fess up to who it is and tells her friend he’s her new little project. So you are left wondering who it could be until you see Sherri stalking her teacher Mr. Krebbs. Will he cave into her advances and cheat on his pregnant wife of seven years? Or will he stand strong and resist her heavy flirtation and come hither attention? This girl is like a little lolita at age 16. 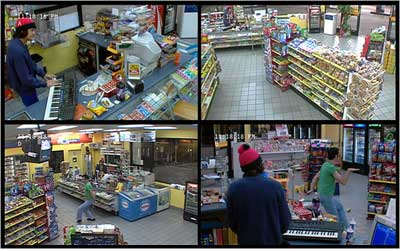 You will see a few other scenarios as well like a married man with a family who installs video camera’s in his home for the fear of a nanny abusing their children when she watches them. Maybe his wife should put some camera’s on his ass and see what he likes to do in his spare time. He might play like he loves his happy family life but in private, he is a total freak. If you’d like to get wrapped up in some dysfunctional storylines, then this is the right film for you!