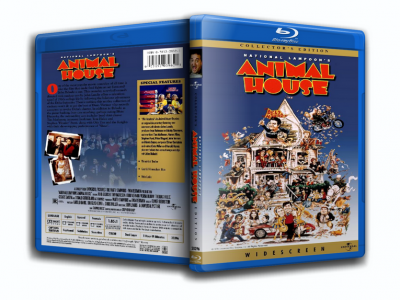 SYNOPSIS:
“Faber College has one Frat house so disreputable it will take anyone. It has a second one full of white, anglo-saxon, rich young men who are so sanctimonious no one can stand them except Dean Wormer. The Dean enlists the help of the second Frat to get the boys of Delta House off campus. This film gives high-jinks and fooling around a bad name. The Dean’s plan comes into play just before the homecoming parade to end all parades for all-time.” (courtesy IMDB)

REVIEW:
In the late seventies and early eighties, director John Landis was pretty much the king of Hollywood comedy. Schlock The Banana Monster (1973), Kentucky Fried Movie (1977), The Blues Brothers (1980), An American Werewolf In London (1981) and Trading Places (1983) all struck a chord with the suburban demographic. Then, tragically, a helicopter struck actor Vic Morrow and two children during the filming of Twilight Zone The Movie (1983) while Mr. Landis was in charge, and it sometimes seems like he’s been trying to shake-off this unfortunate stigma ever since. Animal House (1978), also known as National Lampoon’s Animal House, was Mr. Landis’s breakout hit, and still remains one of the most successful comedies of all-time, featuring characters who were basically disenfranchised bums, achieving acceptance and validation without compromising their offbeat and often hilarious agendas. Add to this some classic and wildly over-the-top slapstick with issues pertaining to race, identity and class, and you just might have all the ingredients for a great comedy. 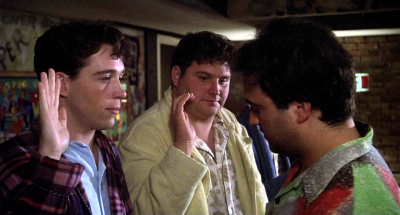 Written by National Lampoon scribes Doug Kenney (who also plays the original dork Stork), Chris Miller and Second City Television scribe Harold Ramis, Animal House bristles with an energy that few films of this genre have ever managed to duplicate. In fact, it’s this free-wheeling, anarchic pace that sets it apart from the endless stream of retarded Frat-house gross-out comedies weighed-down by the likes of Porky’s (1982) and, more recently, the ridiculous American Pie franchise. The story is simple: The survival of the Delta college fraternity is threatened by Dean Wormer (John Vernon) puts them on Double-Secret Probation for poor performance in their mid-year exams. Throw into this a bunch of manipulative arch-rivals, the puritanical Omega fraternity, who despise everything the Deltas represent (Egalite, Fraternite, Pusse), and you have a classic good-guys versus bad-guys scenario.

However, the main strength of the film is its unforgettable characters. Who could forget John Belushi as the mental Bluto, Tim Matheson as the smooth-talking Otter, Tom Hulce and Steven Furst as the wimp and the blimp, Mark Metcalfe as the evil Neidermeyer, Kevin Bacon as the trouserless Chip, James Widdoes as the diplomatic Hoover, Karen Allen as the mature-thinking Katy, or Bruce McGill as the manic D-Day? All of whom exude a distinct individuality that is sorely lacking in many of the recent additions to the genre. The characters are so likable that we don’t mind it when Belushi peeks into the sorority girls window while they undress, or when Belushi, McGill and Furst cause the death of a horse in the Dean’s office, or when Belushi spits food all over obnoxious students, or when Hulce sleeps with a thirteen-year-old girl, or when Matheson cons a girl into bed by pretending to be the boyfriend of a recently deceased roommate. 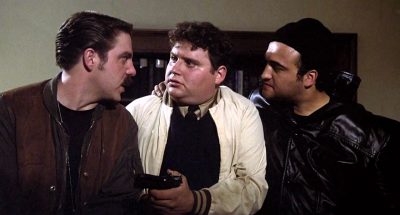 The DVD I recently viewed was about a decade old and, in terms of the image and sound quality, the film won’t blow you away by any standard. Apparently, John Landis supervised this particular release, so any viewer complaints should be directed to his office. The print, while mostly impressive, does exhibit the odd bit of grain, but it’s a minor distraction that adds a dated charm to the viewing experience, a little like the reel-changes in the Rodriguez/Tarantino grindhouse films. Likewise, the sound is a simple two-channel mono and probably the second-biggest bummer of the disc, but largely irrelevant once you get into the groove of the film, which maintains an engaging rhythm.

Indeed, a modest Special Edition by anyone’s standards and, considering the film was twenty-five years old when this disc was released, it doesn’t really push any boundaries of the technology, to say the least. Has it been properly re-released since? I sincerely hope so. The best feature on this particular disc is a fifty-minute documentary called The Yearbook: An Animal House Reunion, a fun and informative retrospective that reunites the cast and crew – the ones who were still alive, that is. Highlights include some rare behind-the-scenes footage of the late John Belushi, and Stephen Furst recounts how he stuck his photo onto the back of pizza boxes he was delivering at the time in order to land his role. 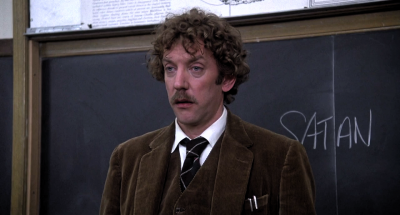 If pathos, drama and high art is what you’re looking for, then this is not the film for you. But if you’re up for a night of laughs, great music and raunchy life-affirming fun, then Animal House is ideal. Please join me next week to discover if Hollywood has yielded up a work of substance, or a nonsensical bit of fluff for…Horror News! Toodles!