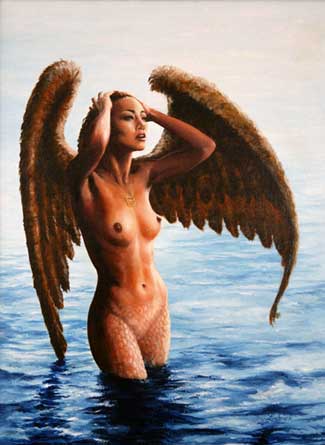 Put yourself on the ocean, on a ship exploring and looking for a new land to settle on. The waves roughly chop against your boat. In the distance you can see dark clouds and lightning fluttering on the skyline. Gulls cry in the distance, but over their loud calls, a shimmering voice emanates loudly. It’s a woman, singing a song, and immediately your heart becomes filled with infatuation and wonder. All of life’s worries melt away and your only desire is no longer to expand your civilization, but to find the beautiful woman singing the enchanting song.

You immediately turn the ship towards the dark clouds, and where the voice is echoing from. Soon you are in the midst of a swirling storm, you and your men are drenched, but none seem to care, you are all hypnotized and spellbound with curiosity. A small rocky formation of islands comes in view, and the voice sounds as if it’s right by your ears. You and your men dock and step onto the seemingly unstable terrain and follow the sound.

Rain pours harder now and lightning becomes frequent with loud booms of thunder almost washing out the beckoning voice. Then, in a crevice among rock you think you see something. A figure is revealed when a bolt of lightning torches the sky.

Much like the black widow in nature, the Sirens, derived from Greek mythology are killers and seducers of men. They quell sailors or mariners with a beautiful song, and lure them to their deaths. These harpies of the sea, were originally portrayed as birds with the head of a woman. There were said to be three of them, and they lived on an island called Sirenum scopuli. The area was very rocky and surrounded by cliffs.

The sirens sung absolutely beautifully and most commonly played harps. It is also said that when recognized as a trio, one sang, one played the lyre and the other played the flute. The fact that they are associated with birds is interesting to note because birds are known for the beautiful melodies that they constantly chirp.

These mythological creatures evolved over the years. From humans with the body of a sparrow, into women with seduction not only in their voices, but in their bodies. Later accounts tell of sirens being more mermaid-like, with a most beautiful appearance. But their beauty and their melodies were deceitful. When sailors ventured too close, they would be killed by the Sirens. Some believe that the sirens were actually cannibals, and would eat the curious mariners that were lured by their song.

In Homer’s “The Odyssey” these temptresses really gained notable recognition. On Odysseus’ travel to Ithaca, the sirens tried to lure he and his men, but they were prepared and plugged their ears with wax. Odysseus ordered his men to tie him to the mast of the ship, so that he could listen to their sweet song. He warned them to not untie him no matter what he says. As they passed by the sirens sang:

“Draw near … illustrious Odysseus, flower of the Achaean chivalry, and bring your ship to rest that you may hear our voices. No seaman ever sailed his black ship past this place without listening to the sweet voice that flow from our lips, and none that listened has not been delighted and gone on a wiser man. For we know all that the Achaeans and Trojans sufferer on the broad plain of Troy by the will of the gods, and we have foreknowledge of all that is going to happen on this fruitful earth.”

Although Odysseus did beg his men to untie him, they knew not to oblige. They passed by the sirens and all were unharmed on their journey. It is said that if a siren sings and their call is not heeded, they will die. And so the sirens wings disintegrated and they plunged into the ocean and perished.

A popular phrase coined by our watery sea wench friends is “siren song”. This term infers an offer that is very appealing, but may lead to bad aftermath. This is one example of sirens in today’s culture. The sirens also appear in many video games and in musical reference.

Three horrifying women with feather plastered arms and scaly feet suddenly hovered you and your men. They were the source of the melody that tempted you to stray so far from your current course. The scare of their grotesque appearance completely shocked your hypnosis away, and now it was a matter of how to escape. Your men unsheathe their blades, and swiftly attacked with their swords, but are quickly torn apart by the talons of the creatures. Swords could not piece their armored hides, it was useless. You stared in horror as your men fell in a pile.

You unsheathed your sword as well in one last futile attempt to live to see dawn, and something miraculous happened. As you raised your sword up to the heavens and emitted a hearty battle cry, a bolt of lightning struck your blade and lit up your sword. You immediately reacted and landed a heavy electrified blow, that pierced through all of the sirens simultaneously and burst them into a heap of embers, feathers and bone. You fall backwards and stare up at the sky feeling blessed. You really must have done something that pleased Zeus.