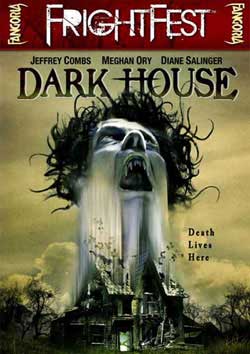 Trying to exorcise her worst memories, Claire (Meghan Ory) returns to the foster home where she witnessed a terrible massacre years ago. Capitalizing on its history, a mysterious showman (Jeffrey Combs) has turned the infamous mansion into a haunted-house attraction. Claire and her friends soon realize that a demonic force has taken over the building and they’ve been locked inside with a malevolent spirit who wants to perpetrate another mass murder.

Haunted attractions are something that people of all ages can look forward to every year come Halloween time. Each haunted attraction vies for the best versus other haunted attractions that are all serving the same purpose: to scare the living daylights out of their victims that decide to enter their doors. This is the case in Darin Scott’s “Dark House,” where a desperate haunted attraction owner experiments in a technology that is breakthrough in the industry, but things go awry when a spirit causes a malfunction within the owner’s plan causing death of the actors and a race for their own survival.

Claire(Meghan Ory) is first shown having a flashback of her childhood, being brave enough to go into an old orphanage in a creepy old house. When Claire enters the home, she discovers a brutal murder scene where the woman in charge of the orphanage Miss Darrode(Diane Salinger) has single handedly annihilated all the children of the house. Claire watches Miss Darrode chop off her hands in the garbage disposal in the kitchen, and then wakes up after passing out in her dream. She is shown next at a psychiatric evaluation, in which she confesses her need to be free of her past so that she can concentrate on her acting classes.

Moving forward to a college campus environment, a small acting class is being taught and soon welcome a guest speaker Walston Rey(Jeffrey Combs.) Walston exclaims to the class his past in being the owner of many infamous haunted attractions, and is interested in the students being actors in his supposed best haunt around. Walston tells the students that they will act at the same house that fourteen years prior the orphanage murder occurred, and Claire instantly agrees to play a part along with the rest of the class.
When the students enter the house, Walston immediately shows them his secret weapon that sets his haunted attraction apart from the rest.

The machine installed in the house is able to project holographic villains that can actually attack the visitors of the haunt. Even though it looks like a person is killed, it is all fantasy as the villain and wounds are all fake. Walston explains to the students that they will be working alongside these holographic fictional actors. The students are in for a big surprise when two reviewers come through to put on a show, and the hologram computer system goes on the fritz. The holograms start attacking the intruders of the home, and Claire leads the group of actors and staff on a fight to save their lives from what they thought was harmless.

Veteran horror actor Jeffrey Combs(Re-Animator, House on Haunted Hill, The Frighteners) showcases the film with his role of the unlucky haunted attraction owner. The spirit of Miss Darode is a vengeful ghost that will not rest, and is awakened with Claire visits the home again. A new slasher in the realm of killers in the horror industry, Darode’s character never meets a spiritual vengeance that opens up a possibility of a sequel in the future. There was plenty of blood and gore to fulfill horror fan needs, however the kills were CGI created and not very realistic in the hands of holographic projections. Even though the 3-D holograms were really innovative in nature, the possibility of the machine showing up in haunts these days is unfathomable in the age of only being able to see 3-D projections through special glasses.

Darin Scott’s “Dark House” is the story of a truly “haunted” house that doesn’t even need the actors and props to make a haunted attraction. In the fight to be the best, a spirit of a crazed killer overtakes hope of success for a budding haunted attraction, causing death and chaos fourteen years after the initial massacre.