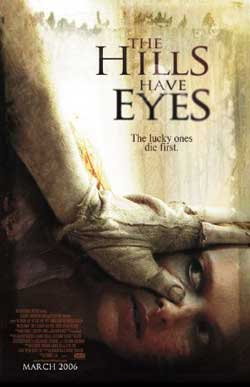 Traveling across the American Southwest en route to California, an unsuspecting suburban family is being tracked by a group of hill dwellers whose social skills have failed to evolve. If their vehicle breaks down, or if they stop to stretch their legs, their vacation could end in tragedy. Kathleen Quinlan, Aaron Stanford, Vinessa Shaw, Emilie de Ravin and Dan Byrd co-star in this remake of the 1977 Wes Craven classic.

I think Hills Have Eyes has broken a record—it’s the first remake that not only kicks the ass of its predecessor, but crucifies it, cuts its intestines out, and lights it on fire, too! “Blasphemy!” you cry? No one can scream that heretical word louder than me when the subject of remakes comes along. I have a deep appreciation of original work. The recent King Kong remake is a great example of this, because I think it’s bullsh*t. My opinion is not a popular one, but I think Peter Jackson just pissed on the original and said “Anything you can do, I can do better!” to Merian C. Cooper’s original film. Luckily, with High Tension director Alexandre Aja’s remake of Hills, this is not the case. Wes Craven’s original Hills Have Eyes was a great idea that somehow came out a bit bland, but now, Papa Aja has come along and made it all better.

First of all, pardon my French, but holy f*cking sh*t. You know that cliché movie critic claim that the movie reviewed is “a roller coaster ride”? Hills is kind of like that, except instead of a roller coaster ride, it’s more like “an airplane trip when the airplane gets struck by lightning and sent into a bed of giant jagged rocks, leaving thousands of passengers impaled or left in puddles of their own gore”. Sound horrible? Hills Have Eyes is, but in the absolute BEST way possible (after all, this is a horror movie).

The film tells a very basic story: The Carters, a typical American family (plus two dogs, one daughter’s husband, and their baby) go on an RV trip, wreck their RV in the middle of a desert, and are horribly hunted down by a pack of radioactively-influenced mutant cannibals. It sounds simple and B-movie-ish on paper, but the new Hills is so much more than that.

What makes Hills so great and sets it apart from the rest of the recent trendy bunch of “let’s be as gory as possible” shockingly mainstream horror movies is that this film actually features impressive character development of the unfortunate family that tangles with the mutant cannibals. Maybe it’s because my family is a lot like that of Carters, but I really felt for these guys.

When I watch a horror movie, I’m usually rooting for the monsters to drag their ass faster to their scan’tily clad victim so they can place her on a meat hook (and trust me, I love watching cool monsters chasing chicks and killing them in unnecessarily gory ways, but there’s a time and a place, too). Somehow, in Hills, when I watched the humans being tortured and maimed and murdered, I felt like I was watching my own family suffer the Carters’ many different unfortunate fates. It hit home hard, and I loved every second of it. As a constant digester of depravity-ridden cinema, I’ve seemingly seen pretty much everything, and I usually miss the feeling of being shocked or depressed by something on the screen, but Jesus Christmas I surprised when I sat down to watch Hills.

I honestly assumed that Hills would be another “fun, kind of disturbing” gore movie, following in the footsteps of Saw, Hostel, Aja’s own High Tension and –insert recent horror film here–. Fortunately, I was completely wrong about Hills—instead it was a deeply suspenseful, truly scary, well-crafted, creative piece of cinema that is, really, the perfect horror film.

The violence in Hills is not of the Friday the 13thvariety, so don’t expect to go into the film admiring the ways the SFX crew splatter Karo syrup. Hills’ violence is repulsively realistic and will probably leave you hurting for a while. While the gore is of course exploitative (exploitation is usually essential for most horror movies), it comes off as emotionally powerful rather than “sweet, dude!”. As an avid viewer of horror films of all shapes and sizes, I can honestly say that this is pretty much a first for me. I felt true emotion from watching Hills Have Eyes, and that, in my eyes, is an indication that the film is more than just entertainment, but real, functional art.

I can’t say enough good things about this film or Alexandre Aja (who I predict will be one of the next big horror directors, and whose name will most likely be alongside George Romero and John Carpenter in “legend” categories in the minds of many—so far, he’s shown me nothing to make me think otherwise). If you haven’t seen Hills yet, stop reading this review and get your ass down to the theater right now. If you have seen it already, you’re probably at the theater right now, watching it for the fourth time anyway. ALL HAIL THE HILLS!