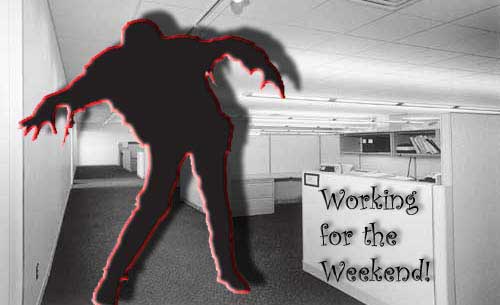 Pitting the all consuming ravenous wandering sensibilities of the office worker against the metaphorical embodiment of their undead doppelgangers is like watching cannibals eating cannibals. I am only left with imagery at this point…picture a sea of identical cubicles, each trying to be unique but intrinsically being the same thing. It is the battle of one thing knowing what it is, and the other, trying to dress like it does. Fight!

The lack of a proper upbringing is obvious in the zombie; their rough around the edges exterior combined with festering open wounds is hard for any kid to deal with. They are like the underdogs that every once in a while will eat a dog. There perseverance in the face of the lack of schooling is endearing if not ridiculously unimportant to what they want to be when they grow up: full of brains.
As for the office worker, any general arts degree or business program can get you functionality in this group. Made up mostly of people who wanted to do something else but never really got around to it, their lack of direction is the main reason why school and cubicles are so important to them; structure within a structure. Who they are has taken a back seat to what they want: lowest common denominator art.
Also, zombies eat brains, office workers usually work for the companies that destroy brains.

The office worker hates what he does and always looks forward to that next big thing. The Nickelback show or Beyoncé’s new album or standing in line for an hour in subzero weather in order to get into some hipster bar … these are their goals.
Old zombie folktales tell stories of human brains being rich with souls, leading most zombies to believe that if they eat the brains of the living, they will retain that living thing’s soul. Sort of like the Ben Mulroney belief that if you suck as bad as possible you create a reverse vortex blinding those around you to your suckitude and leaving them believing your suck isn’t suck at all, but awesomeness. But let me be perfectly clear: I am not comparing zombies to Ben Mulroney. I respect zombies far too much to say that.

The past several decades have seen a resurrection and a reinvention of the zombie archetype. What was once a voodoo-cursed semi-dead guy is now a running, screaming, exploding blood-plague spreader that, if that Dawn of the Dead remake is to be believed, can even gestate a baby. This complex evolution has caused serious debate and, at the same time, an identity crisis on the zombie front. What type of zombie are you? Do you run? Or do you take your time to get those brains? Adult, adolescent, and Marvel superhero zombies alike all have to question who they are and what they do. I think we can all agree: if it were safe to hug a zombie, we would.
The office worker was never really anything but an office worker. But hey, Office Space isn’t bad.

AND THE WINNER IS…

When zombies and office workers meet on the final battlefield before the End of Days, there will be carnage like never before. Sure, zombies are hard to kill, sometimes ridiculously fast, and have a pain threshold equivalent to a meth addict’s entire family.  But what zombie defenders forget is that inside each office worker there is an empty place. A place that used to hold their dreams and their futures. The rapture, the hate, the pure, seething rage pent up in each of these beings is immeasurable. The Office Worker Apocalypse will make God Himself whimper with fear because He knows that when the office workers win, everyone else on the planet, whether alive or undead, will pay for their sorrow. I’d rather give up my brain than be a part of that pity party. Sorry, zombies.