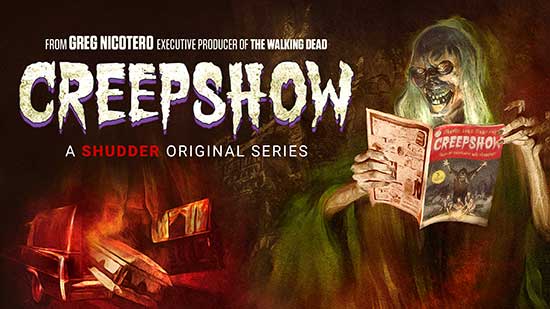 Season two of Shudder’s record-breaking anthology series Creepshow, executive produced by showrunner Greg Nicotero (The Walking Dead), premieres Thursday, April 1, exclusively on Shudder in all its territories, as well as via the Shudder offering within the AMC+ bundle.

Creepshow, the highly-anticipated anthology series based on the 1982 horror comedy classic, is still the most fun you’ll ever have being scared! A comic book comes to life in a series of vignettes, exploring terrors ranging from murder, creatures, monsters, and delusions to the supernatural and unexplainable. You never know what will be on the next page…

Joe doesn’t have many friends, but he’s happy to hang out with the model toys of his favorite scary movie monsters… and he’ll learn just how supportive his toy friends can be.

PUBLIC TELEVISION OF THE DEAD

A Public TV station and its happy daytime TV hosts are overwhelmed when the appraisal of an antique book accidentally summons a dark force.

DEAD & BREAKFAST
When a true crime travel vlogger documents her stay at a hokey haunted Bed and Breakfast, she gets a much scarier experience than she was expecting.

An exterminator is tasked with a big job, and it’s more than he bargained for. The payout is huge, but is it worth what it’s costing him?