One of the great powers of horror movies is atmosphere; setting the right mood can be a crucial part of selling the scare. Because of that, much of these movies take place at night or in darkness. I am a firm believer that something is one million times scarier if you can see it in full, hard light. So: the greatest deaths that don’t happen in darkness. Also: many, many thanks to the incredible Greg Doom, whose help compiling this list proved invaluable.

1- The Birds (1963)
This movie scared the crap out of my mother when she was a kid, but it’s really not that scary. It’s unique, for sure, and swarming insects/animals are scary, but overall… eh. This movie just isn’t up to par with Hitchcock’s other films. It does, however, have a pretty awesome death, shown in daylight: that guy who gets pecked to death right outside the telephone booth that Melanie (Tippi Daniels) is hiding in. Just imagine getting pecked to death. Yeah. It’s horrible; plus, the sound of those birds screeching and hitting the glass is awful. 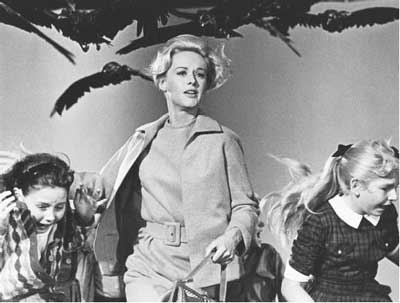 2- Day of the Dead (1985)
A guy getting ripped apart by zombies—pretty standard. A guy getting ripped in half by zombies in full light—a little more interesting. A guy getting ripped in half by zombies, shown in full light, entrails flying, everything from the waist down dragged away by the ravenous undead—now that’s awesome. This may be the best death in Romero’s series, just because of the amount of gore and subtext: Rhodes is shot by Bub, a zombie with limited intelligence (hey, he can work a gun), but it’s not just a lucky shot. Bub meant to shoot Rhodes, who’d angered him before. So, in typical Romero fashion, the underlings of society are rising up and taking revenge against their oppressors. And, worst of all, Rhodes’ cries of “Choke on ‘em!” as he watches the zombies devour his lower half are fruitless because it’s his own mistakes that are eating him. 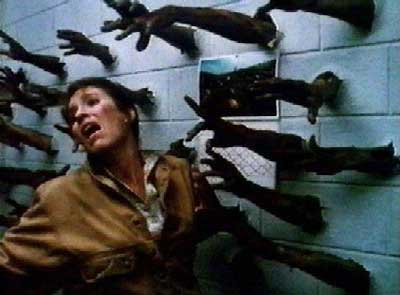 3- The Last Horror Movie (2003)
This is similar to another death on the list, but in method only. The purpose is also different (well, other than intending for someone to die). This clip, which, brilliantly, is one continuous shot, follows our killer, Max Parry, who’s videotaping his murders, down the stairs of an ordinary house. He turns the corner and we see a woman in the kitchen making herself some tea. Before she has any time to react, Max stabs her repeatedly in the stomach. What makes this particularly dreadful is that afterward Max tries to impress on her the importance of what he’s doing—he tries to explain to her why he’s killed her and he wants her to respond. It is, perhaps, the scene that best illustrates the bigger themes of the entire movie. 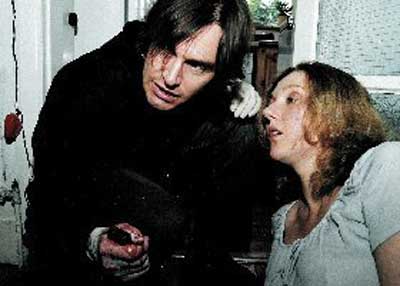 4- The Final Destination (2009)
Say what you will about the series, or the fact that this movie was in 3-D, but you can’t tell me that some of the deaths in the Final Destination series are brilliant. I wanted to put the car wash scene on this list, because we’ve all felt trapped while locked in the car and propelled down that track, but the girl didn’t die. A lot of people did die during the racetrack flash forward-dream-prophecy-vision. A girl getting her head popped off by a flying tire? That’s the kind of thing you go to a horror movie to see. 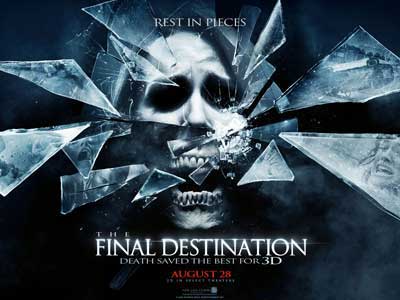 5- Snakes on a Plane (2006)
Two taglines from this film which is, arguably, the best film ever: “Sit Back. Relax. Enjoy the Fright.” and “Airline food ain’t what you gotta worry about.” The brilliance just oozes off your screen, doesn’t it? This entire movie is just one big death scene, shown in full light, so take your pick as to the best one, although the bathroom scene is what everyone always talks about (I also vote for that annoying yapper getting thrown into the pit).

6- Cabin Fever (2002)
Really, your friend is just sick. They just need a doctor. You know this. But you also know they’re flesh is rotting and they are going to infect you. Sorry: the BFF’s got to die. Eli didn’t skimp on the blood with this one, and while the leg shaving scene made every woman’s skin crawl, the worst part of this movie is when Ryder Strong takes a shovel to Jordan Ladd, who he’s in love with and whose face is half gone. 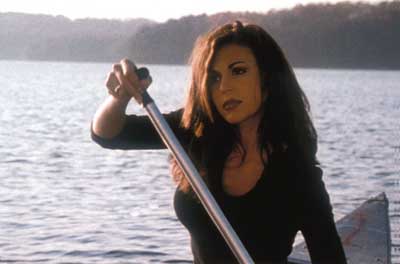 7- Creepshow (1982)
Stephen King got together with George Romero and made an episodic horror film. The fact that it’s awesome is a given, right? Yeah, well, it also has one of the best death scenes ever, shown in full light: a miserly germophobe’s apartment is taken over by cockroaches, which then take over his body and rip his body apart as they crawl out. OH. NO.

8- Army of Darkness (1992)
I’ve talked about how much I love Bruce Campbell, right? And how Ash is the greatest horror hero ever? I have? OK, good. I’m sure you agree with me. And, oh, how pleased I was when I remembered that the first half of Army of Darkness takes place during the day. You know the scene I’ll list here: Ash in the pit, with the spikes, his chainsaw flung down to him (which, badass he is, attaches to his own wrist in midair), and then, after he emerges, kills that monster thing with the Boomstick. Awesome, awesome, awesome, awesome. I heart Bruce Campbell. 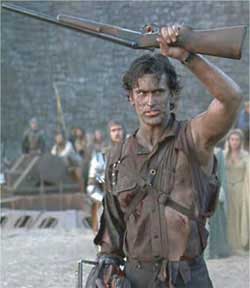 9- Frankenstein (1931)
Who gets killed during the day? The little girl the Creature plays with; she drowns after he throws her in the lake they were tossing flowers into. Now, I know what you’re going to say, and here’s my response: We don’t really see it, but we see right before and right after, so I’m counting it. And what makes it one of the greatest is that we know he didn’t mean to kill her. We feel for the Creature, but we also feel for the father whose daughter has just drowned, and understand why the villagers get upset. This movie is exceptional all-around and this is part of the reason: we get it from all sides. 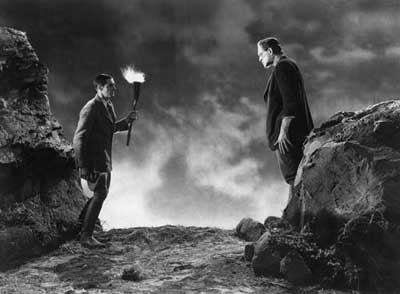 10- Pet Sematary (1989)
A toddler runs out into the street to retrieve the string for his kite and gets hit by a semi. I get all freaked out and weepy just thinking about it. This one is brutal. 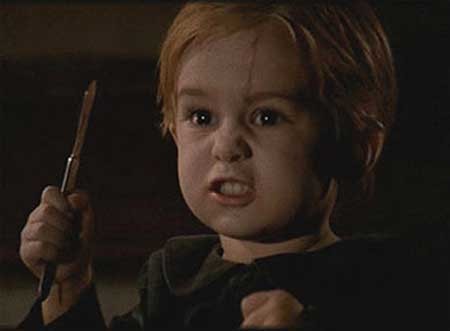 11- The Omen (1976)
Did they just decapitate David Warner? Yes, yes they did. And you get to see it all—from three different angles. And it’s awesome. Just think: this was back in ’76; no CGI or even really good prosthetics then. It was actually the first decapitation on film. One for the history books, folks. 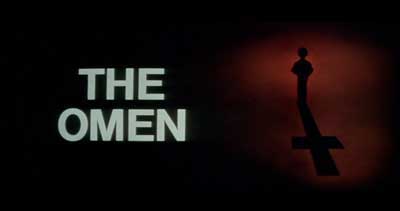 12- Jaws (1975)
You think Hooper’s going to get it when he’s in the shark cage underwater, but no (by the way: who thought that was a good idea?!). Nope. Instead it’s Quint, the coolest person in the film, who gets bitten by the big one. Aside from how graphic and unexpected this death is, it also puts the viewer in quite the awkward place because Hooper’s a wimp, and we’re not sure if Brody can pull it out. Will they defeat the shark? Chum’s the word. 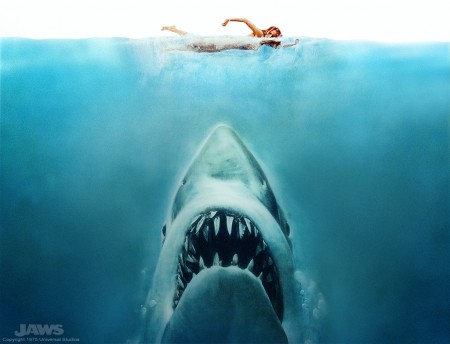 13- The Last House on the Left (1972)
Phyllis is seventeen. She is dying. Why? Because three psychos just eviscerated her on camera, out in the woods on what appears to be a beautiful, sun-shiny day. THIS. IS. THE. WORST. This is the mother of all death scenes shown in hard light. No wonder Wes Craven is hailed as a genius. (Side note: he was an English professor before jumping into directing. Bonus points for all English majors and horror writers! Which, wouldn’t you know it, I am!) In terms of gore, in terms of violence, in terms of audience participation and identification with the victim, in terms of everything, this is the one to beat, and no one’s done it yet.