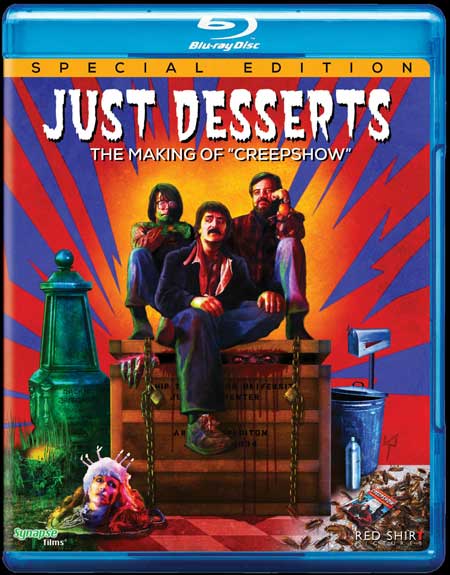 Details the making of Stephen King & George A. Romero’s 1982 horror anthology classic, from conception through to completion.

The July 2016 North American blu-ray release of Just Desserts: The Making of ‘Creepshow’, filmmaker Michael Felsher’s feature-length chronicle of the creation of the classic 1982 anthology film, was, and is, cause for celebration for fans of director George A. Romero and screenwriter Stephen King’s tribute to the lurid EC horror comics of their youth. This “special edition” package, distributed by cult/horror purveyors Synapse Films, has been loaded with some surprisingly meaty bonus content, making it a near-definitive account of the beloved fright flick’s production and the top-notch work of its talented creative team. For those who already own Warner Home Video’s blu-ray release of Creepshow, which, besides a trailer, features no supplemental content at all, the Just Desserts special edition blu-ray is an essential companion piece. 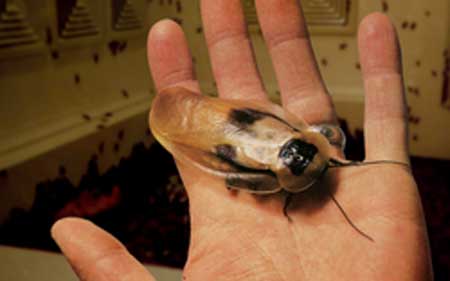 Michael Felsher – who, under his Red Shirt Pictures banner, has provided a wealth of documentary and interview content for dozens of (mostly horror) DVD and blu-ray releases for various distributors, including a number of excellent Scream Factory titles – originally produced the Just Desserts feature as part of the supplementary material for the 2007 ‘region 2’ UK release of the 2-disc ‘Special Edition’ DVD of Creepshow (for which Universal held UK distribution rights), after Warner showed zero interest in any bonus content for a US DVD. In 2013, Second Sight Films released a UK-only ‘region B’ blu-ray edition of Creepshow, porting over all the bonus content from Universal’s UK DVD, while Felsher provided a fresh round of new interview content to create an even more attractive package. Synapse’s 2016 stand-alone release of Just Desserts includes most of the additional 2007/2013 UK bonus content, while adding several new, and quite substantial, features of its own.

The centerpiece of this release remains the Just Desserts documentary itself. Clocking in at a generous 90 minutes, and shot with a nicely consistent visual style by Graeme Potts, the well-structured film covers seemingly every aspect of Creepshow’s production, starting from before its actual inception (Romero recounts his initial meeting with Stephen King in the late ‘70s to discuss a film adaptation of Salem’s Lot) to its release, and its continuing impact decades later. Director/producer/editor Felsher devotes entire thematic chapters of his film to such topics as the inspiration and influence of 1950s EC horror comics on Romero and King during their development of the project, the sprawling cast (Romero’s first featuring so many Hollywood professionals), the look of the film, including Michael Gornick’s cinematography and Cletus Anderson’s production design, and special make-up effects guru Tom Savini’s work, taking the time to focus on each of the monster-maker’s iconic creations for the project. A true highlight is Felsher’s extended segment devoted entirely to the challenges of dealing with the thousands of live cockroaches required for the film’s notorious “They’re Creeping Up on You” episode. Nearly everyone interviewed, from Romero and Savini to the actors to script supervisors and grips, has a vivid, often revolting, and always hilarious roach story or two.

The documentary winds down with sections covering post-production graphics and John Harrison’s score, along with the film’s theatrical release (it remains Romero’s only film to hit number one at the box office), and a wrap-up with everyone looking back on the film’s (at the time) 25-year legacy. All the participants appear good-natured and game for detailed discussion, apart from the vaguely dour Ed Harris, who seems a touch surly even when he’s joking (though it is indeed remarkable that he was persuaded to participate at all).

Felsher is obviously an enthusiastic fan of the film and its creators, and clearly knew the right questions and prompts to jar loose the best memories from his interview subjects. While Felsher himself laments in one of the included commentaries that he still regrets the lack of Stephen King’s involvement (the author steadfastly declined to participate in the project, even after the urging of his old buddy Romero), and the novelist would have certainly provided a unique perspective, Just Desserts, as it is, remains the as-close-to-definitive-as-possible statement on the making of a horror classic.

This “special edition” release also includes a commentary track consisting of three interviews (with actor John Amplas, property master Bruce Alan Miller, and Savini’s sole make-up effects assistant on the film, Darryl Ferrucci) conducted after the 2007 documentary had been completed (originally included as bonus content on the 2013 UK blu-ray, and slightly re-edited here. Note that at the conclusion of the three audio interviews, there’s a bit of an “Easter egg”: after his farewell to viewers, and 15 seconds of silence, Michael Felsher comes back to document all the places in the film that the large marble ashtray – used initially to bash in the skull of Nathan Grantham in Creepshow’s first segment – shows up in all the subsequent episodes, a running joke perpetrated by the filmmakers.)  There’s an additional, brand new optional audio track on the documentary which may actually be a first – a “director’s commentary” by the director of the “making of” film itself. Felsher’s tales of the long road of getting the low-budget but comprehensive chronicle made, and eventually released in North America nearly a full decade later, are more entertaining and engrossing than one has any right to expect. 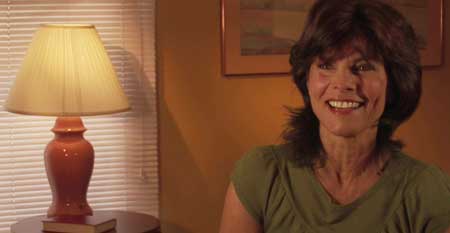 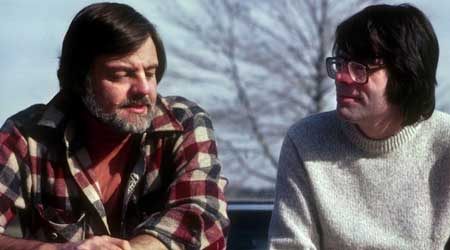 Director of Photography Michael Gornick, who was originally included in the 2013 UK blu-ray’s audio commentary bonus interviews, has his 21-minute chat from that set edited down here to a brisk seven minutes, though it nicely appears on this release as an on-camera piece, and includes the essential content of his recollections. There’s also 24 minutes’ worth of newly included extended video interviews (taken from the 2007 documentary shoot) with the always engaging Romero and Savini, along with horror/comics artist Bernie Wrightson (who provided the art for Creepshow’s 1982 comic book tie-in), whose footage appeared only briefly in the finished 2007 film.

Horror convention staple Sean Clark provides a recent, Creepshow-focused episode of his movie location docu-series Horror’s Hallowed Grounds, which, while running a short 15 minutes (Clark doesn’t get interior access to many places here, as is often the case with the guerrilla-style shooting of his series), does feature an enjoyable new interview with actor and genre favorite Tom Atkins, conducted right in the front yard of the still-standing, nearly unchanged house from Creepshow’s opening/closing wrap-around segment.

New to this release as well, Felsher somehow exhumes an October 1982 segment of Pittsburgh’s local version of the syndicated “news magazine” program Evening Magazine, with seven minutes devoted to on-set cast and crew interviews, and a predictable focus on the infamous cockroaches. It’s a real slice of early ‘80s style “info-tainment,” complete with an overly chipper, grinning host. 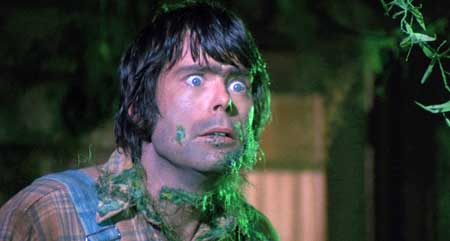 There’s a lavish photo gallery, ported over from the UK DVD and blu-ray, of nearly 100 color and black & white images (auto-playing for eight minutes, each shot remains on screen for an easy-to-pause-if-necessary five seconds), covering every aspect of the production, from candid snaps to promotional stills, and featuring lots of close-up views of Savini’s gruesome and inventive work (including a few pics of the results of the shotgun blast to the face of “Yarbro” – Aunt Bedelia’s flashback-scene suitor in the “Father’s Day” segment – a grisly make-up effect which was cut from the final edit of the film). Also retained from the UK releases, and great fun, is the 26-minute compilation of Tom Savini’s “Behind the Screams” personal video footage, a treasure trove of alternate angles and unused takes of several of the effects sequences, in watchable (if expectedly less-than-HD) 1980s home video quality.

On the subject of Mr. Savini, who turns up quite often over the course of this package and its bountiful extras, there is one more newly-included bonus feature, and for longtime fans of the rock-star-like make-up effects artist/actor/director/stuntman, it may be the best part of the whole set. Finally, after languishing on out-of-print VHS/laserdisc for decades (with an extremely limited 2010 ‘region 2’ DVD release included only as a bonus feature with Arrow’s now-out-of-print 3-disc ‘region B’ UK blu-ray of Dawn of the Dead), the lengthily-titled 1986 video documentary, Scream Greats Volume One: Tom Savini, Master of Horror Effects (the debut release of the ill-fated “Fangoria Video Magazine Series,” which lasted only as far as “Volume Two”) is now available on North American blu-ray. All glorious 53 minutes of it are here, in probably the best quality a mid-‘80s shot-on-video production will ever see, which is to say it’s on the order of a very good VHS copy, perhaps taken from the old Paramount laserdisc release. For anyone who hasn’t seen this gem, not only will it make you want to become a 1980s make-up effects artist, it’ll make you want to become Savini himself, who comes off as the coolest guy on the planet – or in Pittsburgh, at least.

This long-form video was originally released at the height of Savini’s popular cult-hero status, an era when he was mentioned or pictured in nearly every issue of Fangoria, and was appearing on David Letterman’s late night NBC talk show every few months. Future make-up effects hall-of-famer Greg Nicotero – “Mr. Walking Dead” himself – looking all of about 12 years old (though 22 at the time) appears throughout the video as well. Shot just after Savini and crew (including Nicotero) had completed work on Romero’s Day of the Dead, the program includes an abundance of home video footage covering their then-recent achievements in state-of-the-art make-up effects carnage on the set of the 1985 zombie epic, as well as similar behind-the-scenes material from most of Savini’s career, a good portion devoted to Creepshow.

Better still, as an additional option for the Scream Greats feature, Felsher sits down with Savini for yet another new (recorded in 2015), full-length, scene-specific audio commentary, and while they reflect on the 1986 video doc, they also discuss Savini’s life and career over the three decades since, the conversation becoming remarkably unguarded at times; one comes away feeling as though they know Savini personally after listening to this absorbing track. Bravo to Mr. Felsher’s Red Shirt Pictures, and to Synapse Films, for finally making this Savini classic widely available, and even throwing in a worthwhile, brand new commentary on top of it.

For those without access to a multi-region blu-ray player, pairing this chock-full “special edition” release of Just Desserts with Warner’s US blu-ray of Creepshow is a no-brainer, and essential for any horror fan. The only materials missing from this over-stuffed new package that were included as supplements on the UK ‘region B’ blu-ray are the Felsher-moderated Romero/Savini audio commentary track which is specific to the Creepshow film itself, and the presumably studio-owned footage: the trailer, TV spots, and 15 minutes of outtakes.

Super-fan Felsher’s well-crafted account of the making of Romero’s horror classic captures the camaraderie, fun, hard work and pride shared by all involved in the film’s creation. Despite the “Hollywood big-time” feel of Creepshow’s production – the West Coast actors, slightly larger budget, and eventual studio distribution – it’s clear in the humorous, engaging, and often wistful stories recounted here that it remained very much an old-school, independent, Pittsburgh undertaking, with Romero’s family-like crew at his side, perhaps the last time the work of filmmaking unfolded so perfectly and pleasantly for the veteran director. Creepshow will always stand as one of Romero’s finest film achievements, and for its many fans, Just Desserts: The Making of ‘Creepshow’ should stand right alongside it.