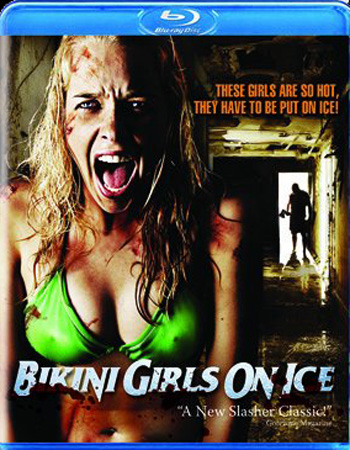 When a bus-load of womens college soccer players get stranded on their way to a bikini car-wash fundraiser, they decide to set-up shop in front of an abandoned gas station on the edge of town. Little do they know the place is the stalking-grounds for a homicidal maniac mechanic named Moe.

Ah yes, “Bikini Girls on Ice”, an incredibly clever title that arouses interest in every heterosexual male. A title that brings forth images, at lease for me, of voluptuous women in itsy bitsy teenie weenie bikinis skating across the ice in various, shall we say, seductive and inviting positions that invoke thoughts of being able to fulfill every fantasy imaginable. Unfortunately, this isn’t the case, those are just delusions inside my twisted mind. “Bikini Girls on Ice” is a “by the numbers” slasher that doesn’t really offer up anything new but does manage to entertain on a basic level and does deliver on its promise of bikini girls, which it delivers in spades, but really doesn’t deliver much else.

A group of college co-eds are on their way to a bikini car wash fundraiser when their bus breaks down in the middle of nowhere. So, in an attempt to make the best of the situation, they decide to have their car wash where they are, an abandoned gas station. Things seem to be working themselves out and bikini girls come and go until the town crazy pulls up and warns them of people disappearing. The girls and the couple of guys they brought along, find themselves the prey of a homicidal maniac that collects bikinis’ and keeps his bodies on ice.

Sounds fun and it sounds like a comedy. To its’ credit, the film plays itself straight and tries to be a scare fest in the vein of “Texas Chainsaw Massacre” or “Halloween”. That just didn’t work for me and the films killer, Moe (William Jarand) is not frightening or menacing. He spends most of his time grunting and c**king his head like a dog. Moe just shows up and kills, no back story, no motivation.

That was a major part of why the film just didn’t work for me in that respect. He kills without mercy and the deaths mostly occur off-screen. There isn’t much for the gorehounds to relish in, a tiny splash of blood here and there, everything else is left to the imagination of the viewer. Not to mention the fact that there are plot points that are introduced and never explained, things that could have added something of interest to the story.

With a title like “Bikini Girls on Ice”, the film took itself much too seriously. I don’t think it should have been a parody or anything like that, just had a bit more fun playing with the bikini girls and their situation. It’s fun, just lacking in the much needed humor department.

There’s a great rock song that plays during the end credits called “Heroes are Forever” by a band called Crazy Lixx. It has a Dokken like vibe and is silly and fun at the same time. That is the tone the film should have aimed for instead of trying too hard to be serious.
The film has a slick look and director Geoff Klein knew how to make the most of his locations. I was really impressed with the look, lighting, editing, and technical proficiency of the crew. It is apparent that whatever money they did have went into that area, making that worth a view alone. And even after all my bitching and complaining about, I will still recommend the film.

Even though you will see everything coming, there are no surprises, the acting is passable, the movie still remains fun enough for a view, maybe even two. One time to watch it, judge it, and acknowledge the fact that the film is a great example of how a low budget film can look great, and a second time to admire all the lovely young ladies that spend the majority of the film in those lovely little bikinis. These ladies are beautiful and most were solid actresses. Yes, I was able to focus on their talents and not their assets, at least the second time through. Check it out.