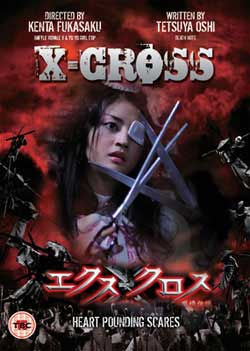 A pair of beautiful young girls (Matsush*ta Nao, Suzuki Ami) finds themselves in the fight of their lives when a trip to a hot springs resort lands them in the middle of a remote village, where bloodthirsty maniacs carry out a terrifying tradition. Based on the spine-tingling novel by Nobuyuki Joko, this fast and funny horror-thriller is directed by cult film auteur Kenta Fukasaku (Battle Royale II).

X-cross is nice change of pace for everything I’ve seen up to now from the Asian sector. My first impression was that it would be another Tokyo Gore kind of film (of which I confess to really liking) though it’s a bit more complex than that and less over the top. The interesting thing about films like this is that they combine so many directions and smash them together like a fine baked pie. X-cross which uses a bit of cool technical editing uses a technique that spins back and forth thru time to bring us the viewers into perspective happenings at that moment.

Because of this we get alot of back and forth nonlinear sequences. Though it’s not to the effect of being confusing as the sequences often overlap previous events almost like a parallel dimension or perspective. This technique happens throughout to connect the dots of all the things going on at once. The surprise is that many of the assumptions turn out to be quite different than the assumed first encounters. Per way of cell phones, the phones themselves connect the narratives into a visual dynamic sort of cinematic playground. Now if that doesn’t make much sense, it will.

The destination is called Ashikari village which is a quaint little village that used to be occupied mainly with loggers. Two friends, Aiko and Shiyori head out on a getaway in the forest to the village Inn that promises tranquility and relaxation. Greeted by a rather ugly and eccentrically demented woman they stay within the lodge and are treated to a few of the village pleasures. All seems to be going well. That is accept for the oddly placed crucifixed scarecrows they encounter on the way in.

It doesn’t take long for the village to rear its ugly head and go wac kjob on the 2 visitors. A village disguised as a getaway is a front for an old traditional that sacrifices traveling women to there god for the promise of a season without bad weather. The tradition is especially fond of legs which they lop off to keep the women from running away from the village. This little aspect is explained in greater detail from an old ways style of doing things that the men used to keep there wives in check. In a sense this village is a bit of a cult.

One of the dynamic and yet star attractions comes from the appearance of Reiko a really odd asian girl who changes clothes more times than I can count. At first she appears as a goth and then a later as a almost a innocent retro sunday school Little bo peep type of character. Though her oddity comes in the way of scissors which she carries around to inflict on others. “Snip snip”, she mutters as she lunges for Aiko in an effort to avenge her current state of being without her previous boyfriend stolen by Aiko. A comedic and violent exchange goes back and forth between the 2 that echo’s the old school asian way of doing things. Loud, crazy and wacky.

Reiko also seems to be above death as she is constantly overthrown, brutally killed and then remerged in a slightly more damaged state. Later within the film her pair of scissors is exchanged for a more absurdly large pair that she swings around marital arts style. I kept thinking back to that pyramid head guy form “Silent Hill” who shared a similar approach.

Well it’s safe to say at one point the back and forth approach does get a bit confusing with the mix of characters but it does manage to even itself out by not overlooking anything.

There are a few parts where you just kind of roll your eyes at how dumb things are, but I found the strength to overlook them. In the 3rd act Aiko wards off angry villagers by flashing her camera…..right! Also they seem to be fast until they are in close proximity in which suddenly they are clumsy….so these kind of things are a bit quirky for intelligent thinkers.

The film is fun, smart and different. I found the story to be original and still entertain with some off the wall inclusions. We are a bit tired of the old crazies in the woods scenario, but I didn’t get that same feeling I expected from other films that deem derivative. X-cross may not be a favorite but it is worth viewing and is a pretty good time. The snip snip girl will be long remembered after the fact as a key icon presence in the movie. 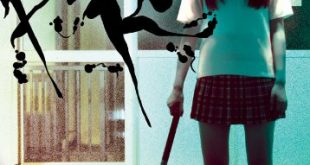