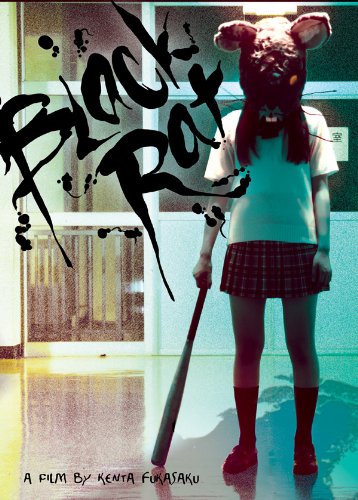 A group of high school students whose friend committed suicide after they treated her cruelly. Months later, they receive letters asking them to come to the school one night. After they arrive, they’re met by a girl in a rat mask who tells them she is going to kill them all. Is it their dead friend out for revenge?

Kenta Fukasaku has had an interesting career as a director. It was a highly publicized start when he took over directing duties on “Battle Royale II” when his father, Kinji Fukasaku, had lost his battle with cancer and passed away. While nowhere near as powerful as the first film, Kenta still managed to pull together an entertaining work. He next moved on to “Yo Yo Girl Cop”, though slightly uneven, was an awful lot of fun to watch. Though I have yet to see his other genre film “X-Cross”, he has returned to the horror pool with the film “Black Rat”. Short and sweet, Fukasaku manages to take what was almost a standard slasher, then throwing in a couple of curve balls that I didn’t see coming.

There is a group of six friends who all receive an e-mail from Asuka who they believed had committed suicide, asking them to meet in their classroom at 1:00am. When they show up they are greeted by a girl in a rat mask. It becomes apparent that she is out for blood. Communicating with flash cards, she lets each of them know why she is coming after them and we learn the truth behind her actions through the use of flashbacks.

The film wastes no time getting started and we are thrust into the story immediately. As each of our characters show up for their late night meeting, we know we are in for a dark ride. The rat mask that was used was the perfect balance of the ridiculous and scary. We learn that Asuka was planning a dance based on a story about the Seven Rats. Each friend would embody one of the seven. None of the friends really want to do but agree. Asuka is a sweet girl, she is always smiling and never mean. Her friends begin to hold those qualities against her. The fun starts when the killer or ghost of Asuka claims to want vengeance. She likes to play games with her victims and allows them a chance to live if they can win the challenge that she gives them.

At first I wasn’t sure if starting things right away was going to work but the use of flashbacks worked perfectly to fill you in on the scenario, allowing us to learn just enough about each character, and the circumstances in which they found themselves becoming a victim. The story itself was just another variation on the slasher formula we have come to know. The first one that comes to mind was “Terror Train” or even “Prom Night”. “Black Rat” manages to surprise in the final act. I won’t give anything away but there were several twists that really threw off my assessment and made me appreciate the film much more. During the flashbacks, we really do grow fond of Asuka and her kind spirit. And her “so-called” friends were just cruel. Not hazing cruel, but a subtle type of cruel which may even be worse coming from the people that you love.

If I had a complaint about the film was the lack of gore. In that sense it plays out a bit more like the classic slashers that show less and leave more to the imagination. There was nothing wrong with it, I was just in the mood for some guts with my blood that day.

Kenta Fukasaku may not exactly be following in his father’s footsteps. His path just seems to be different which is great in my opinion. He isn’t trying to be his father, instead he is trying to carve out his own niche and he is doing a pretty good job. “Black Rat” is a fun slasher with a twist. The acting is above average and Fukasku’s own personal style is emerging. Who would have thought that a girl in a schoolgirl outfit wearing a rat mask would be creepy. I enjoyed seeing it and I think you will too. 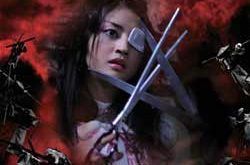