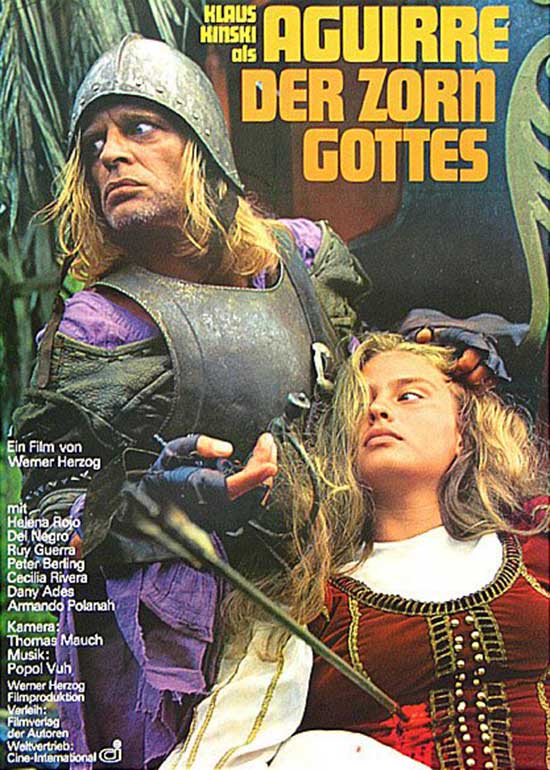 In the year 1560 a group of Spanish conquistadors, fresh from conquering the Inca empire, descend the Andes mountains to the Amazon River. Their leader Gonzalo Pizarro has been charged with finding the mythical city of El Dorado. With supplies running low he orders a small band, led by Don Pedro de Ursua, to traverse the Amazon on a scouting mission. Once they are downriver Urusa’s second in command, Don Lope de Aguirre, seizes control. His scheme is to find El Dorado and crown himself king.

It’s arthouse time here at Horrornews.net. But don’t panic, because this is a Werner Herzog arthouse film that treads the line between Joseph Conrad’s Heart of Darkness and Umberto Lenzi’s Cannibal Holocaust. Aguirre, the Wrath of God is fraught with mysticism, brutality, megalomania, incest and religious ecstasy—nouns that could easily describe a weekend with Aguirre’s star, the late Klaus Kinski.

Aguirre was the maiden collaboration between Kinski and German director Werner Herzog. Their partnership became the European equivalent of DeNiro and Scorsese, with the caveat that the American duo never pulled guns on each other. It was a stormy, occasionally violent relationship, chronicled in Herzog’s 1999 documentary My Best Fiend.

Herzog chose to shoot Aguirre in sequence over the course of five weeks on the Peruvian amazon. The production became an endurance test for all involved, with the onscreen characters’ physical and mental deterioration mirroring that of the cast and crew. The production’s limited technical equipment was slogged through jungles or floated down treacherous rapids on log rafts. The food was bad, the terrain inhospitable, and everyone involved lived on one of the film’s rafts. This cinematic Donner Party was made even more challenging by Kinski’s maniacal temper. We’re not talking Christian Bale venomously throwing a down a few dozen f-bombs here—Kinski was genuinely dangerous, physically threatening the crew and, during an epic tirade, shooting an extra’s finger off.

The trials and tribulations of Aguirre’s production are the stuff of legend, but those challenges also contribute to its magnificence. It’s a textbook example of limited resources and personal hardship enhancing a work of art. If produced today the jungle scenes would be given the full Hollywood treatment, with banks of fog machines, tinted color timing and CGI enhancements. But in Aguirre the rain forest is presented in its raw majesty—beautiful, cruel and unforgiving. The jungle’s native tribes are rarely glimpsed, primarily represented by echoing choruses from the river banks, punctuated by flying arrows. They are an organic part of a world that refuses to be tamed. 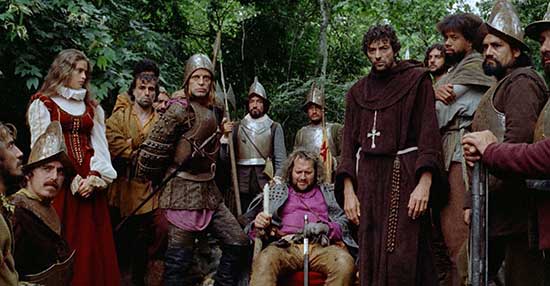 In contrast, the film’s main characters are anything but organic. They are Spanish conquistadors, fresh from destroying the Inca Empire. This small army hikes down the Andes into the Amazon rain forest wearing cumbersome steel armor, while native slaves carry their wives and daughters in velvet sedan chairs. Their absurd mission is to locate the mythical golden city of El Dorado, while still finding time to brutalize the natives under the guise of converting them to Christianity. They are as alien to this jungle world as any science fiction movie’s extraterrestrials.

Among the conquistadors is Kinski’s Don Lope de Aguirre, second in command to the group’s military leader Don Pedro de Ursua (Ruy Guerra). Initially Aguirre seems the most pragmatic of the group—a voice of reason. But it quickly becomes apparent that he’s a megalomaniac with delusions of godhood, obsessed with his young daughter (Cecilia Rivera). His scheme to discover El Dorado and crown himself king dooms every member of his band.

And, speaking of delusions of godhood, lets dive into Klaus Kinski. For those who only know Kinski from B-horror movies and spaghetti westerns, Aguirre will be a revelation. He is nothing short of amazing. His posture, body language and intensity turn every shot of him into a study of brooding madness. He also shines in the film’s quiet moments, such as when he presents his daughter with a tiny animal as a pet.

You would think this hellish production experience would have been enough for one lifetime, but Herzog and Kinski returned to the Amazon for 1982’s Fitzcarraldo. Aguirre was just a warmup for the insanity surrounding that film.

In closing let me say that Aguirre, the Wrath of God is mesmerizing. You can catch it on Amazon Prime. I recommend finding the film’s haunting soundtrack on YouTube, to bask in for a while before viewing. It will enhance the experience.