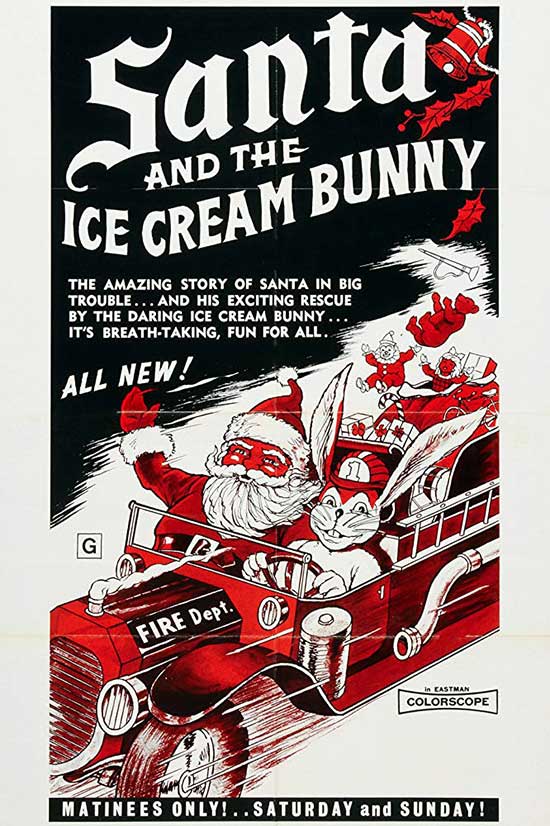 When Santa’s sleigh gets stuck in Florida, he tells a group of kids the story of Thumbelina.

If there was ever an act that can be seen as wanton cruelty, it’s making someone watch Santa and the Ice Cream Bunny. After the misery I endured when I had to review Little Red Riding Hood and the Monsters, I was thinking that the head honchos here wouldn’t be demented enough to make me watch another poorly made musical made for children. Perhaps that belief was a hope, but it was a false hope. Once the movie was finally over, it took my wife a while to start talking to me again, and even longer for my dogs to stop acting like they were ashamed to be seen with me. I think this movie made me snap a little, so if this review is a little snarkier than usual, you’ll know why. 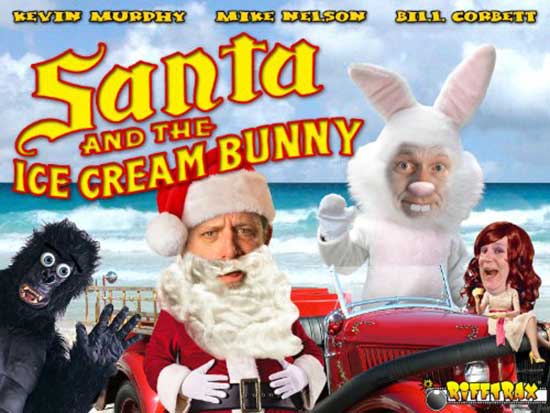 I’m also warning you now, I’m going to spoil the crap out of this movie. I don’t think anyone should see this film, so I’m trying to save you here.

The movie begins with a bunch of children poorly dressed up to look like elves lamenting the fact that Santa Claus can’t be found. Their anxiety is amplified by the fact that it’s the day before Christmas. While they whine about his absence, we drop in on Santa, who managed to get his sleigh stuck in a sand dune in Florida. Now, why was Santa in Florida? I don’t remember an explanation being given, so all I know is the old guy was visiting Robert Kraft’s favorite massage parlor. (From what I understand, it’s very popular with elderly guys.)

Unable to extract the sleigh from the sand, Santa’s reindeer ditch him once it got to hot for them. Not sure what it really says about the guy when he can’t get an ounce of loyalty from his pets. Anyways, while he’s stuck there, he uses his vast magical power to call children and a few adults to his aid. Unfortunately, they appear to be very stupid people since they keep trying things like using farm animals to try to free the sleigh. (Like a single sheep will accomplish what 8 magical reindeer can’t). Anyways, things don’t work out, so Santa decides he needs to pad the movie’s run ti… I mean tell the children the story of Thumbelina. 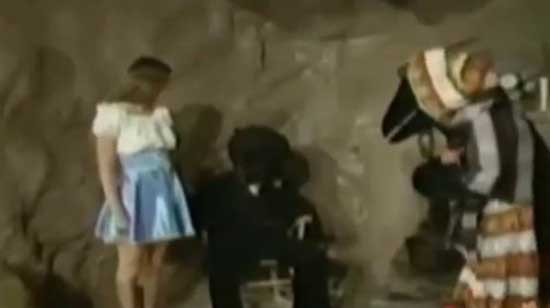 At this point, the audience is forced to watch a story that is annoying and absolutely pointless. To summarize the plot, Thumbelina is born, ends up being half the size of a Barbie when she grows up, nearly gets kidnapped by a frog, nearly marries a mole, then gets flown to an area where she meets Tom Thumb and decides to marry him. If this story had a message or anything that may have related to Santa’s predicament in Florida, it would have made sense to include this part of the film. Since it doesn’t, it comes across as just an effort to add something to make this miserable experience the length of a real movie.

Once the film returns to Santa, I’ve already grown tired of the crappy songs, horrible acting, and the even worse audio. Oh, yeah, the audio. Did I mention how there was an echo to every word uttered? Not only is it absolutely obnoxious, but it’s also ten times worse than you can imagine when the characters break out into song. It’s at this point I’m double checking my teeth making sure none of them are a false one with a cyanide capsule hidden in it that I can use to escape the hell this movie had brought me too. It was so bad my wife kept staring at me in disbelief at how atrocious this film had become. 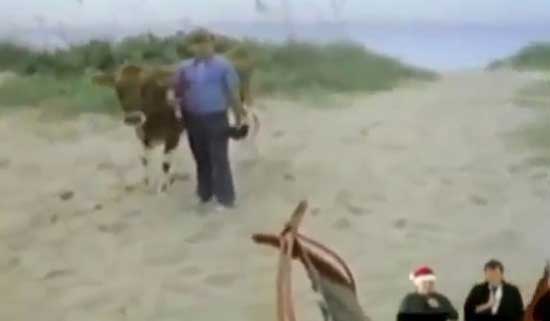 A few more attempts to get Santa’s slay out of the sand fails utterly until a furry fetishist in a rabbit outfit, or perhaps this was actually supposed to be an abnormally large rabbit (hard to tell at this point) shows up driving a convertible. This is the Ice Cream Bunny apparently. Who he is is never really explained, or if they did, I was suffering too much to really pay attention anymore. Anyways, he gives Santa a lift so he can get back to the North Pole. The worse part, after he leaves a bunch of kids start checking out his sleigh, which immediately disappears. I’m assuming it transported itself to the North Pole, and if that’s the case and the sleigh could teleport itself to the North Pole all along, then WHAT WAS THE FREAKING POINT OF THIS MOVIE?! 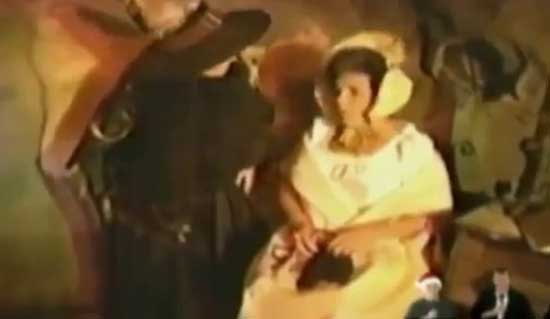 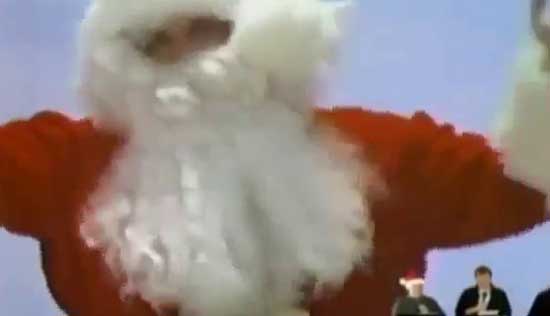 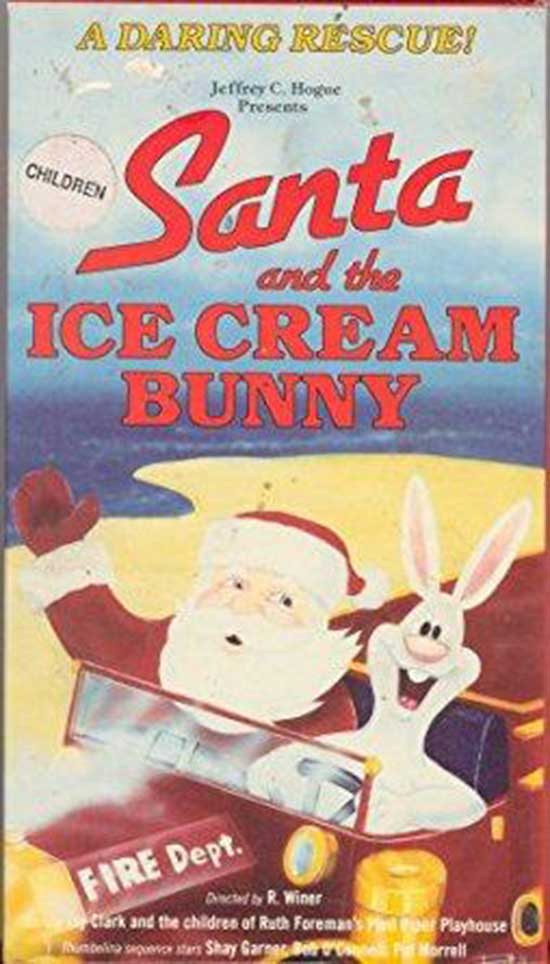 This film was a descent into the bowels of hell. There was nothing redeeming or tolerable about it. The acting was atrocious, the songs terrible, and the audio was something that could be used as a form of torture. Santa and the Ice Cream Bunny was an utterly pointless film with no real message to it, and it didn’t have anything in it to make it remotely entertaining. I can’t recommend anyone watch this movie ever. I may have a blackened shriveled husk of a thing that acts as a heart, but I’m not enough of a monster to try to get anyone to watch this movie.