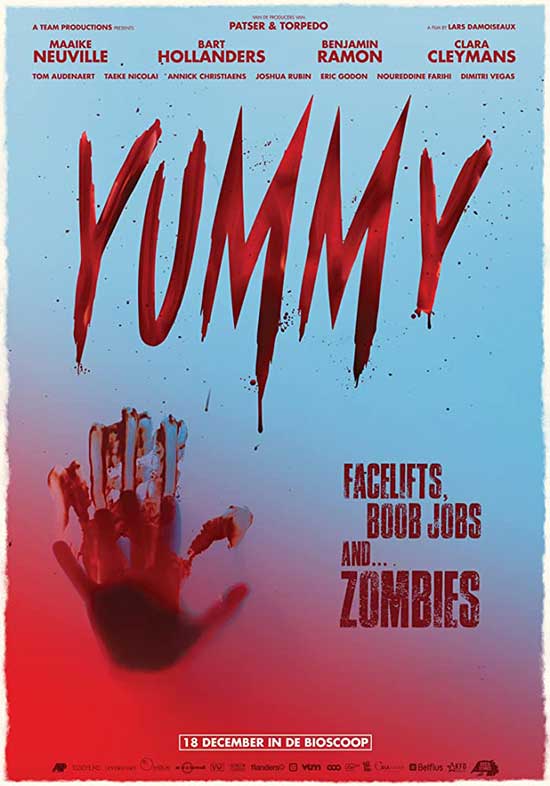 “Yummy” could have just as easily been called “Moist”.

The film begins with Michael and Alison and her mother, Sylvia, driving to a plastic surgery clinic somewhere in Europe. Alison wants a breast reduction, and Sylvia, already a surgery junkie, wants some liposuction. The trip gives the viewer enough time to learn that the couple love each other, the mother dislikes her daughter’s choice in men, and Michael is a nervous klutz who dropped out of medical school because of his revulsion to the sight of blood.

It seems the clinic is not as new or as spotless as the web site indicated. In fact, it looks like a Cold War relic. Another demerit for poor Michael who is already wondering about the safety of his beloved. 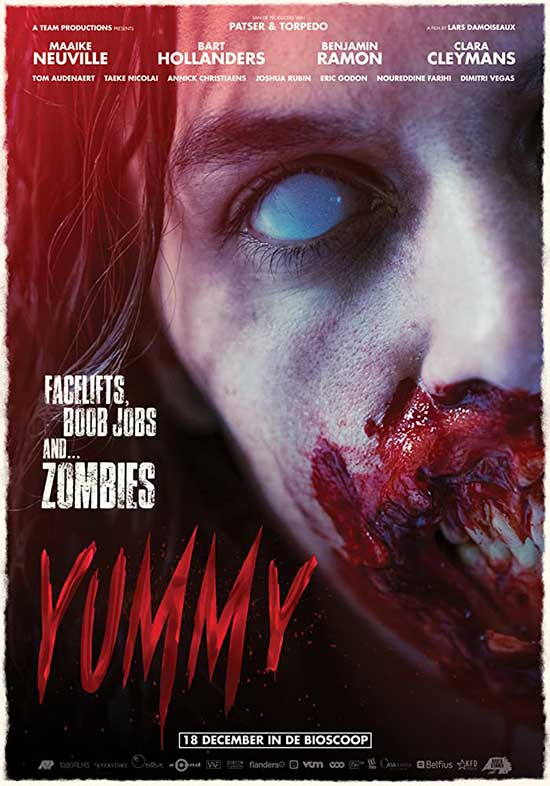 While on a tour of the building as Alison and Sylvia are readied for their surgeries, Michael discovers a young woman strapped to a bed. A strange mask covers her face. From her struggles, he fears she is having trouble breathing, so he removes the covering. It seems she has chewed off her own lips, and she does her best to bite Michael. Fearing discovery, Michael flees.

Unfortunately, the patient begins to chew through her bindings.

When Michael attempts to rescue Alison from her surgery so they can escape, the whole facility goes into a state of panic as patients and doctors begin attacking others, eating them. Michael the doofus unleashed a zombie plague in the clinic!

“Yummy” is a comedy. Far from the first zombie comedy, but the humor has a dark, almost mean-spirited tone that is both fitting and distracting in turns. Michael ends up the butt of a number of situations. At first, the scenes make him relatable. Soon enough, the humor fades. The movie just seems to want to kick him around until he is needed for this or that plot point.

Beyond abusing a lead character, the humor, though occasionally entertaining, tends to devalue some intensely savage and graphic violence. Yes, we can appreciate the “oh, no, not again!” humor of another failed attempt to escape the flesh eaters, but when that laugh fades to a cringe because of the mutilation on display, maybe the horror should be horrific and not a failed punchline.

If you want blood, guts, graphic assaults on people, and eye-widening mutilations, “Yummy” will work for a quick fix. Mixing practical and CGI effects into a mostly seamless string of gory images becomes the film’s crowning achievement. The camera never lingers in an effort to show off, but it makes you aware the stakes faced by the characters are survival or body-shredding death. Hell, the zombies even unspool their own intestines or consume their own limbs if fresh meat is not available. Kudos for the consistently uncomfortable level of gore, which is why “Moist” would be as good of a title as “Yummy”.

Do keep in mind that this film is from Belgium and has not been redubbed. While sound effects are clear as can be, the volume of the dialogue varies. Add to that the heavy accents and occasional rapid delivery, and you may find yourself struggling for details of the conversations. On the plus side, the story is simple enough that it can be followed visually. However, if you have to option to use subtitles, give it a try if you want to follow some of the more verbally-dependent scenes. 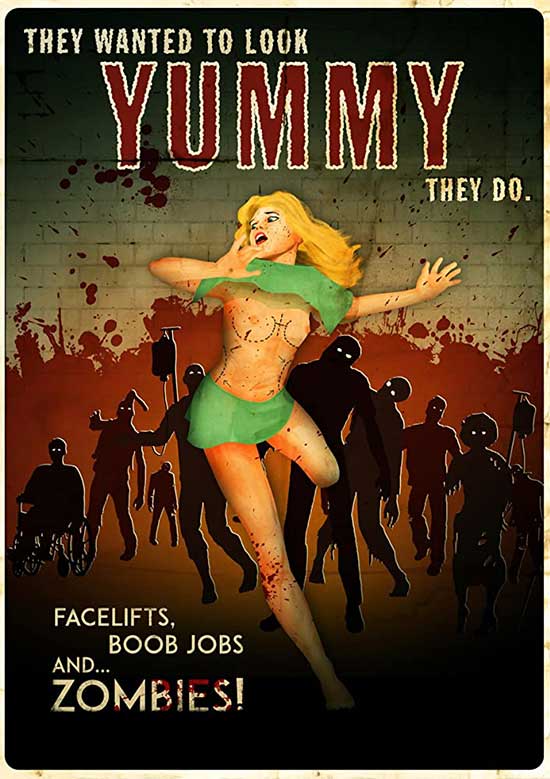 “Yummy” is not the next “Shaun of the Dead” by any stretch of the imagination. It feels like a sedate homage to Troma. No character is safe from attack or even death, and whatever happens is often splattery and over the top. When the humor works, you may roll your eyes a bit, but your gaze is unlikely to veer far from the copious amounts of blood and intestines. Let’s face it; they are your primary motivations to watch “Yummy” in the first place.