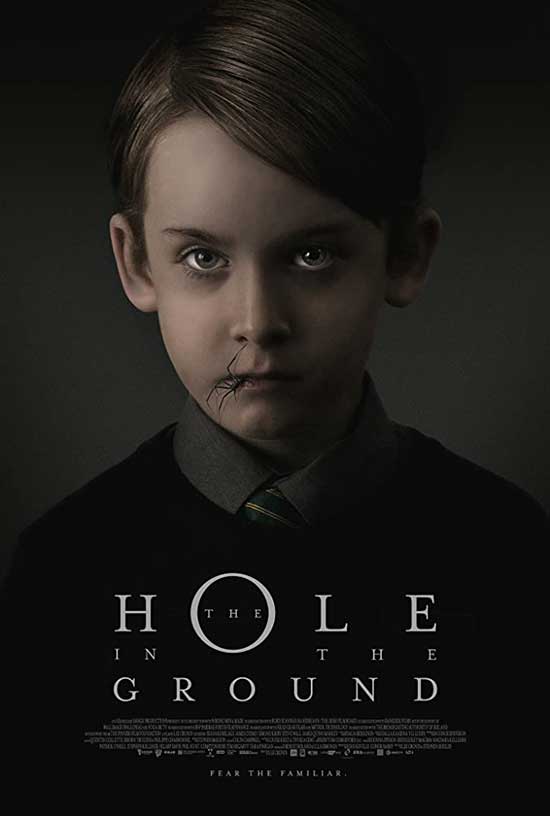 A single mother living in the Irish countryside with her son begins to suspect he may not be her son at all, and fears his increasingly disturbing behavior is linked to a mysterious sinkhole in the forest behind their house.

Sarah O’Neill recently moved into a remote house with her young son, Chris. The dad is not in the picture due to hinted-at spousal abuse, though this is never openly confirmed. Sarah tends to her son while attempting to strip the peeling wallpaper from the house’s walls and working at a local “junk” shop that resells previously-owned items.

After being in the area for a while, Sarah hears about a local resident who suffered a bit of a breakdown. Seems the woman was convinced her son had been replaced by an imposter, a changeling if you will. Her son died, and the woman was treated for mental illness, though her mind remained broken by the experience.

Shortly after learning all of this, Sarah, after an argument with her son which ended with him fleeing into the nearby woods, discovers a massive sinkhole in the middle of the forest. She finds her son, and everything is back to normal.

Except her timid, frail-acting son is now confident. He pushes back instead of submitting to the simplest requests. His near-paralyzing fear of spiders is gone as she watches him eat one with gusto.

Maybe that crazy lady knows something everyone else is missing. A mother should know her own child, right?

From that description, and from watching the trailer for “The Hole in the Ground”, one could easily think this would be a nice horror tale that strikes at the heart of a mother’s bond with her child.

Do not believe everything you see or hear.

“The Hole in the Ground” looks great. Yes, you get the tiresome “we have a 4k camera on a drone” shots, but the imagery and camerawork are the best elements of this film. A fine suggestion would be to put on some ponderous music to listen to, then mute the movie. Dialogue is fairly minimal in the film, so you will not lose much by avoiding it.

Actors in the film, from Seana Kerslake as the mother and James Quinn Markey as Chris to minor supporting characters, do an excellent job. Sarah seems appropriately confused/horrified/dumbfounded as needed, and Chris offers up convincing looks of brooding evil as well as timid helplessness.

What “The Hole in the Ground” suffers from is the script and its assumptions that viewers are on the same page as the screenwriters.

At the risk of ruining the film for those who have not seen it, this film is less of a horror film and is more of a 90+ minute window into mental illness and piss-poor parenting.

In the pivotal scene that results in Chris’ change from timid to aggressive, the son questions why his dad is nowhere to be found. Throughout the film, we are told about a scar Sarah sports from an “accident”. The implication is that it came from abuse by the husband. Chris is not a baby. She could explain that the dad hurt her, and she left because she was afraid of being hurt again, or, worse, that Chris might be hurt. She does nothing.

The kid is obviously struggling simply because he is kept in the dark about why his life has gone through a major change. The one person he has to look to for help and information refuses to give him any. Can you blame him for wanting to escape a parent who is failing to do their job?

Another scene has Sarah awakened by a loud banging somewhere in the house. Most people would be up and checking every room and turning on every light. Not Sarah. She minces about and stumbles through the dark. She doesn’t even call out her son’s name for minutes while the banging continues.

Yet you are expected to identify with her. Someone should consider confronting her about her priorities.

On the other hand, Sarah exhibits signs of mental illness, possibly as the result of the abuse. Perhaps the escalating horrors in her world are simply manifestations of her growing inability to deal with the life she has dropped herself and her son into, or as a result of the year-old head injury that is constantly referenced. People become strangers during certain mental episodes or because of traumatic brain injury. What could be more devastating to a person who is already questioning most everything in their new life than to have their only anchor, Chris in this case, suddenly cease to be the person they thought they were? Her mental state has deteriorated so much that she sees her own dependent child to be against her.

While the mental health angle could have saved the film, the film relies too much on obvious music and sound stings to make you aware something is happening in the story or in the characters’ minds. If used subtly and sparingly, it can be effective. Here, the viewer is smacked in the face with it often, starting with the very beginning as a roaring noise builds and builds before dropping into a quiet introspective piece as Sarah puts on her “What have I done?” expression that the viewer is treated to over and over throughout the film. Eventually, cringing becomes the most likely response to the musical manipulation.

“The Hole in the Ground” is far from the worst movie out there. As previously stated, it looks good and the actors are all fine. If only we could have a main character that we are given reason to side with and were not being hit with obvious musical cues, the experience would have been more sublime.