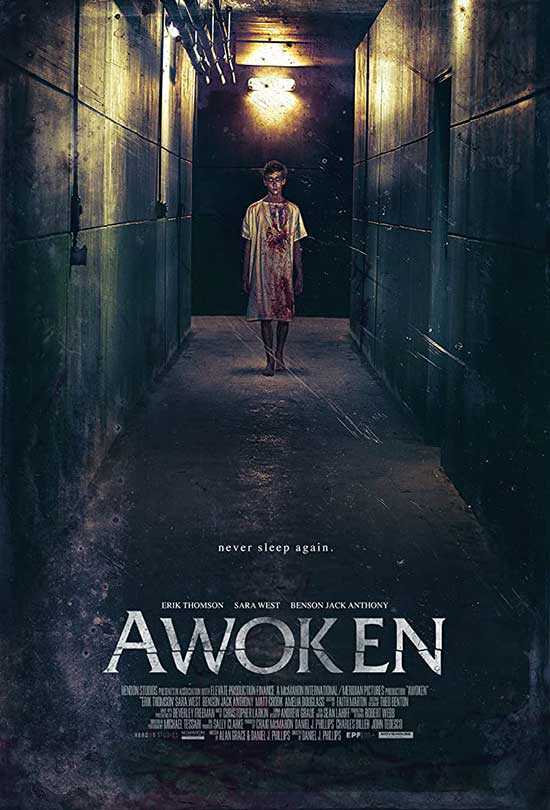 A young medical student attempts to cure her brother from a terminal sleep illness called Fatal Familial Insomnia, where you are unable to sleep until you die. On her quest to help him, a more sinister reason for his condition is revealed.

As someone who has battled mild forms of insomnia (much due to anxiety) over the years, I’ve developed a fascination for how others more severely afflicted cope. Or, at least, how their lives are impacted. Sleep studies, psychiatric therapy, medical testing and a list of prescribed medications as voluminous as the day is long. Some even have tried holistic approaches. I doubt few have sought out their local priest or church exorcist. A unique method  that would win under the “Never Been Tried” category in a competition organized by the local research institute. 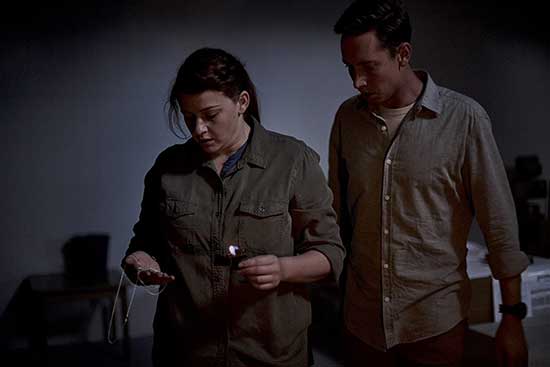 Having a representative of God on hand should a pesky demon decide to prey on the sleep-deprived for purposes of rebirth and causing general chaos certainly wouldn’t be a bad idea in any regard. At least that is the idea proffered by Australian writer/producer/director Daniel J. Phillips in his latest chiller effort Awoke. Centering on the rare, real condition of Fatal Famial Insomnia, an inherited Prion disease that affects that area of the brain that controls the sleep cycle, the Thalamus. Ordinarily this would end up as a 60 Minutes piece on CBS. However, when you add a demon from Hell who thrives on possessing the sleep-deprived and can be resurrected as its own being given that the proper incantations are muttered, you have a bonafide goose-bumper fest in the making. And what an entertaining, skillfully acted and shot thrill ride this is.

Karla, a medical student, cares for her brother Blake, who is in the early stages of the aforementioned FFI. Usually the condition targets people between the ages of 32 and 62 but has gripped 18 year olds on rare occasion (per rarediseases.info.nih.gov). Blake is in an early but fast-progressing stage that ordinary medicine can no longer help with. His mom had the same condition and was admitted by the siblings’ dad to a secretive program held in the basement of the medical school Karla is enrolled at. Karla’s doctor/instructor Robert recommends that Blake also be taken into the program. What she (as well two friends accompanying her) are unaware of is that there is a far more sinister plot centering around a demon named Iddimu and Robert. Could chaos and bloodletting be all that is left of Earth’s future?

Awoken has much going for it but it is hampered, somewhat, by its reliance on the rather tired “found footage” formula to make up much of its narrative. For any who have already viewed works from The Blair Witch Project to V/H/S and other more recent ones, what was original in concept of the horrifying imagery come to documentary feel life de-evolved over time to become a tool for filmers to use when needed to advance the action in a story. There is also a tendency for this method of exposition to bog down a pace of a film. While it is well-constructed technically by Phillips here it felt, in a sense, familiar to me in spots where I thought I should be surprised/shocked/wondering what will happen next.

These are the moments where I should be firmly, uncomfortably seated on the edge of my seat as opposed to softly leaning against the seatback. Phillips more than makes up for it with some effectively creepy, static camera shot scenes (a favorite of mine as it really builds the slow dread atmosphere critical to a horror project success) and use of spotty, dim artificial lighting for further bleak effect. He makes excellent use of a basement set in the Hendon Studios in Hendon,  Adelaide, Australia for the bulk of the events. The script, written by Phillips and Alan Grace, nicely eschews the wordy in favor of letting facial reactions,  body movements and the camera itself relay what is happening. A reminder that there are those in the industry who still be minimalism can be a positive trait.

Cast-wise, Erik Thomson really scores as the heavy Robert. I half-expected a rapid disintegration into a cackle and wild-eye stares not unlike many a horror star of years past. Instead, Thomson reaches for the underplay arrow in his quivver, giving Robert a muted, solid conviction to purpose (with an air of deluded thrown in for measure). Benson Jack Anthony similarly registers strongly as Blake, a combination of sweetly naive, troubled, yet with a hint of malignance growing behind his eyes. Sara West is also a standout as Karla, devoted to her brother yet terrified as to what is becoming of him. All with an inner strength that puts her above the stock and trade scream queen of filmic yore. Special notice should be given to the film’s Director of Photography Michael Tessari, winner of Australia’s prestigious Cliff Ellis Award for the young cinematographer in the industry who exemplifies the greatest potential. I was suitably impressed with odd camera angles utilized in the VHS tape footage as well as just how each scene was framed as if looking at something slightly askew. His slow tracking shots, especially in the dream sequence Karla has late in the picture as she approaches her brother from behind in a hallway truly add a level of unease to the proceedings.

If you are looking for the type of horror entry that de-emphasizes gore and quick-cut editing in favor of a solid script that is happily light on dialogue at times, a solid cast, and a director skilled at bringing it all together neatly, Awoken just might be the fare for you.