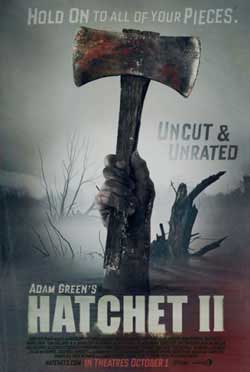 Marybeth escapes the clutches of the deformed, swamp-dwelling iconic killer Victor Crowley. After learning the truth about her family’s connection to the hatchet-wielding madman, Marybeth returns to the Louisiana swamps along with an army of hunters to recover the bodies of her family and exact the bloodiest revenge against the bayou butcher.

Hey acolytes, what’s up? I seem to be in a cheery mood today but don’t let that fool you. I will visit you if you don’t keep up with your nightly prayers to me. Some of you haven’t & I know who you are..I’ll be seeing you soon. 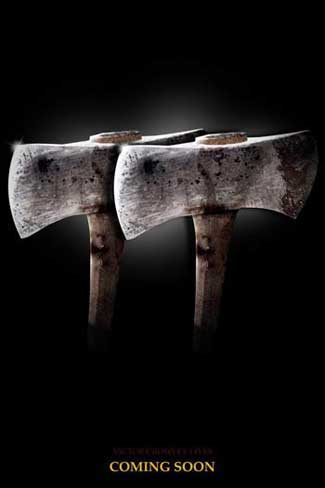 Actually I think I’m in a cheery mood because I just came in from watching Adam Green’s “Hatchet 2” & althought the movie was no great shakes (more on that in a second) I was the only one in the theatre! HOO BOY!! I love being alone in a bijou watching a movie. It’s like having your own 200 seat screening room with a booming sound system. Of course I was probably the only one there because nobody has heard about this movie more than likely or maybe they’ll be around tonight. But since the movie is getting a token unrated release before it’s DVD/VOD debut shortly it’s probably easier for those who want to see it to just wait. But I have to wonder: Why release any film unrated nowadays? Even if it’s only for a week or so? I mean no one is going to accept advertising for an unrated movie nowadays, no radio spots, commercials or newspaper ads for unrated movies nowadays.

So how do they expect to make any money (I’m talking to you “I Spit On Your Grave”)! I know that the DVD/VOD release will cough up a few extra bucks amongst the die hards but would’nt it be simpler to make a couple of judicious cuts & release it as an “R” rated film & have it open on 2-400 screens rather than 10? It would make a couple of million on it’s debut weekend I’m sure & then when it fades away & they’re ready to release the DVD, release that as the urated, uncut director’s version. Then they might have some good coin falling into their coffers. But who am I to say? I’m just the lord of all that is unholy, The Black Saint. Not a movie executive or studio head..

Enough of that, to the movie! “Hatchet  II” picks up pretty much directly where the first left off. Marybeth (Danielle Harris) escapes Honey Island Swamp & goes right to the first house she can find. she is taken in by Jack Cracker (John Carl Buechler) & he tells her he’ll get her home soon enough until he finds out her story. At that point he wants her out of his cabin immediately. He doesn’t want Victor to think he’s helping her or vic will come for him as well. He tells her where to find the main road, points a rifle at her head & demands that she leaves. She, of course does & he of course is killed by Victor 5 minutes later. He was right, Victor has a big f*cking mean streak on him. She makes it back to where the whole adventure started at The right Reverend Zombie’s (Tony Todd) home to tell him what has happened. He seems to be more upset about the loss of his tour boat from the first film rather than everyone who died. She then tells him where they ended up & his demeanor instantly changes. They weren’t supposed to go near “that part of the swamp”. That’s Victor’s territory & nobody goes there. He then proceeds to tell the “True story” of Victor Crowley to her. 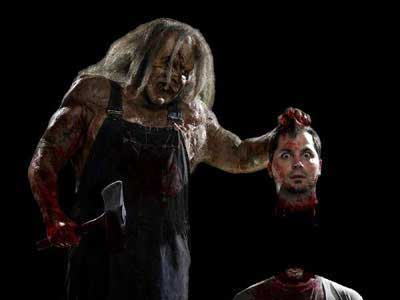 It seems that many years ago Victor’s father, Thomas (Both parts are handled nicely by Kane Hodder) lived in the swamp with his wife Shyanne. They were happily married & lived alone in the swamp. But Shyanne had cancer & was dying a slow agonizing death. They had a nurse come in to help Shyanne daily by the name of Lena (Erika Hamilton) who over time caught the eye of Thomas & they eventually began a torrid affair while his wife lay dying. Just before she dies Shyanne curses them both & the child she knows that Lena is carrying, Thomas’ child. She then dies. When Victor is born he comes out misshapen with lumps all over his body. Lena died at her first sight of him. But Thomas does the right thing & tries to raise Victor properly at home. Eventually coming to love the boy as any father would love his son. Then fast forward to the first film where Victor is accidentally killed by his father because of some kids that were taunting them & set fire to their house, again accidentally. Reverend Zombie explains that Victor is a “Returner”. A ghost who won’t leave the scene of his death until he gains his revenge on whoever caused his death. But how do you kill a ghost? Marybeth claims to have hurt him & if you can hurt him you can kill him.

Rev. Zombie “Hatches” (I couldn’t resist…sorry) up a plan to kill Victor once & for all to make that part of the swamp free of Victor so he can use it to make money on his swamp tour business. So he gathers up a room full of hunters & makes his proposition to them. Half of them leave as soon as they hear the name “Victor Crowley”. Those who stay are in it for the $5000.00 offered for Victor’s head. And so they begin but with one caveat for Marybeth, she must bring along a member of her family to the hunt or it’s off. She refuses at first but eventually relents & brings along “Uncle Bob” (“Child’s Play” director Tom Holland). Together they number 11 counting the Rev., Marybeth & Uncle Bob. It would be too much to name them all but if you haven’t figured it’ll end up with Victor facing off against Marybeth one last time you need to watch more of these types of movies. 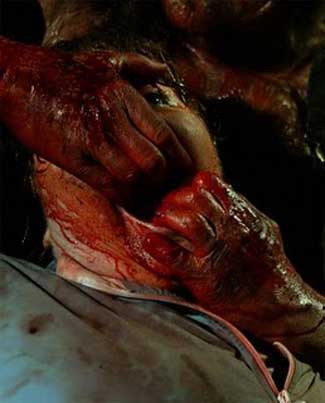 The script is quick to get us into the action but rather pedestrian overall. There are a couple of very funny in jokes concerning “Friday the 13th’ & “Leslie Vernon- The Rise & Fall Of A Serial Killer“. The reason Director/Writer Adam Green comes up with for bringing along one of Marybeth’s uncle is that he was one of the kids that set Thomas Crowley’s house on fire which lead to Victor’s death & he believes that if Victor can kill him & one of the hunters who was also in the crowd that started the fire, Victor will be avenged & go away, never to return. But again I ask & so does Marybeth..what if he isn’t a ghost? The Reverend’s idea is to shoot him in the head. Cut it off, that ought to do it. Yeah right….

No need to get into the particulars of the rest of the movie except for the one “Twist” towards the end which is actually kind of clever. Everyone is slaughtered in various ways & for the real gorehounds out there (me included) you won’t be disappointed. There are some kills in here I’ve never seen before & the longest chainsaw ever is put to heinous use by Victor in one cool scene. There is the obligatory sex scene (in the filthy swamp no less) which is actually very funny but the kills ultimately are the only reason to see “Hatchet 2“. They are varied & brutal to the extreme. But the film itself really makes no sense if you think about it (which is why I try not to think about films like this..just enjoy them). But I ended up thinking & questions did arise. The main one being, “Why do they think they can kill a ghost”? Even Marybeth starts to believe he’s a ghost of some sort..a “Returner”. When she obviously knows she hurt him in the previous entry of the franchise.

Which leads me to one last question..Why did the ending of this movie suck so bad? It literally just ends. I even waited for the credit roll to end because I just knew something was going to happen. But no…nothing. It just ended. And if that indeed was the intended ending then Victor Crowley will no longer be wielding his hatchet across movie screens any longer. I thought the first film was great fun & was anxiously awaiting this one because it seemed we had a new Horror franchise in the works. But sadly no. But then again, anything is possible in Horrorwood isn’t it? Freddy’s been back, Jason, Michael, Pinhead, Chucky, Jigsaw….the list goes on. But after this ending I don’t see how they could bring Vic back & that’s too bad because the series has potential. Maybe Green had bigger fish to fry, “Frozen” was ok in concept if not in execution. But I would’ve liked to see more of the adventures of Victor Crowly & now sadly I won’t or at least I shouldn’t. But if this is the last of him..he went out with a bang. His final kill of Rev. Zombie is one of the most original & downright f*cking nasty kills I’ve ever seen on the silver screen. It’s actually brilliant. All of the kills are special but the best was saved for last. It should go down in Horror history as one of the most original kills ever.

But because of the pedestrian script & the absolutely awful ending I’m only giving “Hatchet 2” 2 1/2 Shrouds out of five. It should’ve & could’ve been so much more. I hate to see potential thrown to the wolves but I’m afraid that’s the story here. By the way if you’re interested director Adam Green has a cameo a few minutes into the film as a drunk spewing vomit on a city corner. It looked pretty real to me, maybe they filmed that scene last & he saw what a mess he made of his movie while watching dailies.

That’s all for now you f*cking bottomfeeders. I’ll be back soon enough, hopefully with a better movie to regale you with. Until then, Say Your Fucking Prayers………..I’ll be listening.