More short films, kiddies! Today we have THE RADIO KING, written and directed by Hannah & Bing Bishop. They are a brother and sister pair of filmmakers.

So I couldn’t find very much about this film at all, and the credits on the film itself don’t break down who is playing who, so I’m gonna have to wing it a bit on this one.

The film opens with a placard showing a passage from an epic poem by Johann Wolfgang von Goethe called “The Erlkönig” (The Elf-King). Written in 1782, the poem tells the tale of a child being seduced by some kind of supernatural creature. Traveling with his father, only the child can hear the voice of the being. 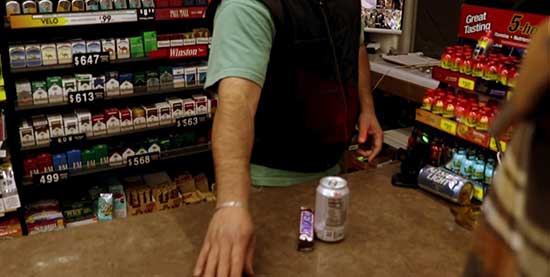 As it relates to this film, our story focuses on two brothers traveling to see their mother and meet her new boyfriend. This night is a special night, as it is the anniversary of something called “The Nowhere Murder/suicide”. As the brothers talk during the long car ride, we learn that they may be the sons of the man who committed the crimes.

The younger of the brothers keep hearing voices through the car radio. The older brother doesn’t hear it, of course. But we also learn that the younger brother has this happen every year at the anniversary of the crimes.

I feel like this could be part of a larger story about these brothers and the aftermath of what they experienced. As it is, we get just a small taste of what has happened. The film is really lo-fi which I like a lot. The audio isn’t great, that is to say the dialogue isn’t well produced. But the sound production, the audio FX, is really cool.

While we don’t get a lot of the story about them, what we do get is an ambient and sensory adventure. I enjoyed this film quite a bit.