The automotive industry was, and still is, on life support. It’s going to take some real marketing genius for the public to change their view of it. They sold gas-guzzling behemoths and poorly made, often dangerous, economy cars for decades.

Even their “environmentally friendly” hybrids have come under fire regarding their production, reliability, safety and inevitable trip to the landfill. 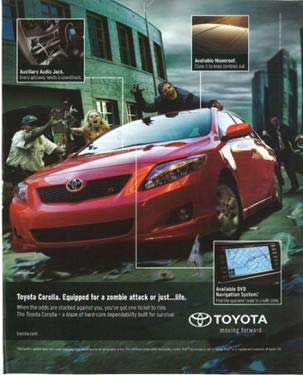 . And, while companies like Ford are reporting operating profits over a billion dollars they seem to be desperate to get their hands on the future customers who will turn them around in the long run. How are they proposing to do this? Zombies.

Ford has a new campaign for the stateside relaunch of the Fiesta, a zippy little compact that hasn’t been sold in the United States since the 1980’s and looks to reinvigorate their youth market.

This zombie ad was produced through a project called Fiesta Movement which was an experiment created by ad agency Team Detroit with support from Undercurrent and AMG.

They gave 100 people, called “agents” a Ford Fiesta to try out for six months and in exchange they would create web content about how the car fit in to their lives.

One of these agents, Los Angeles photographer JoNATHAN Nafarrete showed what the Ford Fiesta ultimately means to him…zombie preparedness.

First and foremost, it’s user generated content from someone who actually IS in the demographic they are looking to reach. It’s funny, witty and doesn’t take itself too seriously but gives respect to the genre. Corporations are finally hearing what we’ve been trying to say for years. Don’t appropriate our icons unless you understand them. Either let us do it ourselves or stay the hell out of our sandbox. Ford did something right by building a sandbox and inviting us to play in it. In speaking with Scott Monty, Head of Social Media at Ford Motor Company, about how this ad came to be he told me….

“All we asked was that they creatively find a way to showcase one or two of the 15 class-exclusive features in the car. Our agency produced the series, but otherwise, this was consumer-generated content”.

Want see what it looks like when someone in a boardroom who doesn’t have a clue says “zombies are cool, right”?

Don’t tell me your car is “equipped for a zombie attack” because it’s got an audio jack and a moon roof. The last thing I’m thinking about while being chased by brain eating undead is blasting the Yeah Yeah Yeahs. And a moon roof is just another easy entry point for said zombies. This vehicle doesn’t have spikes that come out of the wheels, a holder for my machete and the last thing I want to worry about in a zombie apocalypse are my brakes failing as I try to run over the mailman who wants to gnaw on my face.

The undead have been reduced to a single, lumbering horror stereotype that advertisers are latching on to, publishers are devouring and game developers are eating up. The horror community can turn their heads the other way and ignore it or we can scoff at the appropriation of the zombie myth but neither is very useful to us or them. What we can do is educate, create and celebrate.

Educate people about the art being inspired by the undead phenomenon. Like Rob Sacchetto and his fabulous zombie portraits. Web comics like The Zombie Hunters and Everyday Decay and graphic novels like The Walking Dead .

Whatever your flavor of undead there is something for you and the truth is we have yet to uncover a host of amazing myths and folktales from around the world. As we try to hold on to what is sacred to us, our lovable lumbering brain munching pals, keep in mind that every day you will meet someone who hasn’t been introduced to the world of zombies in the way many of us have. Bring them into the fold and show them what we’re hiding over here. Create and share your own zombie stories and art. Your tale of a zombie apocalypse could be groundbreaking, but if we don’t see it you’ll never know. And celebrate your love of zombies, even if people think it’s weird. The more weirdos we have on our team the more fun this world will be.

Go forth and embrace the undead…just be careful, they bite.